As seen in my last post about the Basch family, the children of Lena Goldsmith Basch suffered two losses in 1915. Their brother Jacob died on April 5, 1915, and Ella’s husband Isidor Shatz died seven months later. But not all the events of the 1910s were sad ones.

On February 5, 1917, Lena and Gustavus Basch’s oldest granddaughter, Frank’s daughter Rae, married Sidney Katz in Columbus.  She was twenty years old, and he was 28.

Rae’s younger brother Lewis served in World War I. He enlisted on October 18, 1918, when he was just eighteen. He was discharged two months later after the war ended.9 In 1920 he was back in Columbus, living with his parents Frank and Fred and his sisters and attending Ohio State University. According to the 1920 census, no one in the household was employed.

Joel’s son Sidney Basch also served in World War I. He served from November 1917 until April 25, 1919.10 In 1920, he also was safely back home and living with his parents Joel and Jeanette and brother Gustavus. Joel was still in the tobacco business, and Sidney was a clerk in the industrial slate business.11

In 1920, Joseph Basch and his wife Ida were living with their twins, Elene and Joseph, Jr. Their father Joseph, Sr., was working with his brother Joel in the tobacco business.12

The two sisters, Hinda and Ella, were living together in 1920. Neither had children, and neither was working. The bequests left by their brother Jacob (and perhaps by Isidor Shatz also) must have left them sufficiently comfortable that they did not need other income.13

Thus, as of 1920, the surviving five children of Lena Goldsmith and Gustavus Basch were all living in Columbus, Ohio. 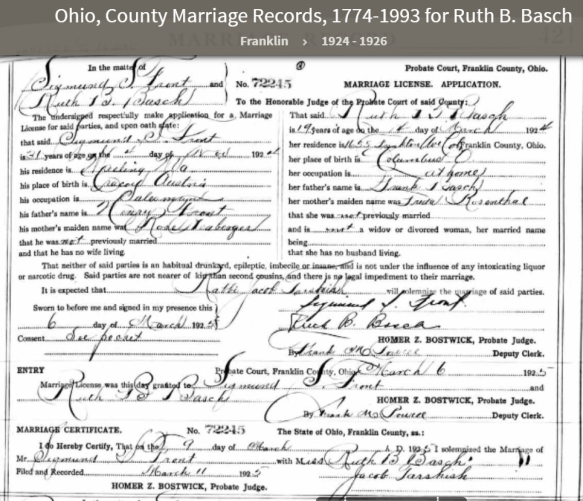 Sigmund was born on November 4, 1893, in Krakow, Poland, to Henry Elias Front and Rose Thieberger.14 He immigrated with his mother and siblings in August, 1899, joining his father who was already here.15 By 1901 the family was settled in Wheeling, West Virginia, where his father was working as a laborer in a brewery in 1910.16 In 1920 Sigmund was living with his family and working, along with his brothers, as a salesman for the gas and electric supplies business now owned by his father in Wheeling and known as The Front Company.17

Their wedding received a lovely detailed write-up in the Columbus newspaper, which also reported that they would be living in Wheeling after their honeymoon:

Wheeling is about 130 miles east of Columbus, Ohio, and I have no idea how Ruth and Sigmund met. After marrying and settling in Wheeling, they had two sons born in the 1920s. In 1930, Ruth and Sigmund and their children were living in Wheeling, and Sigmund was now the secretary of the Front Company, according to the census, although the 1930 Wheeling directory lists him as its president.18

Meanwhile, Ruth’s father Frank Basch and his wife Freda and their two unmarried children, Coryne and Lewis, were still living in Columbus in the 1920s. Lewis studied dentistry at Ohio State University graduating in 1925,  and then he served in the dental reserves.19 In 1930, Lewis was living with his sister Coryne and his parents in Columbus where he was practicing dentistry. He was the only family member with an occupation listed.20

Frank and Freda’s oldest child Rae, who had married Sidney Katz in 1917 and moved to Chillicothe, Ohio, was still living with Sidney and their three daughters in 1930. Sidney was a clothing merchant.21

As for the other Basch siblings, the 1920s were relatively quiet. Joel Basch and his family continued to live in Columbus. In 1926, Joel purchased for investment a building in Columbus, perhaps with his inheritance from his brother Jacob.22 In 1930, Joel was still in the tobacco business and living with his wife Jeanette and sons Sidney and Gustavus in Columbus. Sidney was working as a clerk in a finance company and Gustavus as a salesman in a furniture store.

The youngest brother Joseph and his wife Ida were also still in Columbus during the 1920s. Their daughter Elene was studying at Smith College in the 1920s,23 and her twin brother Joseph was a student at Ohio State University.24  In 1930 both Joseph and Elene were living at home in Columbus, where their father continued to work in the tobacco business with his brother Joel. Neither Elene nor Joseph, Jr. was employed.25

There also do not appear to have been any noteworthy events in the lives of the two sisters, Hinda Basch and Ella Basch Shatz, during the 1920s. Ella, however, was not destined to enjoy the next decade. She died on January 29, 1930, from heart failure; she was sixty-four. According to her obituary, she had been a social worker, although I never saw any indication of that on any of the census records.26 She had been a widow for almost fifteen years and had no children who survived her. Under the terms of her brother Jacob’s will, the property that she had inherited from him now passed to her sister Hinda. Hinda continued to live in Columbus in 1930.27

There were now four remaining siblings left in the Basch family: Frank, Hinda, Joel, and Joseph, all living in Columbus, Ohio. By 1940, there would only be three left.