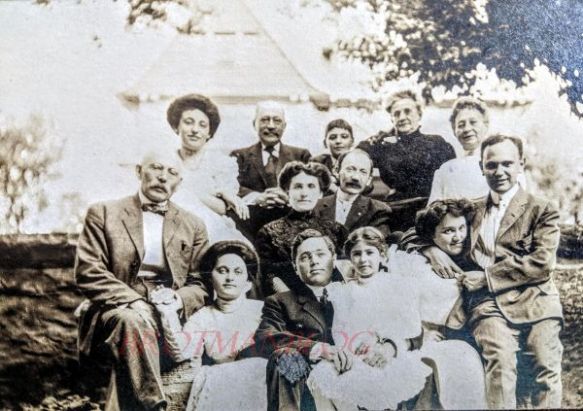 But the inscription on the back of the photograph left plenty of clues as to the identities of the other people in the photograph, and I was able to identify almost all of them after some research and analysis. 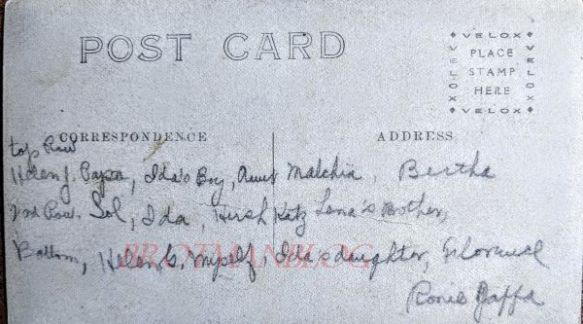 Ronie Jaffa, who signed and labeled the photo, was the son of Henry Jaffa, who was Sarah Jaffa Goldsmith’s brother.1 Most of the people in the photo are Jaffas, some of whom are also related to me through their marriages to Goldsmith relatives. Fortunately, that meant that many of the Jaffas were already on my family tree, making the task of identification easier than it otherwise would have been.

Ronie refers to the man second from the left in the top row as “Papa,” so I thought this must be his father, Henry Naphtali Jaffa. Henry died in January 1901,2 so that would have meant that the photo was taken before that time. But as you will see below, I later revised my thinking on the identity of “Papa” and the date of the photograph.

The first person in the top row is labeled Helen J. I assume the J stands for Jaffa, so that must be Solomon Jaffa’s daughter, Helen. Solomon is sitting right in front of her in the photo. He was Henry Jaffa and Sarah Jaffa’s brother. Solomon was also married to a Goldsmith—Leonora.  Leonora was the daughter of Simon Goldsmith’s son Jacob—i.e., Henry Goldsmith’s brother. Leonora lived to 1911, but she does not appear to be in the photo.

Next to Sol in the middle row is Ida Jaffa Mansbach. She was Samuel Jaffa’s daughter. Samuel was also a brother to Henry, Sarah, and Sol.  Ida also married someone from the Goldschmidt/Goldsmith family. Her husband was Meyer Mansbach, son of Abraham Mansbach and Sarah Goldschmidt.  Sarah was my 3x-great-aunt. She was the daughter of Seligmann Goldschmidt, my 3x-great-grandfather.

Two of Ida and Meyer’s children are in the photo. In the top row next to Solomon, Ronie labeled the young boy as “Ida’s boy.”  That must be Arthur Mansbach, who was born in 1896. Skipping to the bottom row, Ronie labeled the little girl on his lap as “Ida’s girl,” so that has to be Edith Mansbach. but she wasn’t born until December 1901. That means the photo must have been taken more like 1908 because Edith looks around six or seven to me and Arthur looks about ten or eleven.  Also, Helen Goldsmith at bottom left looks older than she did in the 1904 photo seen in the last post. So 1908 seems a likely guesstimate for the date of the photograph or perhaps a year or so earlier.

That means that the photo had to have been taken after Henry Jaffa died in 1901 and thus “Papa” could not be Henry. So who was “Papa” to Ronie Jaffa if not his father Henry? My best guess is it’s Samuel Jaffa, who died in 1909.3 Perhaps Ronie was labeling the photograph for Ida and her two children, who may have called their grandfather Samuel “Papa.”

Returning to the top row, Aunt Malchia was probably Samuel Jaffa’s wife Amelia.  Malchia or Malchen was a German name that often was changed to Amalia or Amelia in the US.  She would have been Ronie’s aunt, so that makes sense. That also bolsters the conclusion that “Papa” was Samuel Jaffa since Malchia is sitting right near him with her grandson in between.

The person next to Aunt Malchia is labeled Bertha, and I have no idea who that could be.

Now down to the middle row. Next to Ida is a man Ronie labeled as Hirsch Katz. He’s also labeled “Lena’s brother.”  So I looked for a Lena Katz in my family tree and found a Lena Katz who was the daughter of Juetel Jaffa, the oldest of the Jaffa siblings—sister to Henry, Solomon, Samuel, and Sarah. Juetel never left Germany. She married Mendel Katz. Their daughter Lena came to the US in the 1880s and lived with Henry Goldsmith and Sarah Jaffa and their children. After more research I was able to confirm that Hirsch Katz was also a son of Juetel and Mendel and also therefore a Jaffa cousin.4

That leaves us just the bottom row. We have Helen Goldsmith, then Ronie Jaffa himself, and then Florence Goldsmith. As for the man with his arm around Florence’s neck, I’ve no idea. Florence wasn’t yet married, so perhaps this was some beau. Since Ronie didn’t label him, maybe he wasn’t really a part of the family.

Thus, to recap, here is a key to the people in the photograph based on my analysis:

Sadly, Ronie Jaffa, who left behind this wonderful key to the people in this photograph, died as a young man.  He was one of the milions of people who died from the flu epidemic. He died on January 28, 1919, at the age of 34. 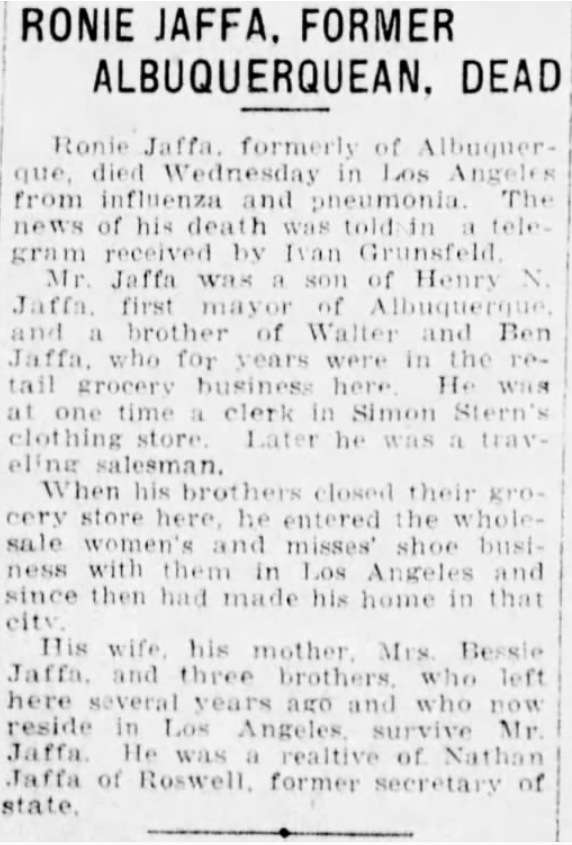 35 thoughts on “A Jaffa Family Postcard”