With Leo’s death in 1913, only four of Ella Goldschmidt Sigmund’s children were still living: Henrietta, Simon, Joseph, and Mollie. In addition, there were numerous surviving grandchildren: William’s five children, Henrietta’s six children, Simon’s son Harold, Joseph’s two daughters Lenore and Celeste, Leo’s two children Edna and Lloyd, Mollie’s three children, and May’s son, Felix Albert Cahn. I’ve already written about Joseph’s daughters and their tragic losses in the 1910s and about Leo’s death and his family’s status in the aftermath. For Ella’s other descendants, the 1910s were not as difficult.

Abe and his wife Helene had a baby girl Marjorie born on April 16, 1911, in Washington.2 They were living in DC in 1920 where Abe was in the women’s apparel business.3

Jeanette and her husband Sydney Kaufman also were living in DC and had a daughter, Virginia Adelaide (in honor of her grandmother Adelaide, who was still living at that time) on August 22, 1913;4 in 1920 they were living in DC where Sydney was in the men’s clothing business.5

Goldsmith Sigmund and his wife Sadye and son William also were living in DC, and like his brothers Albert and Abe and his brother-in-law Sydney, Goldsmith was a merchant; the 1920 census reported that his business was a sports store.6

Howard Sigmund’s wife Lesley gave birth to their daughter Audrey Frances on May 21, 1910.7 Howard, who did leave Washington for short stints in Boston, Baltimore, and Amsterdam, New York, between 1912 and 1914, had returned to Washington by 1914. In 1920, he and his family were living in DC where he was in the women’s clothing business, seemingly with his brother Abe.8

Ella’s daughter Henrietta Sigmund Katzenstein was now a widow living in Cleveland with her daughter Moynelle. Her family’s story during the 1910s can be found here at the blog.

Ella’s son Simon Sigmund was living in Baltimore during this decade and working in the fur business (separately from his father’s business had been run by Simon’s brother Leo.)9

Simon and Helen’s son Harold was now an adult. In 1917 he was working in the advertising department of The New York Times.10 On April 4, 1918, he was inducted into the US Army to serve in World War I. He was stationed overseas from May 1, 1918, until July 12, 1919; his responsibilities included being in the infantry and then working on Stars & Stripes in their advertising department.11

After the war Harold returned to New York City, and in 1920 he was working as an agent for a publishing company, Butterick Quarterlies.12 Meanwhile, his parents remained in Baltimore, and in 1920 Simon was still working in his furrier’s business.13

Mollie and Harry Goldman’s three children were also adults in the 1910s. All three had been living at home in 1910, and L. Edwin was practicing law and Marguerite had been working as a clerk in an insurance office, presumably her father’s office.

The youngest child Adele was also still living at home in 1910, but she was the first of Mollie and Harry’s children to marry. She married Raymond Weil on December 24, 1911, when she was 24 years old. 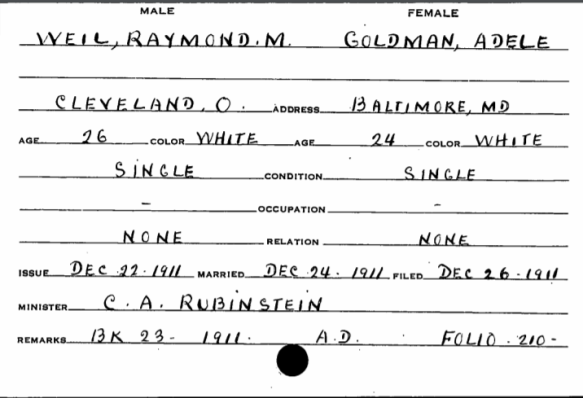 Raymond was born in Wichita, Kansas, on June 1, 1885, to Jacob Weil and Henrietta Wolf.  Raymond’s father died in 1898 when Raymond was only thirteen, and in 1900 he was living with his mother and siblings in Cleveland, working as a clerk for an insurance company.13 By 1910 he was an insurance agent still living in Cleveland with his mother and siblings.14

After marrying Raymond, Adele moved to Cleveland where they had three children in the 1910s. Twins Robert and Marjorie were born October 7, 1912, in Cleveland,15 and Donald was born on August 25, 1916.16 Raymond continued to work in the insurance business as shown on his World War I draft registration and the 1920 Cleveland directory.17

Rita was born in Baltimore on July 6, 1887, to Abraham Strauss and Hannah Selz. Her parents were both German-born, and her father was a dry goods merchant. Her father died in 1905, and in 1910 Rita was living with her mother and siblings in Baltimore, not employed.18

Adele and L. Edwin’s sister Marguerite was living with their parents Mollie and Harry in Baltimore in 1920, working as bookkeeper for an automobile company. Judge Harry Goldman was the financial secretary of a fraternal order.23

Finally, I was most concerned about the fate of Felix Albert Cahn, the orphaned son of May Sigmund and Gerson Cahn. He had lost both of his parents before his fifth birthday. In 1910 he’d been living with his aunt/cousin Mollie and her family. In 1913, when he was just thirteen years old, F. Albert made the Baltimore newspaper for his charitable efforts raising money to help save sick babies.

Did the tragic losses of his parents as a young boy give Albert a special empathy for sick babies? One would think so.

In May 1914, he was confirmed at the Har Sinai synagogue in Baltimore, along with his cousin T. Edna Sigmund, who had also lost a parent when her father Leo Sigmund died in 1913. Albert, as he was known, appeared to be on the path to a good life.

In 1917 Albert entered the US Army to serve in World War I. According to a record found on Ancestry in their Maryland Military Men 1917-1919 database, Albert’s history in the Army was checkered at best. I have sent away for his military records to see if I can get more information, so I will wait until I receive them before reporting more on Albert’s life.

23 thoughts on “Ella Goldschmidt Sigmund’s Family in the 1910s: For Most, A Quiet Decade”