As noted in my earlier post, Regina Goldschmidt and Aaron Meyer’s four oldest children had varying experiences during the Holocaust. Alfred appears to have escaped to France, but I don’t know where he was thereafter. Jacob died in 1928, but his wife and children escaped to England and Argentina in the 1930s; Max had his family ended up in Argentina. And Siegfried was killed at the Nazi concentration camp Theresienstadt in 1943. Their youngest child Amalie escaped to England and then the US. Today I will tell the story of their son Ferdinand.

Ferdinand Meyer had married Friederike Jaenecke, a non-Jewish woman, in 1920, and they had two children, Eleanore and Erich.  Even though Friederike was not born Jewish and her children were only half-Jewish, it appears that they faced persecution as Jews.

Friederike herself is included on a document from the Arolsen Archives that lists the “Deutsche Juden,” German Jews, living in Frankfurt. For Friederike, it records that the “Daten d. Austellung d. Urkunden,” the date of exhibiting certificates, was in 1939. What I didn’t understand is why Friederike was listed here, but not her husband or children.

Also, she was still classified as Aryan (Arisch) on this document found in the Arolsen Archives: 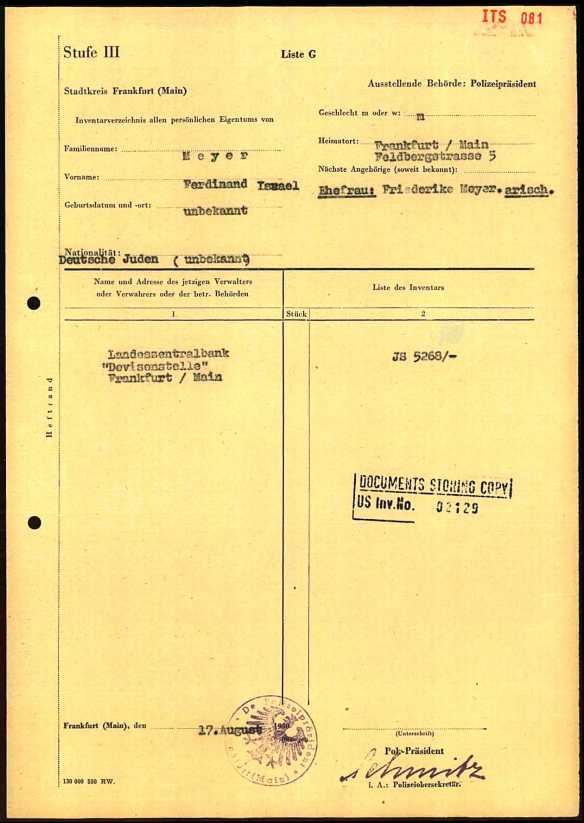 How do I reconcile this? And where was the rest of her family?

On October 31, 1940, Ferdinand left England and immigrated permanently to the US, arriving in Boston on November 16, 1940. The ship manifest recorded that his daughter E. Meyer was the person he left behind in England and that he was going to his son, E. Meyer, who resided at 627 Commonwealth Avenue in Boston, Massachusetts. Thus, Erich was already in the US.

Erich had arrived on March 9, 1940, from England, so he also had escaped from Germany to England, presumably with his father and sister. He was only sixteen when they then put him on a ship for the US. Interestingly, the ship manifest indicates that he was heading to Niagara Falls, New York, as his permanent destination after landing in New York. Handwritten on the manifest it names August Kuhlman of Niagara Falls, New York as the person at his destination, but it also says that he was headed to an aunt, Lotto Karlmuller, who was living at 627 Commonwealth Avenue in Boston.1 That is the same address his father gave eight months later as Erich’s residence, so it appears that Erich did not end up going to Niagara Falls.

Ferdinand filed a declaration of intention to become a US citizen on March 15, 1941. On that declaration he indicated that his daughter Eleanor was in England and his son Eric was in Boston. Friederike must have still been outside of the US because the line indicating when she entered the country is crossed out. The 1941 Boston directory lists his address as 348 Beacon Street and his occupation as “atndt,” attendant, I assume. (He had listed no occupation on his declaration of intention.)2 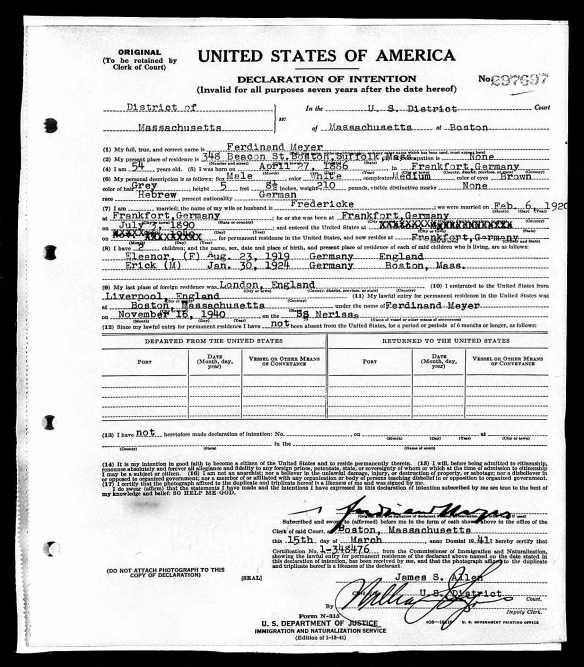 Friederike finally arrived in the US on August 9, 1941. Her declaration of intention to become a US citizen was filed on December 9, 1941, two days after Pearl Harbor. She indicated that her prior residence had been Frankfurt, Germany, so it appears she had not left when her husband and children did, and that explains why only she was listed on the Nazi record that appears above.  Her declaration also states that Eleanora (spelled with the A here) was still in England.

Ferdinand and his son Eric both registered for the draft in the US. Ferdinand listed his address as 99 Norway Street in Boston and also reported that he was self-employed at 152 Massachusetts Avenue in Arlington, Massachusetts. That caught my eye because for six years from 1975 to 1981 we lived in Arlington less than a mile from that address. I was very curious as to what Ferdinand might have been doing there since he lived in Boston, not Arlington, but I had no luck figuring that out.

Erich registered for the draft, changing his name from Erich Adalbert Meyer to Eric Albert Meyer. He was living at the same address as his father Ferdinand, 99 Norway Street in Boston, and was working for Universal Tire and Auto Supply Company in Boston. 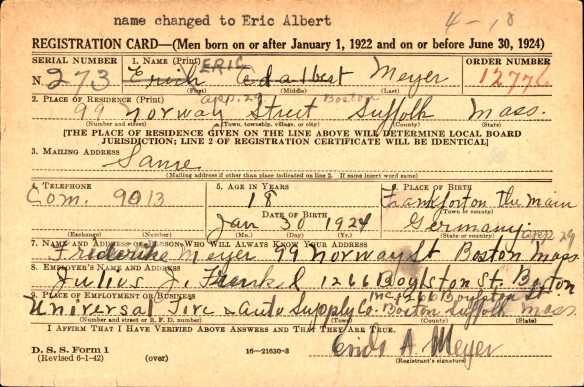 He enlisted in the US Army on June 23, 1944, for the duration of the war.3 While he was in the service and stationed in Jacksonville, Florida, he petitioned for naturalization.

Ferdinand Meyer did not live long after his immigration to the United States. He died in 1946 in Arlington, Massachusetts.4 He was only sixty years old. His wife Friederike survived him by close to thirty years. She died in September, 1974; her last residence was Yonkers, New York.5

Eric A. Meyer survived his parents. He graduated from Northeastern University in 1950 with a degree in mechanical engineering and married Carol Zimmerman in 1953.5 In 1960 they were living in Cortlandt, New York, where Eric was working as a project engineer for Trinity Equipment Company.6 Eric died in February 1987 in Alabama at 63, only three years older than his father had been at his death;7 his wife Carol died in 2010.8 They were survived by eight children and numerous grandchildren and great-grandchildren. 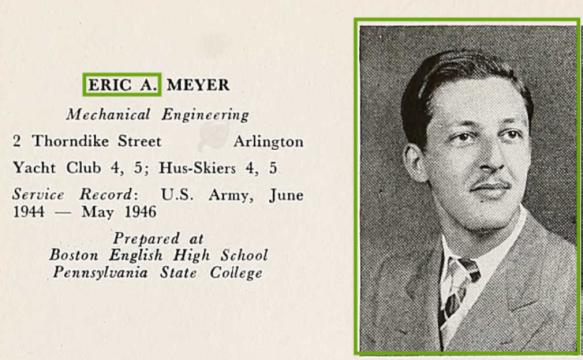 I’ve been able to connect with one of Ferdinand and Friederike’s grandchildren, and she told me that Eleanore Meyer remained in England. She married a man named Francis Alban Cowper in 1948 in Chaddesley Corbett, Worcestershire, England, and they had five children.9 Thanks to my newly found cousin, I now have an obituary for Eleanore; she died on December 23, 2013, in Chaddesley Corbett, and was survived by her children and grandchildren. She was 94 years old.10

Unfortunately, my newly found cousin was unable to answer some of the questions that remain unanswered. For example, she didn’t know why Friederike did not leave Germany when her husband and children left. Did Friederike think that she  would be safe because she was not born Jewish? Had Friederike stayed behind for health reasons or to protect the family’s property? We don’t know, and we don’t know what her life was like between the time Ferdinand and her children left and her own departure from Germany.

So many questions left to answer, as there always are.

20 thoughts on “Ferdinand and Friederike Meyer: Why Did She Stay Behind?”