The third surviving daughter of Amalie Goldschmidt and Juda Katzenstein was Henriette. As we saw, she was born on February 13, 1858, in Eschwege, and married Simon Schnadig on August 20, 1877, in Eschwege. Henriette and Simon had four children—Julius, Helene, Betty, and Elsa—-but only three survived to adulthood.

Their son Julius only lived two years. He was born on May 13, 1878, in Frankfurt, where Henriette and Simon were then living, and died in Frankfurt on August 13, 1880. 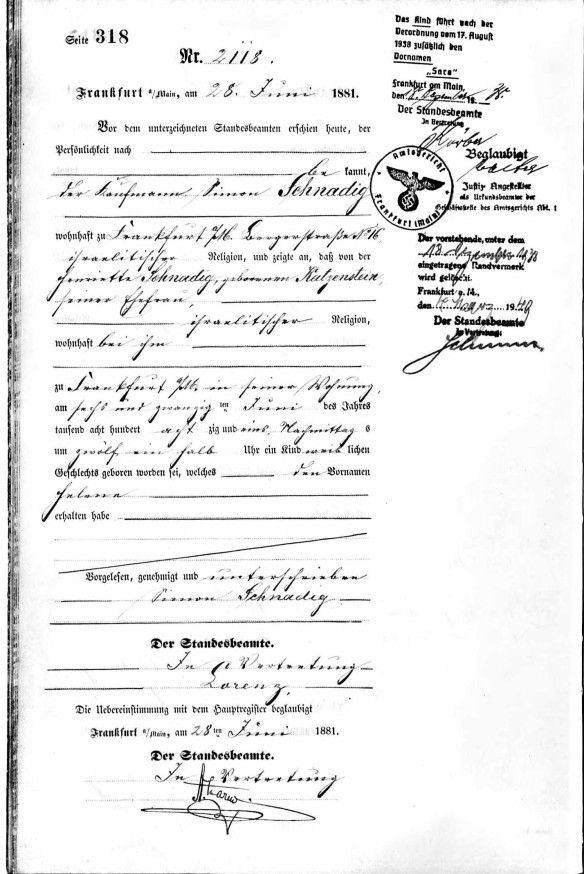 I found it odd that Henriette named her daughter Helene since that was the name of her older sister, who was definitely still living in 1881, and I cannot find any other close relative of Henriette or Simon with that first name. Perhaps the Hebrew names were different.

Betty Schnadig, the second daughter, was born August 27, 1882, in Frankfurt. 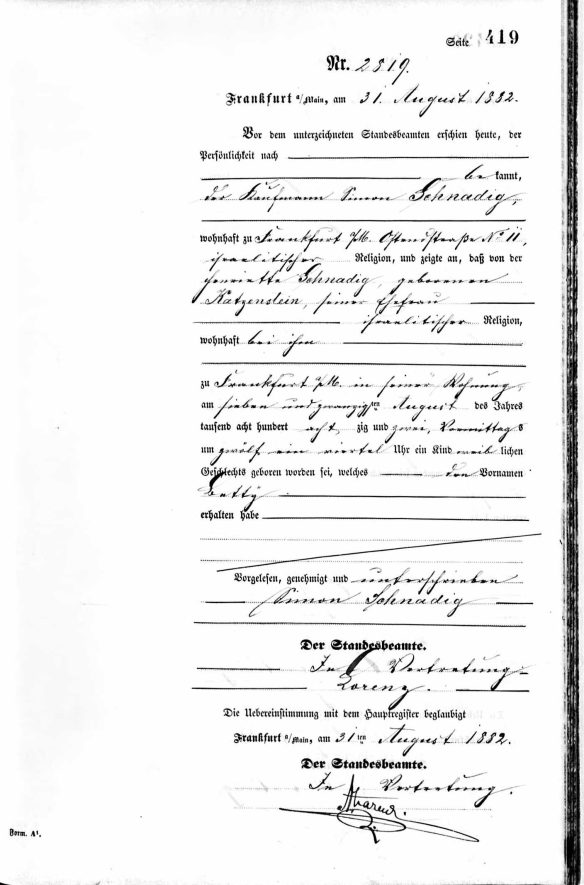 Henriette and Simon’s third daughter Elsa was born in Frankfurt on January 14, 1890, seven and a half years after Betty, making me wonder whether Henriette and Simon had other babies or pregnancies that did not survive.

The oldest daughter Helene Schnadig married Emil Cohn on May 28, 1900, in Frankfurt. She was only eighteen, and Emil was thirty. He was born in Hamburg on February 4, 1870, to Simon Cohn and Malvine Josaphat.

Helene and Emil had four children, all born in Hamburg. Meta was born on April 3, 1901.

Betty Schnadig, the middle sister, married Bernard Arie Cohen on April 21, 1903, in Darmstadt, where Betty’s parents Henriette and Simon Schnadig were living at that time. He was born January 5, 1879, in Groningen, Holland, and was the son of Arie Cohen and Amalia Breslour. Since Groningen, located in the very northernmost part of the Netherlands, is over 300 miles from Darmstadt and in an entirely different country, I wonder how Betty and Bernard connected.

Elsa Schnadig, the youngest child of Henriette Katzenstein and Simon Schnadig, also married a Dutch man. She married Salomon Aron Cats, the son of Aron Salomon Cats and Louisa Frieser; he was born on June 3, 1882, in Rotterdam, in the Netherlands. Elsa and Salomon were married on August 9, 1909, in Offenbach am Main, where her parents were then living.

So between 1900 when their oldest daughter Helene was married in Frankfurt and 1909 when Elsa was married, Simon and Helene had moved from Frankfurt to Darmstadt to Offenbach. I wonder why since in those days people seemed to stay in one place for many years if not their entire lives.

Elsa and Salomon had two sons. Marcel was born on February 25, 1916, in Schaerbeek, Belgium, and Harry was born August 20, 1919, in Amsterdam, where the family was then living as seen on this family register from the Amsterdam archives. 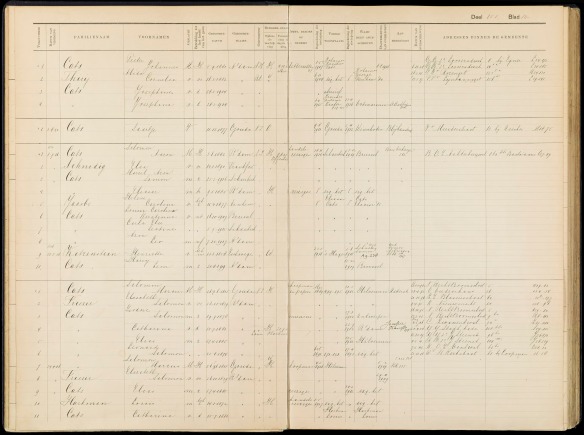 I want to express my deep gratitude to Bert de Jong of the Tracing the Tribe group on Facebook for his generous efforts in finding this Dutch record and many other Dutch records for the family of Salomon Cats and Elsa Schnadig. I would never have known of these records without his help.

If you look closely at the above record (click to zoom in), you will see that Elsa’s mother Henriette was also living with Elsa and her family in Amsterdam for some time. The record depicted below is from a registry of foreign residents and shows more specifically when Henriette spent time in Amsterdam. It appears that she was there for a period in 1917-1919 and then returned to Germany in June 1919. There is no mention of Simon so it appears he was not with her while she was living in Amsterdam.

Thus, two of Simon and Henriette’s children, Betty and Elsa, married Dutch men and relocated from Germany to the Netherlands long before the Nazi era.

Simon Schnadig died on May 7, 1920, at the age of seventy in Brussels, Belgium.8 I don’t know whether Simon and Henriette had moved once again, this time to Brussels, or whether he just happened to die there while traveling either to visit one of his daughters in Holland or on business. If Simon had relocated to Brussels, Henriette must have moved back to Hamburg either before or after Simon died because she was living in Hamburg when she died on May 27, 1924, at the age of 66. Her son-in-law Emil Cohn was the informant on her death record.

Simon Schnadig and Henriette Katzenstein were survived by their three daughters and ten grandchildren. Unfortunately, those descendants faced tragic times ahead during the Nazi era, as we will see in the posts to follow.