We saw in the last post that Henriette Katzenstein Schnadig’s youngest child Elsa survived the Holocaust as did her husband Salomon Cats and their two sons. Elsa’s two older sisters Helene and Betty were not as fortunate.

Elsa’s sister Helene Schnadig and her husband Emil Cohn were both murdered by the Nazis. According to their residency registration cards at the Amsterdam archives, Helene and Emil moved from Hamburg to Hilversum in the Netherlands on January 2, 1939, and then to Rotterdam on September 11, 1939, ten days after the start of World War II. They then returned to Hilversum on November 9, 1940. Eventually they returned to Amsterdam on July 17, 1942.

Miraculously, however, Helene and Emil Cohn’s four children all survived, although my information about them is somewhat limited. Meta, their oldest child, was married to Salomon Pregers, who was born in Rotterdam on October 8, 1885, son of Salomon Pregers and Isabelle Therese de Groot.1 Meta and Salomon were married in Hamburg on May 14, 1926, according to their Amsterdam residency card.

That residency card indicates that Salomon and Meta came from Hamburg to Hilversum on June 3, 1926, a few weeks after their wedding. They remained in the Netherlands, eventually moving to Amsterdam in February 1943, not long after Meta’s parents were taken to Westerbork.

Salomon and Meta were registered with the Judenrat in Amsterdam, as reflected on these three cards. It appears that Salomon had been a teacher at a Jewish school. I can’t decipher much more than that. 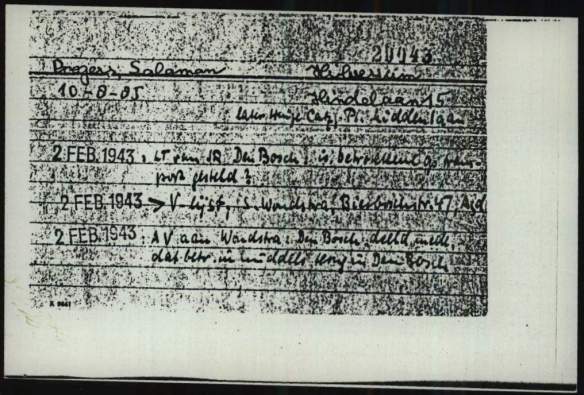 UPDATE: Bert de Jong pointed out that both these cards have the designation “gesperrt,” meaning that Meta and Salomon had been marked as exempt from deportation by the Judenrat, Salomon because of his former occupation as a teacher and his education, and Meta based on her husband’s exemption.

UPDATE from Rob Ruijs: Rob examined these three cards very carefully and provided some analysis. One interesting observation he made about Salomon Pregers was that he may have grown up in poverty and achieved success through higher education.  Rob also deciphered much of that third card with three entries for February 2, 1943. It appears that Salomon (and presumably Meta) were moving between Amsterdam and the town of Den Bosch, which is about an hour south of Amsterdam or that there was some confusion about where they were living.

The Amsterdam residency cards above indicate that both Meta and Salomon left for Germany (Duitschland) in March 1945. I would think that means they were deported then since I cannot imagine that any Jew would have gone to Germany willingly in March, 1945, but I have no record of any deportation, and I know that they survived the war.  Meta was listed as a person searching for relatives in an article in the June 15, 1945, issue of Aufbau. The words at the top translate as:

“The following list which we have received from the ITA [the International Tracing Agency] only reveals a part of the Jews found in Holland after the final liberation who are looking for relatives. In cases in which a closer address of the searcher is not given, they can be reached through the Red Cross.” 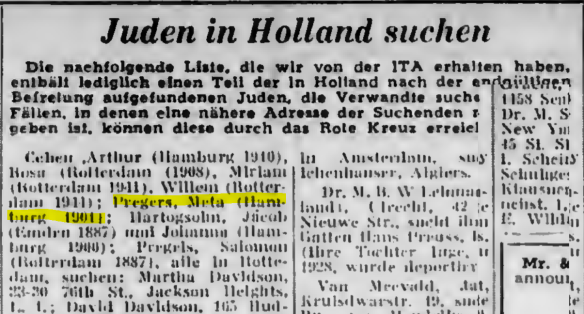 UPDATE: Thanks to Rob Ruijs for alerting me to the fact that there were death notices for Meta and Salomon that I could find on Delpher.nl. Given that neither death notice mentioned children, it appears that they did not have any. 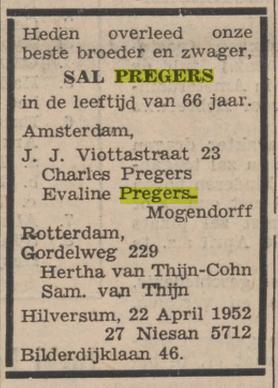 Meta’s younger brother Siegbert immigrated to Brazil in 1939; he arrived with his four-year-old daughter Ursula. I could not locate a woman traveling with him who might have been his wife, nor I have I yet found any further records for Siegbert or Ursula.

The third child of Helene and Emil Cohn, their daughter Hertha Johanna, married James Horwitz, a kosher butcher, on February 21, 1928, in Hamburg. James was born on November 10, 1895, in Hamburg, the son of Hermann Horwitz and Johanna Tannenberg.4 James and Hertha immigrated to Rotterdam inthe Netherlands from Berlin on March 15, 1939, and to Amsterdam in March of 1940.

As for James’ fate, the records conflict. Some say he was killed at the death camp in Mauthausen in Austria on April 6, 1945.5 One nephew filed a Page of Testimony saying he was shot near Berlin in March 1945 as the camp inmates were being marched out of Auschwitz.  In either event, James Horwitz was murdered by the Nazis in the spring of 1945 right before the war ended.

In 1957, Hertha was living in Rotterdam when she traveled to Brazil, presumably to visit her brother Siegbert. She listed her marital status as “casada” or married, and the surname Van Thijn was added to her name, so Hertha must have remarried after the war. That is the only information I’ve found about her at this point.

UPDATE: Thank you to Rob Ruijs for reminding me to check Delpher.nl where I found a death notice for Salomon van Thijn published by H. J. van Thijn-Cohen, obviously Hertha. The death notice reads in part, “With sadness I announce the passing of my beloved caring husband Salomon van Thijn in his 87th year, March 18, 1982.” This death notice does not mention children or refer to Salomon as a father so I assume they, like Meta and Salomon Pregers, did not have children. 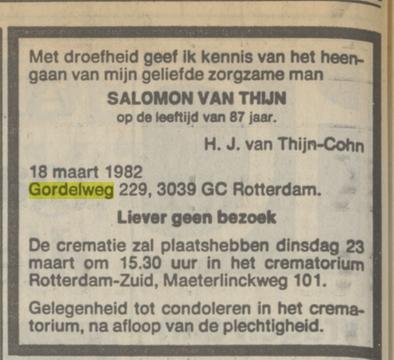 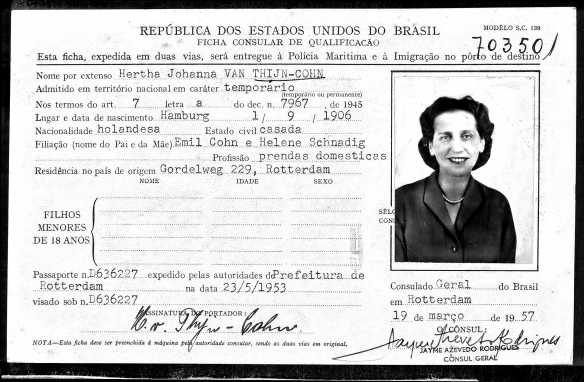 Lissy Sitta Cohn, the fourth and youngest of the Cohn siblings, ended up in England during the war. In 1939 she was living in Birmingham, working as a domestic servant.

She may have returned to Germany after the war because in 1946 she immigrated to Brazil and listed her last residence as Hamburg and her nationality as Alema or German. However, her passport was issued from London. She indicated that her intention was to stay in Brazil permanently and that she was a nurse (enfermeira). As with her siblings, I have no further details about Lissy’s life.

Thus, although the Nazis murdered Helene Schnadig and Emil Cohn, they did not murder any of their four children. But the stories of those four children are not entirely complete. I do not know whether there are living descendants of Helene and Emil, so there is still much work to be done.

35 thoughts on “Tragedy and Escape: The Story of Helene Schnadig Cohn and Her Children”