Sarah Brod Goldfarb, my great-grandmother’s sister, was widowed on October 4, 1926, when her husband Samuel died. She was sixty years old. The 1930 census shows her living at 526 William Street in Brooklyn, her long-time home, with her two youngest children, Leo and Rose. Leo was now 28 and working as a real estate salesman. Rose was 24 and not employed outside the home.1

Thank you to my cousin Alyce for sharing this photograph of Sarah with her son Leo. I love the shadow of Leo, pipe and all, that appears behind them: 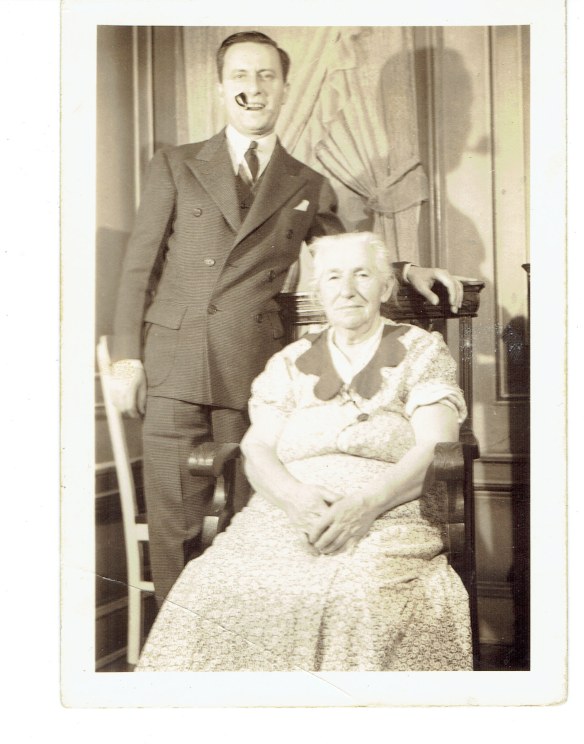 Living just down the street at 542 Williams Street was Sarah’s son Morris Goldfarb with his wife Anna and their two sons, Martin (10) and Irvin (8). Morris owned a grocery store.2 Not long after the 1930 census was enumerated, Morris and Annie had a third son Saul, born June 10, 1930, in New York.3

Sarah’s three other surviving children were all married and living with their children in Jersey City, New Jersey, where their families also continued to grow. Julius and Ida had their four daughters. Bessie and her husband Meyer Malzberg had had another child, their fourth son, Saul, born on January 23, 1928, in Jersey City. Joseph Goldfarb and his wife Betty had their third child, Selma, born January 13, 1928, ten days before her first cousin Saul Malzberg.

I have two more photographs from Alyce of Sarah with her family that appear to have been taken the same day and location as the photo of Sarah with Leo above. My cousin Steve believes that the first one shows his grandmother Bessie with her husband Meyer Malzberg standing behind her and her mother Sarah.

I am particularly intrigued by the photograph that appears on the piece of furniture behind Bessie. Is that her wedding photograph? A graduation photograph? Too small to say. 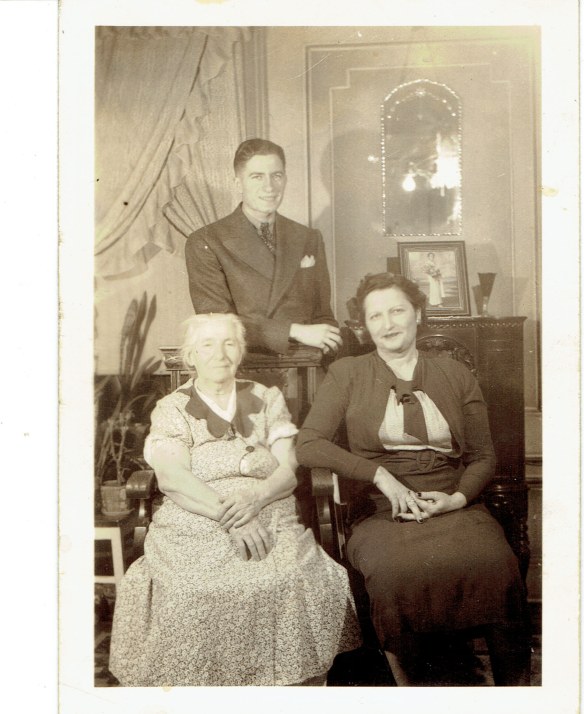 The next one is of two of the Malzberg grandsons although we are still not sure which of the four are in the photograph. 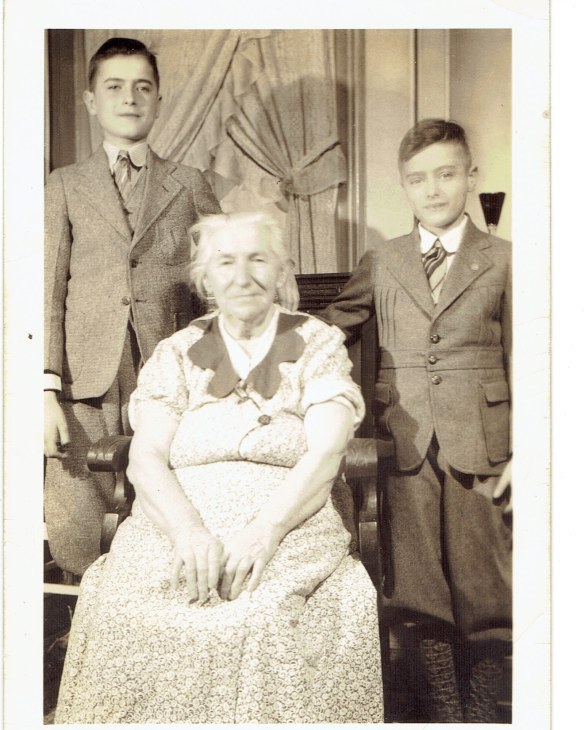 If I had some way of dating the photograph, it would be easier to identify the two boys. Norman was born in 1915, Gustave in 1919, Burton in 1923, and Saul in 1928. To my grandmotherly eye, the two boys look around seven and eleven, but each could be a year or two older or younger than that guess. Sam Goldfarb is not in the photograph, meaning it was probably taken after his death in 1926.

So if the photograph was taken in the late 1920s, it would have to be Norman and Gustave. But if it was taken in the mid 1930s, it’s Burton and Saul. I believe it’s the latter. First, Steve did not see his father Gustave in the photograph. Second, something about Bessie’s dress makes me thing this is the 1930s, not the 1920s—the tight belted waist on her dress seems unlike the dropped waist dresses worn in the 1920s. But I am far from a fashion expert, so I’d love others’ opinions.

By 1930, Sarah had fourteen grandchildren. Three more would come, but after Sarah died on July 2, 1937, at the age of 71. Sarah died from hypertensive heart disease with hypertension and diabetes as contributing causes. 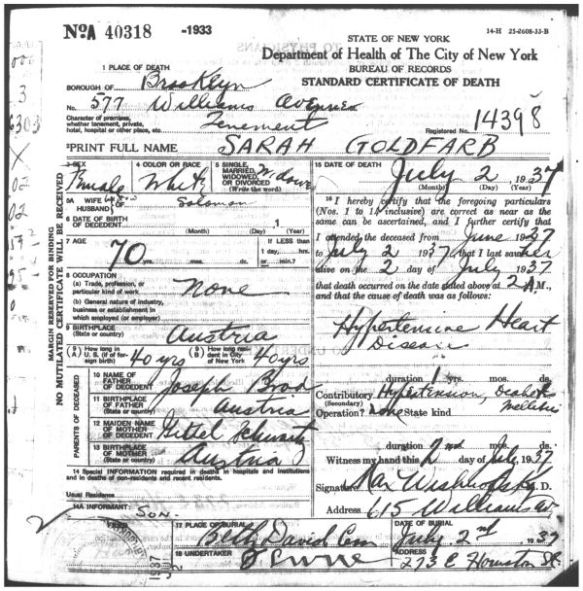 Sarah had outlived her older sister, my great-grandmother Bessie Brod Brotman, by three years, as Bessie had died in 1934 at the age of 77. Like my great-grandmother Bessie, Sarah had stayed behind in Galicia when her husband went off to America. Sarah had four young children at the time, and in 1896, she had traveled with those children alone to meet Sam in America. After immigrating, she had three more children. She raised those seven children first in Galicia, then in Pittsgrove, New Jersey, and then by 1902 in the Lower East Side of New York, living right across the street from her sister Bessie.

I like to imagine the two sisters whose lives had so many parallels raising their six American-born youngest children together. Bessie’s American-born children were my grandmother Gussie, born in 1895, Frieda in 1897, and Sam in 1900. They were close in age to Sarah’s American-born children Joe, born in 1897, Leo in 1899, and Rose in 1902. The six first cousins, living across the street from each other for at least their earliest years, must have played together and been close to each other even after Sarah and Sam moved a mile away from 84 Ridge Street to 321 Avenue C by 1910.

One piece of evidence I have of that cousin connection is the amazing photograph that Alyce shared of my grandmother Gussie with her two cousins Joe and Rose. In this more clear version of that photograph I can see my grandmother’s arm affectionately draped around Rose’s shoulder: 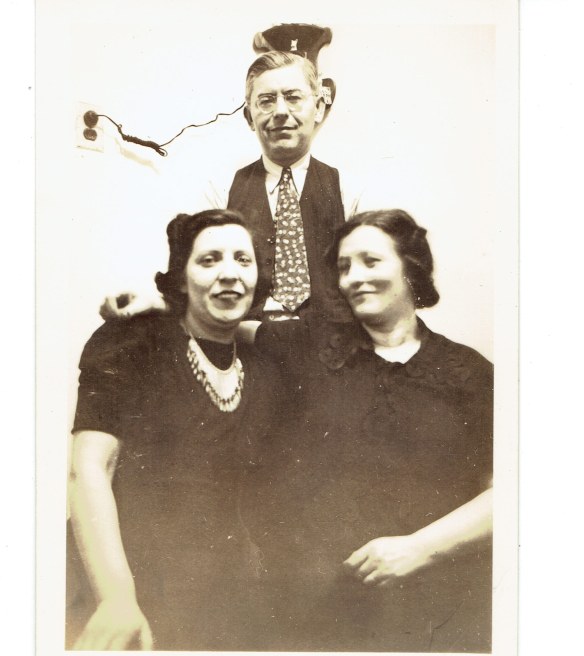 Sarah Brod Goldfarb outlived her husband Samuel and her daughter Gussie. But she was survived by her other six children and ultimately by seventeen grandchildren. The choice she and Sam made to leave Europe when they did still has rippling effects down the generations to their many descendants, including my cousins Sue, Alyce, Rebecca, Ann, Melissa, Steve, and many others. 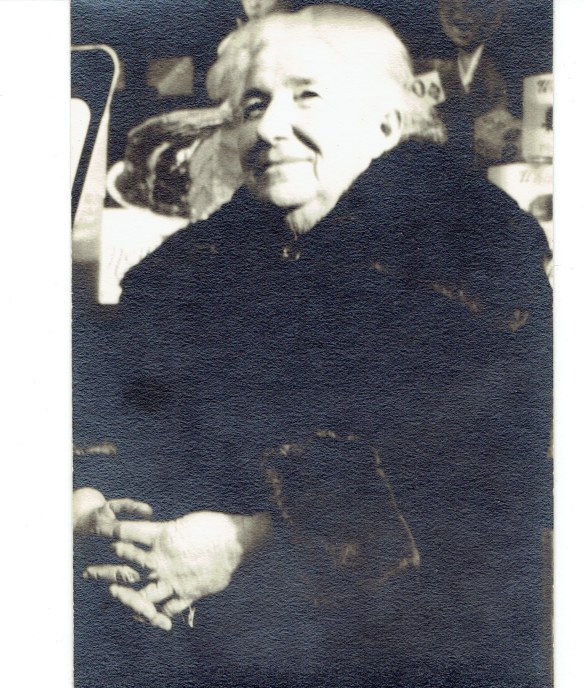 Now I will return to the stories of each of the six children who survived Sam and Sarah and tell their stories more completely.

18 thoughts on “Sarah Brod Goldfarb, My Great-grandmother’s Sister: From Immigrant to American Grandmother”