In 1937, Sarah Brod Goldfarb died, leaving behind her six surviving children, my grandmother’s first cousins: Julius, Morris, Bessie, Joe, Leo, and Rose. Now I want to go back and focus on each of them and their lives as adults.

I will start with Sam and Sarah Goldfarb’s first born child, Julius. We’ve seen that he married Ida Hecht in 1913 and that they settled in Jersey City, New Jersey, where they had four daughters, Sylvia, Gertrude, Ethel, and Evelyn. Those four daughters were related to me both through Ida, my great-aunt Taube Brotman Hecht’s daughter, and through Julius, my great-great-aunt Sarah Brod Goldfarb’s son. We also know that when he registered for the draft in 1917, Julius was a saloon keeper in his own business. 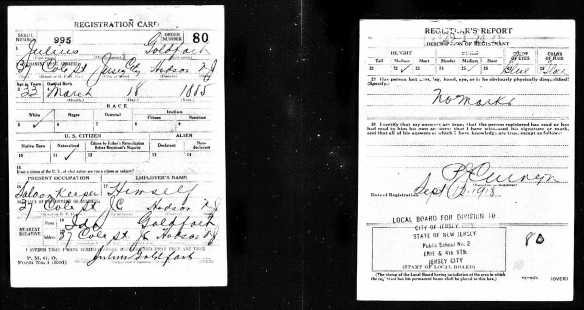 In 1920, Julius Goldfarb was living in Jersey City and still working in the liquor business, according to the 1920 US census.1 But the times were changing, and soon Julius would face the restrictions of Prohibition. Some of the consequences of Prohibition are illustrated in this article involving Julius’ saloon: 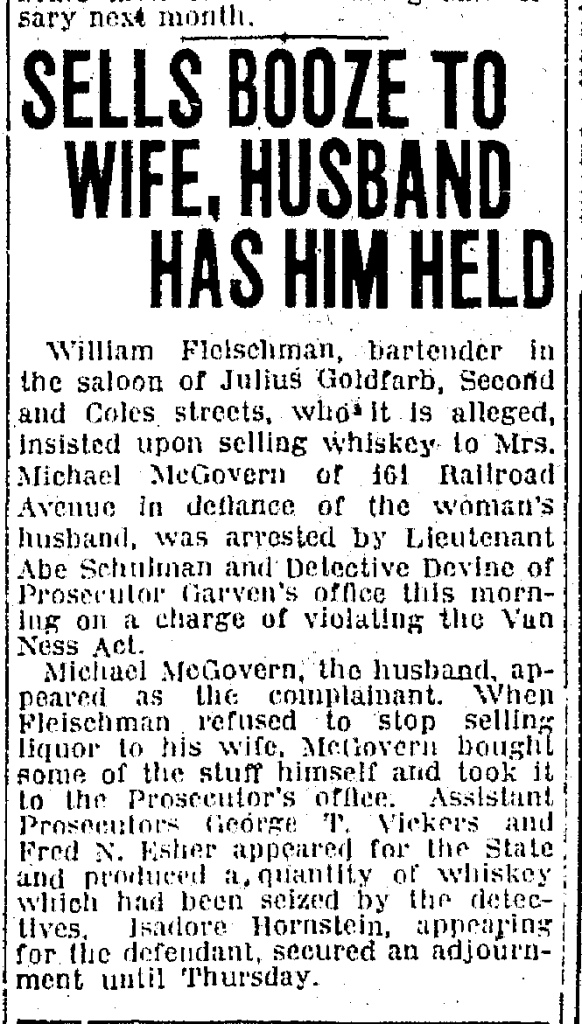 The headline of the article seemed to suggest that a woman could not buy herself a drink at a bar if her husband did not allow it, and the bartender could be arrested for selling it to her. But the crime was not that specific; it was for selling alcohol to anyone because as of January 17, 1920, liquor sales were prohibited everywhere in the US by virtue of the 18th Amendment and the Volstead Act. In fact, it’s remarkable that Julius even admitted to being in the liquor business on the 1920 census.

The article refers to the Van Ness Act, a New Jersey law enacted in 1921 and named for Jennie Van Ness, an ardent prohibitionist, New Jersey legislator, and women’s suffrage activist. The law was not targeted specifically against sales to women, however; it was a general prohibition law penalizing the sale of alcohol modeled after and intended to reinforce the federal Volstead Act. Van Ness’ sponsorship of that law cost her the next legislative election because so many in New Jersey were opposed to Prohibition.

But how did Julius even have a saloon in November 1921 if sales of liquor were illegal because of Prohibition? Julius still listed his occupation as “sal,” presumably saloon, on the 1922 Jersey City directory, so obviously he wasn’t hiding anything. It seems many bars and “speakeasies” continued to exist in the area. Perhaps at least for some time the police looked the other way.

Julius, however, soon transitioned to the real estate business. This article from the October 9, 1924, Jersey Journal discusses a legal issue regarding the assignment of options, an issue outside of the scope of this blog but one relevant to my former career. But what is of genealogical interest are the facts that raised the issue:

According to the article, Julius and Ida Goldfarb had entered into a contract with Alfred Strohmeier in which they agreed to sell him a piece of property and also granted him an option to buy an adjoining piece of property. Strohmeier assigned the contract—including the option—to Edward Ornstein, and the Goldfarbs refused to grant Ornstein that option, arguing that an assignment of an option is not enforceable. I don’t know how this specific case was resolved, but under general principles of contract law, an option is considered assignable unless the contract itself provides otherwise.

The 1930 census confirmed that Julius was now in the real estate business as he listed his occupation as “Proprietor, Real Estate.” Interestingly, however, Julius was renting the home where he lived at 701 Hudson Boulevard in Jersey City in 1930, according to the census. Although the census doesn’t reflect it, Ida was also very involved in the real estate business; acording to her granddaughter Sue, she enjoyed the buying and selling of homes. Sylvia (15), Gertrude (13), and Ethel (7) were all in school, and Evelyn (5) was at home. 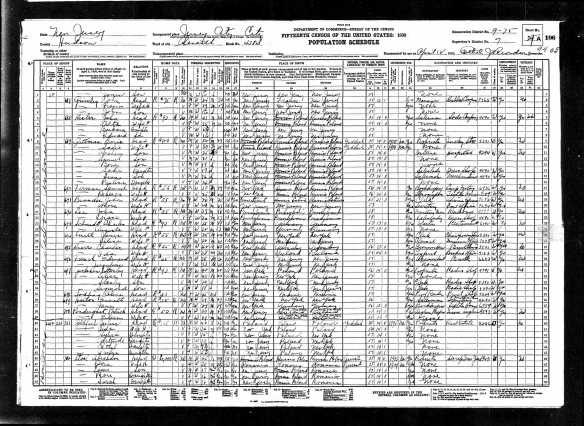 By 1934, the Goldfarb family had moved to 24 Clendenny Avenue in Jersey City. Although I couldn’t find the exact house number on Google maps, this was a street of mostly private homes, and Julius now owned his home, the home the family would live in for many years to come. He also owned a building at 115 Fairview Street where he was the landlord and was sued by a tenant who was injured by falling in the lobby: 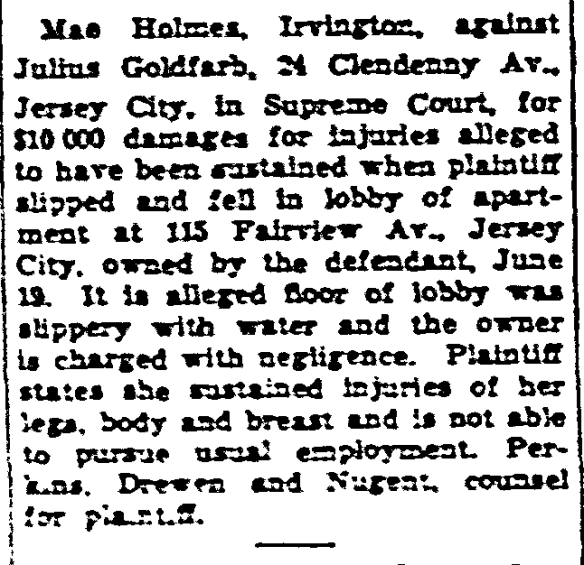 Google Maps has this image of that apartment building. It certainly suggests that Julius was doing well investing in real estate, a fact confirmed by his granddaughter Sue:

Meanwhile, the daughters of Julius and Ida were growing up. Sylvia was engaged to Louis Leyner in 1935 and married him later that year. Louis was born on December 25, 1912, in Bayonne, New Jersey, to Isaac Lehner and Anna Pearlman. He graduated in 1931 from New York University with a degree in industrial engineering.2 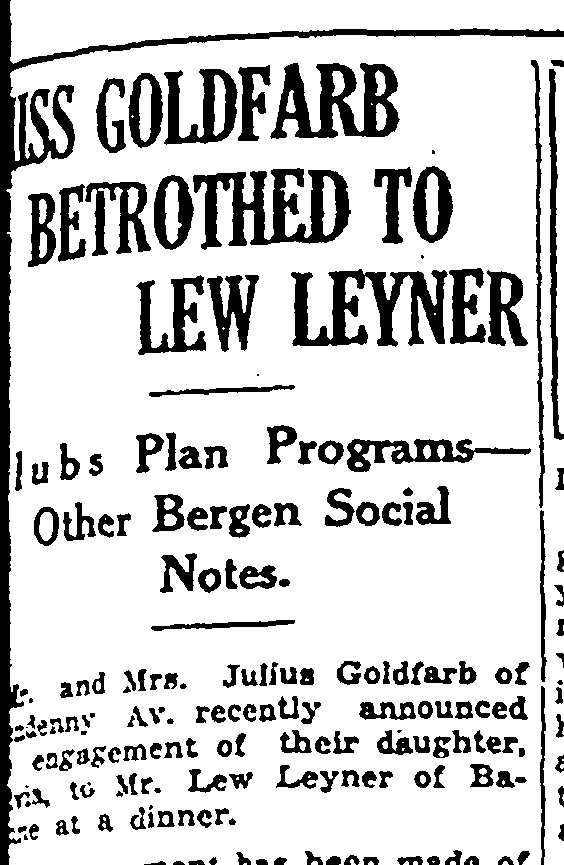 Julius and Ida became grandparents a few years later when my cousin Sue was born in Jersey City.

Here is a photograph of Ida Hecht Goldfarb with her granddaughter Sue: 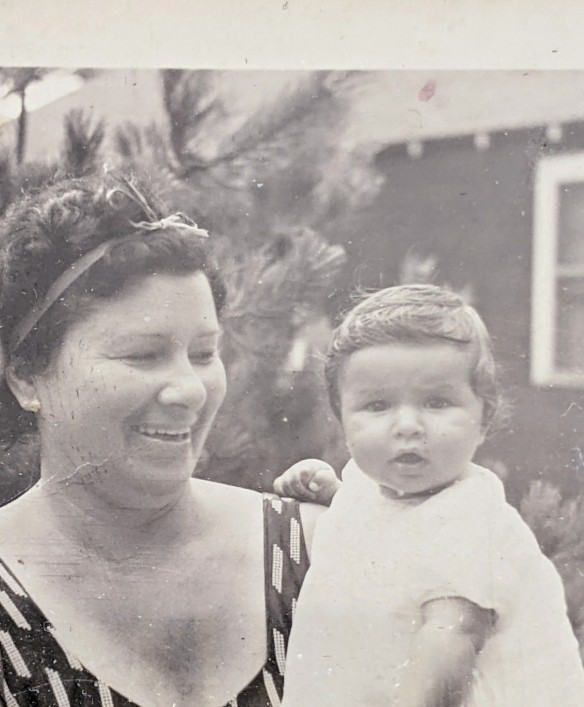 In 1938 Sylvia’s younger sister Gertrude married Benjamin Levy.3 They settled in Jersey City and were living there in 1940. Benjamin was working as a salesman.4 They would later have three children born in Jersey City.

By this time, Prohibition was long over, and Julius had returned to the liquor business. Ida worked for sometime with him in the store just as she worked with him in the real estate business; Sue described Ida as “ahead of her times” and as a very cultured and sophisticated woman even though she’d had to leave school after eighth grade to support her family. Sue said Ida had “exquisite taste in music, decor, clothing and jewelry, china, silver and fur and she designed her own hats.  She could recite the entire poem Evangeline from memory, took me to my first opera, and gave me a Saturday matinee subscription to the Metropolitan Opera as a high school graduation gift.”5

In 1939,  Julius experienced the first in a long series of very frightening robberies at his store on the Boulevard in Jersey City.

I was surprised to see that there is still a liquor store named Stuyvesant Liquor at that location in Jersey City:

Julius’ granddaughter Sue told me that Julius owned that entire strip of stores at one time and was quite successful with his real estate investments as well as his liquor business.

In 1940, Julius and Ida still had their two younger daughters Ethel and Evelyn living at home as well as Sylvia. Although still listed as married, Sylvia and Louis Leyner were living separately on the 1940 census, Sylvia with her parents, and Louis elsewhere in northern New Jersey. They would soon thereafter divorce. 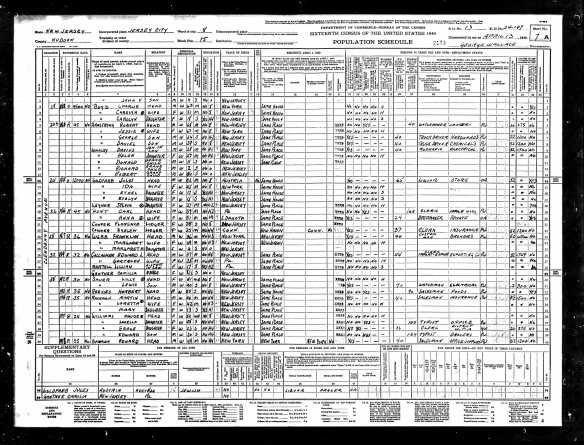 Julius continued to be in the liquor business in 1940, and as we will see in the next post, that business continued to be a target for crime in the 1940s and 1950s. But, more importantly, as remembered by their granddaughter Sue, Julius and Ida lived a good life and created a warm and loving home for their four daughters.