After such great success crowd-sourcing the identification of the people at one Goldfarb celebration, I decided to try again with another large group photograph shared with me by my cousin Debi. Together the cousins were able to identify almost everyone in this photo with a few exceptions. Maybe someone out there can help with the few mystery people.

After creating a numbered version of this photograph and circulating it to all the cousins and getting their input, I was able to create a guide naming all but three of the 25 people squeezed around that table.

No one could identify Numbers 13 and 14. I had one theory about them, but it doesn’t look like that theory holds up. Let me explain.

In my own amateurish way, I tried to date this photograph based on the clothes and hairstyles and also the apparent ages of some of the identified people in the photograph. I believe the photograph was taken sometime in the mid to late 1960s but no later than 1975.

Of those identified in the photograph, Leo Goldfarb was the oldest. He died in 1975, so we know the photograph was taken before then. Ted Goldfarb married Barbara Karp in 1964; although I cannot see her hand clearly enough to know if she’s wearing a wedding band, if we assume they were married or at least engaged, this photograph probably is no earlier than 1963.

Then the clothing. Those plaid pants worn by Saul Malzberg stood out as a 1960s style. I also had other photographs from Debi that appear to have been taken at the same event. Notice Marvin and Leo are wearing plaid jackets.

The sign over this photo reveals that this was an anniversary part as you can see the A after Happy. 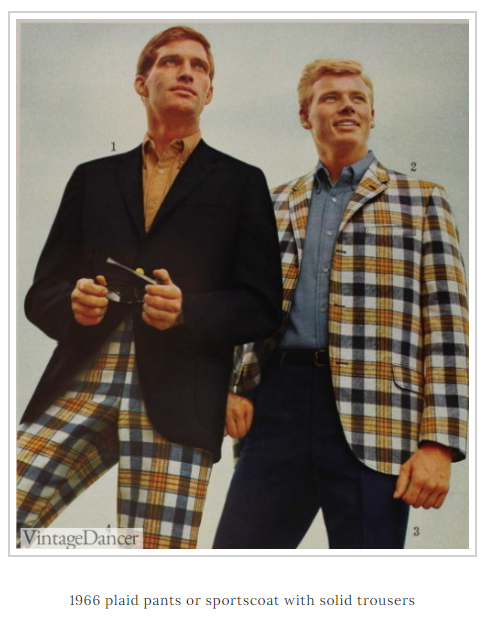 Morton’s aviator glasses seem more 1970s than 1960s, so that confused me about the dating of the photo.

I also noticed that some of the younger men at the party—Marvin and Morty in the photos above, for example—had longer sideburns. According to this article about hairstyles in the 1960s, “In the late 1950s and early 1960s, sideburns did not extend far past the ear and they were kept neatly trimmed. By the middle of the 1960s, British bands brought long sideburn styles back into the mainstream.”

Wikipedia said this about sideburns: “Sideburns later gained popularity in the counterculture of the 1960s: the struggle of a New Jersey youth to wear sideburns to his public high school graduation made a newspaper article in 1967.[citation omitted] Sideburns were associated with young mods and hippies, but in the ’70s became prevalent in all walks of life.”

I also think the women’s hairstyles date the photo in the mid to late 1960s. The younger women tend to have short hair worn simply like Florence Glasser Goldfarb and Anita Spector Malzberg or even quite naturally curly like Barbara Weinberg Malzberg and Toby Diller Malzberg—not the bouffanty style of Jacqueline Onassis of the early 1960s or the shag haircuts of the 1970s.

So I am assuming the photograph was taken sometime between 1964 and 1975 based on the clothing and hairstyles and the people present.

I also considered who was not identified in the photograph although not much can be determined by their absence since there could have been any number of reasons they might not be in the photograph.

None of Morris Goldfarb’s sons are listed, but they all lived far from New York by those years. Joe Goldfarb died in 1962; his son Marvin is present, but not his daughters Selma and Francine or their husbands or Joe’s widow Betty.

My theory was that Numbers 13 and 14 were Meyer and Bessie Malzberg. I even had a theory that this was a party to celebrate their 50th anniversary in 1964. They were married on August 9, 1914. I thought I saw similarities between Number 14 and three photos of Bessie. But the photos are blurry when I zoom in, and I know that I often just see what I want to see. Also, in the last photo taken in 1960, Bessie appears to be much taller and Meyer does not look like Number 13.

Two of Bessie and Meyer’s grandsons did not think that couple were their grandparents. They would know best. And if the party took place after 1966, as some of the styles suggest, then Meyer wouldn’t have been there.

So for now three people in the photograph are not identified. Maybe someone will show up at some point and complete the picture. A few of those pictured are still living so perhaps they will recall who was there and what the occasion was.

Thank you once again to all my wonderful Goldfarb cousins! I hope we can meet in person someday soon.