In 1882, Dora Blumenfeld Loewenstein and six of her children arrived from Germany and settled with her husband Meyer Loewenstein in Bloomington, Illinois, where they had two more children, completing their family. But why Bloomington? What brought them there? It was not near any major city—about 140 miles from Chicago, 170 from Indianapolis. But between 1850, when there were only about 1500 people living there, and 1880, when there were about 17,000 people, it had experienced a huge population explosion. Its rich farm land attracted settlers, and it grew to be a center for trade in central Illinois. Even Abraham Lincoln was known for traveling there from his home in Springfield, Illinois, seventy miles away.

But why did Meyer choose Bloomington? A February 10,1927, article (pp. 3, 5) from The Pantagraph, the Bloomington newspaper, provided the background to answer that question. 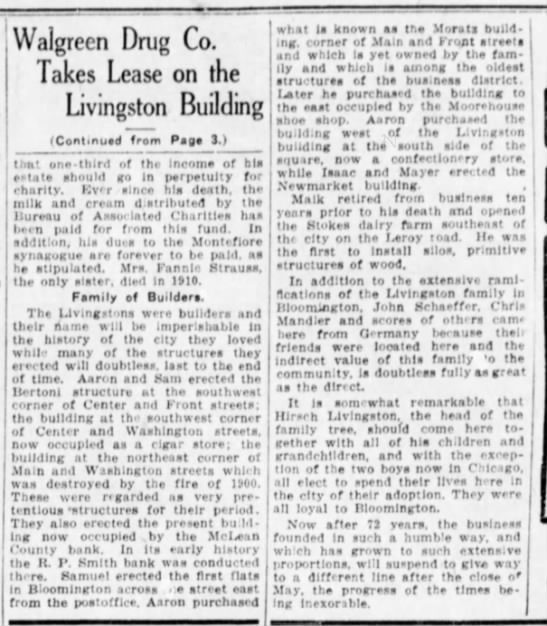 I will excerpt from and summarize some of the pertinent parts of this long article. Note that Meyer is spelled “Mayer” in this article as it sometimes was on other records as well.

Probably no other family in Bloomington has played such a prominent part in the mercantile history of the community as the Livingston. No other has produced so many buildings or taken such an active part in the commercial affairs of the city. Dating back to the middle ages and originating in Hessen, Germany, the father of the first representatives of the Livingston family to reach Bloomington was Hirsch, who resided at Daubriegn [sic], a suburb of Giessen in Hessen. He was the fiscal agent for a baronetcy and very prominent in that locality.

It was in the early fifties that two of his sons, Sam and Aaron, then in their teens, decided to emigrate to America to carve their fortune in the land of liberty. … They came over in a sailing vessel and the voyage required two months. …

The two lads came to Cincinnati where an uncle, Mayer Livingston [note: not Dora’s husband, but his uncle], was in business and with whom they resided until they had mastered the English language. They then started out with peddlers packs upon their backs and sold merchandise thru Ohio. Reports of a more prosperous condition in Illinois, led to their shift to this state in 1852, and they did so well with their merchandising that they were able to buy a horse and wagon with which they traveled from farm to farm. They found the farmers hospitable and the two boys accumulated a little money.

Aaron was the first to reach Bloomington, coming in 1855 and renting a little shack at the southwest corner of Main and Washington streets for a clothing store. ….

Prosperity came and a few months later, the brother Sam also laid aside the peddler’s pack and also opened a clothing store at the southwest corner of Main and Front streets…These two establishments marked the inaugural of the Livingston business in Bloomington….

On the early seventies Sam and Aaron erected the building at the northwest corner of Center and Washington streets [which a third brother, Maik, managed]. …Aaron also launched a dry goods store at the south side of the square and which he turned over to his cousins….

That was a notable event in the Livingston family when their beloved father, Hirsch, was induced to join his sons here and see the prosperity that had come to them. The old man made the long voyage in 1880, just arriving to witness the death of Aaron. Hirsch, a fine type of the old school of German families, was greatly interested in Bloomington, saw the need of a Jewish synagogue here and was the founder of the Moses Montefiore edifice which was erected in the early eighties. Hirsch passed to his forefathers in 1885, his couch surrounded by his sorrowing children and grandchildren.

When Aaron died, the remainder of the family sent for Isaac and Mayer to come over from Germany….Mayer arrived in 1881 and Isaac in 1882. [This confirmed my hunch that the Isaac Loewenstein sailing with Dora and her children was indeed her brother-in-law.] Following a conference, it was decided that Mayer should take charge of the clothing store at the corner of Main and Front streets; Isaac, the clothing store [at Main and Washington]; while Sam was to take charge of the 640-acre farm in Old Town township.

The article continues and brings the history of the Livingston family in Bloomington up to 1927, but I will stop here for now and return to the specific story of Meyer and Dora and their eight children.

The story of Hirsch Loewenstein and his sons is so typical in many ways of the German Jews who immigrated to the US in the mid-nineteenth century. Like my Katz/Katzenstein, Schoenthal, and Nusbaum families in particular, the Loewensteins/Livingstons came as young men, became peddlers traveling to far flung and rural parts of the growing country, eventually becoming successful enough to settle in one place and establish permanent stores there. Those stores grew to become department stores, leading to prosperity and security for those young immigrants and their families. It was not only my family’s story, but the story of many of the great department stores that grew all over this country in the mid to late 19th century, many of which still exist today.

19 thoughts on “German Jewish Immigrants in America in the 1800s: The Livingstons in Bloomington, Illinois, as a Classic Example”