By 1940, the five surviving children of Dusschen Blumenfeld and Isaac Strauss—Bertha, Moritz, Hermann, Meier (Max), and Rebekah—were all living in the US. Their children were also safely in the US as were their spouses (although Rebekka’s husband Albert Meyer had died in 1928). It almost seems like a miracle that not one of Dusschen’s children had been killed in the Holocaust. In this post and the next three I will continue the stories of each of those children. This post is about the oldest child, Bertha Strauss Herz and her family and about the second oldest child Moritz Strauss and his family. 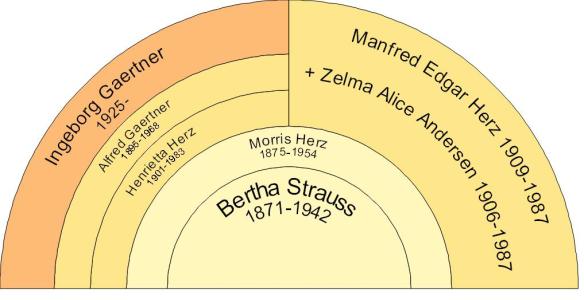 Bertha, the oldest child, was living with her husband Morris Herz and their daughter Henrietta (Henny on the 1940 census), their son-in-law Alfred Gaertner, and granddaughter Ingeborg in New York City where both Alfred and Morris were working as tailors, Alfred for a mail order house and Morris for a retail tailor shop.

Morris and Bertha’s son Manfred Edgar Herz had changed his name to Fred Edgar Herz and registered for the World War II draft under that name on October 16, 1940. At that time Fred was living in Charleston, West Virginia, and working for the Interstate Home Equipment Company. 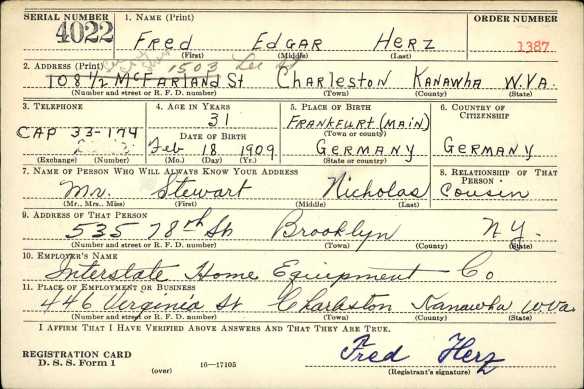 He enlisted in the US Army on June 21, 1943, and was honorably discharged on October 12, 1945.1 By that time, he had obtained a license to marry Zelma Anderson Risher, as announced in the March 22, 1945, issue of the Knoxville (Tennessee) News-Sentinel. Both Fred and Zelma were residing in Charleston, West Virginia, at that time.2 They did not have children, although Zelma had a daughter from a prior marriage.

Meanwhile, Fred’s mother Bertha, the oldest of the siblings, died at age 71 in New York on October 31, 1942.3 She was survived by her husband Morris and children Henrietta and Fred and granddaughter Ingeborg. Morris outlived Bertha by almost twelve years; he died on January 8, 1954, at the age of 78.4

Henrietta’s husband Alfred Gaertner died in December 1968,5 and she followed him fifteen years later on August 2, 1983.6 They were survived by their daughter Ingeborg and her family. Fred Herz and his wife Zelma both died in Palm Springs in 1987, she on January 20,7 and Fred on June 9, 1987.8 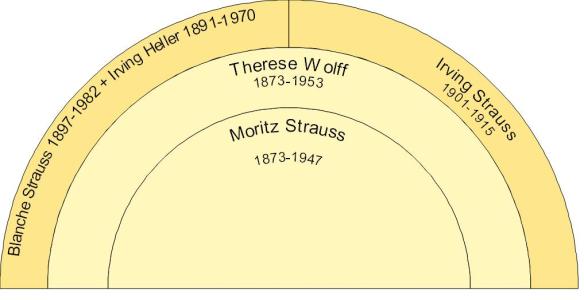 Bertha’s brother Moritz (Morris in the US) Strauss, who had been in the US since 1889 when he was a teenager, was living in the Bronx with his wife Therese in 1940. He was now retired.9

Their daughter Blanche had married between 1930 and 1940; her husband was Irving Heller, and he had lost his first wife, Frances Lippmann, on July 13, 1937.10 Although I cannot find a marriage record for Blanche and Irving, I assume they married sometime between July 13, 1937, and April 17, 1940, when the 1940 census was enumerated, as they appear together on that census as husband and wife, living in New York City with Irving’s son Lester. Irving was the owner of a wholesale egg business, and Blanche was still a teacher in the New York City public schools.

Morris Strauss died on October 20, 1947, in New York; he was 74.11 He was survived by his wife Therese and daughter Blanche.

In 1950, Therese was living with Blanche and her husband Irving Heller in New York, where Irving still had the egg business and Blanche was still teaching.

Therese died three years later at the age of 80 on October 22, 1953.12 Irving Heller died on February 19, 1970; he was 78.13 Blanche lived another twelve years; she died on March 15, 1982, at the age of 84.14 As Blanche had had no children of her own with Irving, there are no biological descendants of Morris and Therese, although Irving’s son from his first marriage may have been adopted by Blanche.

My next post will be about Bertha and Moritz’s next oldest sibling, Hermann Strauss, and his family’s life in the United States.

12 thoughts on “Dusschen Blumenfeld Strauss, Part III: Her Children Bertha and Moritz and Their Lives in America”