Before I move on from the Schoenthal family line, I have a few updates to write about, including some newly discovered cousins and some wonderful photos.  But first an update to one mystery.   Unfortunately an update but not a solution.

Remember the mystery of Baby Rose Schoenthal, the daughter of Jacob Schoenthal and Florence Truempy? She had appeared on the 1930 census as a fifteen month old child living with her parents in Atlantic City.

Then she disappears.  She does not appear on the 1940 census with her parents or elsewhere as far as I can tell, and there is no death record for her in either New Jersey or Pennsylvania, no obituary for her, no news articles that mention her.  Nothing at all.

Many people gave me suggestions on where else to look.  Some people thought Rose had been given up for adoption or sent to live elsewhere or institutionalized.  Others thought she was just omitted from the 1940 census and that she might have married and changed her name sometime later.  But I haven’t found any records with her birth name or her parents’ names to link her to a different name, whether she was adopted, institutionalized, or married.

Someone suggested I see if Rose was mentioned in Florence or Jacob’s will or obituary.  I wrote to the Atlantic City public library and asked them to do an obituary search.  Neither obituary mentioned a child. 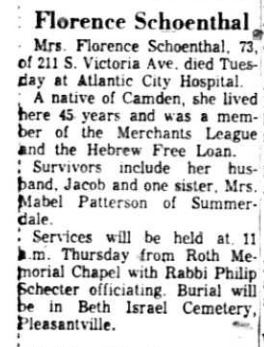 Then I searched the online land records for Atlantic County, and found a record for a May, 1976 transfer of land owned by Jacob Schoenthal.  The transfer had been handled by the executrix of Jacob’s estate, who was not his daughter Rose, but his sister, Hettie Schoenthal Stein.   That meant that Jacob had had a will. 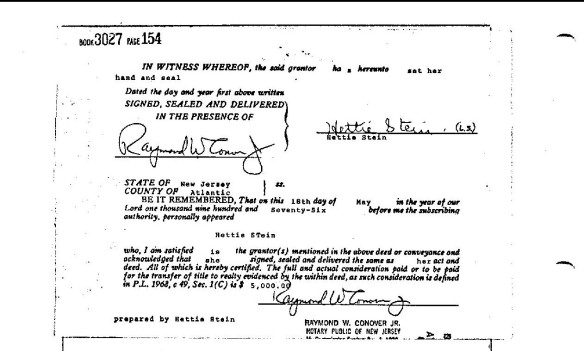 Transfer of Deed of Land Belonging to Jacob Schoenthal

I decided to request a copy of his will from the Atlantic County Surrogate’s Court.  That will, seen below though not easily read as reproduced, named the following people as his heirs at law and next of kin: his sister Hettie Schoenthal Stein, his sister Estella Schoenthal Klein, and his brother Sidney Schoenthal.  According to the will, there were no other surviving heirs or next of kin.  There was no mention of Rose or any other child.  (All of Jacob’s other siblings and his wife Florence had already died as of the time of his death in February, 1976.) 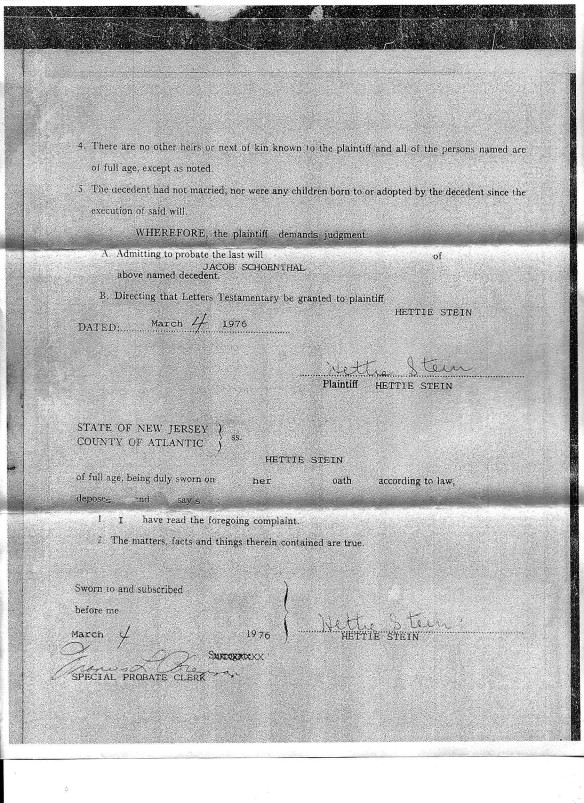 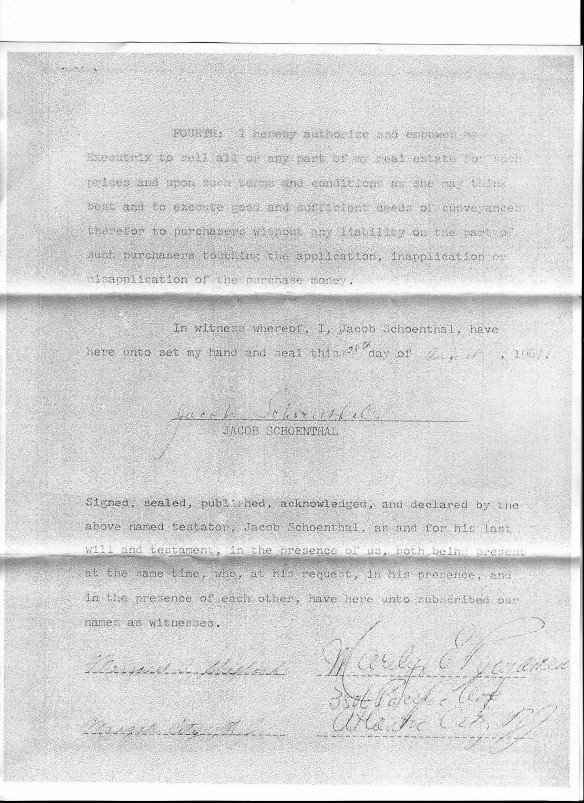 Thus, Jacob’s daughter Rose either was no longer alive at the time of his death or she had been given up for adoption and thus was no longer his legal kin.  Unfortunately, I don’t know which is the case.  Next step is to check for adoption records.  I’ve contacted the appropriate office and am waiting to see if I am even eligible to request such records.  I frankly think it’s a real long shot, and I think this will remain one of those unsolved mysteries.

But I remain open to other suggestions.

© Amy B. Cohen, 2013-2019. Unauthorized use and/or duplication of this material without express and written permission from this blog’s author and/or owner is strictly prohibited. Excerpts and links may be used, provided that full and clear credit is given to Amy B. Cohen and Brotmanblog with appropriate and specific direction to the original content.