Back in April, I posted about the dead ends I’d reached in my research of Minna Fuld and her family. To recap, Minna was the daughter of Helene Goldschmidt and Salmon Fuld,  the granddaughter of Jacob Meier Goldschmidt, and the great-granddaughter of Meyer Goldschmidt, who was my four-times great-uncle. Minna was married three times. First, she married Leo Offenstadt in 1894 when she was eighteen, and that marriage ended in divorce in 1904. She and Leo had had one child, Flora, in 1894. Then Minna married Ladislaus Polacovits in 1906, and he died in 1913; Minna had one child with Ladislaus, Liselotte, who was born in 1907. Finally, Minna married Hermann Heinrich Karl Reuss in 1923, with whom she had no children.

The first mystery was about Minna’s whereabouts during the 1930s and 1940s. I knew that her third husband Hermann was listed in the 1940 Frankfurt directory and died in Frankfurt on September 27, 1947. But several unsourced trees reported that Minna died in Tel Aviv on May 3, 1944. So had Minna gone to Palestine alone and died there? Had Hermann gone with her and returned to Germany after the war?

The second mystery was the fate of Minna’s daughter Flora Offenstadt during the Holocaust. Flora Offenstadt married Hermann Durlacher in 1918 and had two children with him, Siegfried Julius Thomas (known as Thomas) Durlacher and Ulla Louise Durlacher. I had records showing that Flora and the two children immigrated to Brazil in 1939, but no records for her husband Hermann or any information about what happened to them after they immigrated.

I also had no luck locating more information about Liselotte, Minna’s younger daughter with her second husband Ladislaus, although I knew she and Ladislaus were living in Palestine/Israel during the 1940s and that their son had married in England.

Having exhausted the usual genealogy tools and newspaper databases and Google, I turned to Tracing the Tribe to see if there was anyone with connections in Brazil who might be able to help me. And I was very, very fortunate that a group member named Jacqueline who is from Sao Paulo volunteered to help me.  She first located a marriage announcement for a son of Siegfried Julius Thomas Durlacher, which can be found here. 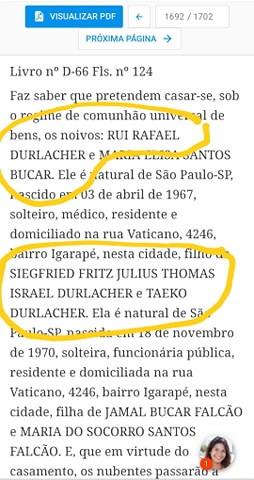 Then Jacqueline found a long magazine article, partly in German but mostly in Portuguese, that she summarized for me. According to the article, Thomas Durlacher started a library of German-language books in Atibaia, a town in the countryside outside of Sao Paulo; the library now has ten thousand books, some of which were Thomas’ parents’ books that they took with them out of Germany when they escaped from the Nazis and others were donated by other refugees from Germany. The article also mentioned that Thomas had two sons, one a doctor in Brazil and the other residing in Germany.

And then—the icing on the cake—Jacqueline located those sons and other members of the Durlacher family on Facebook! At that point, I took over and sent messages and friend requests to these descendants of Minna Fuld. And almost immediately two of Thomas Durlacher’s sons responded. They then connected me to their cousin Sergio, the son of Ulla Durlacher (Flora and Hermann’s daughter), who contacted me by email.

Sergio told me that his grandfather Hermann Durlacher was the first member of the family to immigrate to Brazil. When I asked him why Brazil, he explained that it was the destination of the first available ship that Hermann could take.  Hermann and Flora had already sent Thomas to the Netherlands to study; he lived with a wealthy family who were close friends of the family. Flora and her daughter Ulla remained in Germany, and Sergio said that his mother had very painful memories of those years.

Unfortunately, Sergio did not have any information about the fate of Minna Fuld, his great-grandmother, so that mystery remained unsolved.

He provided me with more contacts, however, and one of those contacts who was in fact on Sergio’s father’s side found this document about Minna: 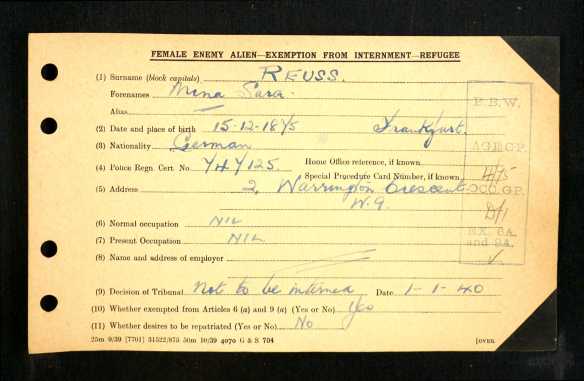 I also realized that one of the documents I’d found about Hermann indicated that Minna had immigrated to England: 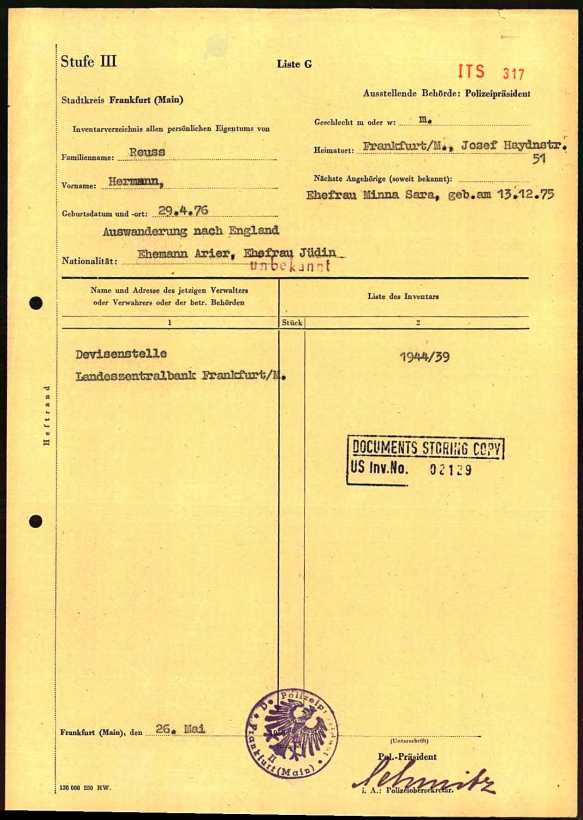 So Minna was in England in 1940. I then located her on the 1939 England and Wales Register:

Note that she reported that her marital status was married, but Hermann was not living with her in England. That might explain why he was still listed in the 1940 Frankfurt directory. Hermann was not Jewish and may have stayed behind to protect their interests in Germany.  But I could not find any later record for Minna. Since Hermann was a widower when he died in Frankfurt in 1947, Minna must have died sometime between 1940 and 1947, but where and when remains a mystery.

On the other hand, thanks to Jacqueline, I now am in touch with several of Minna’s descendants, my cousins who grew up in Brazil after their parents and grandparents escaped there from Germany in the 1930s. Someday someone will learn what happened to their ancestor Minna.