In 1940, Donald Weil, my fourth cousin, once removed, was living with his parents, Adele Sigmund and Raymond Weil, working as the assistant manager of the lamp department in a store in Cleveland.1 When his father died in 1943, Donald was a lieutenant in the US Army, stationed in England.2 There is a record on Ancestry showing that a Donald J. Weil enlisted on October 15, 1940 and served in the Army Corp of Engineers; I am certain that this is the same Donald Weil as the record indicates that he was from Cleveland and that his civil occupation had been as a purchasing agent or buyer.3

And that brings me to the mystery of Donald Weil. There are two FindAGrave memorials for Donald J. Weil with the same birth and death dates, both in Florida, but not in the same cemetery.

The first can be found here:

It shows that Donald J Weil was born on August 28, 1916, which is consistent with the birth record I have for the Donald who was the son of Raymond Weil.5 This FindAGrave memorial reports that Donald died at age 93 on April 26, 2010, in Longwood, Florida, which is where Jane Weingarten Weil was living in 1992 when she died. It also indicates that Donald was buried at Woodlawn Memorial Park, in Gotha, Florida.

Most importantly, there is a long biography written by Donald’s daughter on this FindAGrave page. It provided the best clues as to Donald’s life after World War II—that he ended up working in a large retail store in Detroit. Searching for Donald Weil in the Detroit newspapers, I learned that Donald had purchased a store in Detroit in June, 1960. In 1970 the family relocated to Florida, as noted above.

I also was able to locate a death notice for Donald J. Weil in the Orlando Sentinel of May 6, 2010, reporting that Donald had died on April 26, 2010, in Longwood, Florida.6

So what is the mystery, you ask?

Look at this FindAGrave memorial here: 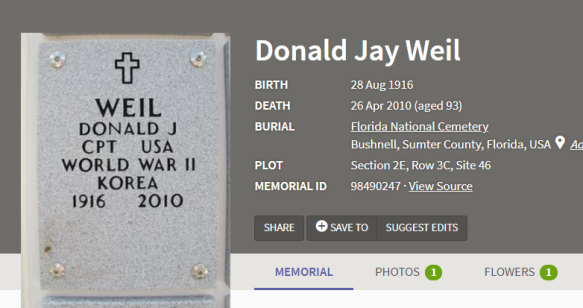 A Donald Jay Weil—with the same exact birth and death dates as “my” Donald. This one is also buried in Florida, but at Florida National Cemetery in Bushnell, Florida, which is 80 miles west of Longwood, Florida. This Donald is definitely not Jewish. There is a cross on his headstone. Remember that Jane Weil’s death notice specifically mentioned that she was Jewish. But perhaps Donald was not. I have no record indicating his religious identification.

There is only one Donald Weil in the Veteran’s Affairs, BIRL database on Ancestry who was born in 1916 and died in 2010.7 I searched on Fold3.com for any Donald Weil who served in World War II. There were a number of men with that name, but no one else born in 1916 other than my Donald Weil.

A search of Ancestry for any record of any Donald Weil born in 1916 anywhere in the US turned up one, a marriage record for a Donald G. Weil born in about 1916, son of John Weil and Margaret Kuper, who married Helen Kennedy in Cuyahoga County, Ohio, on June 24, 1952.8 But further research revealed that in fact that Donald Weil was born October 3, 1925, in Kentucky, not in August of 1916.9 So that can’t be the Donald Weil buried in the Florida National Cemetery. In fact, that Donald Weil died in 1997, not 2010.

So who is the Donald Jay Weil buried at the Florida National Cemetery? Is he my cousin Donald with just a military memorial placed at that cemetery with his body buried at the Woodlawn cemetery? Or perhaps the opposite?

I called the Florida National Cemetery, and their representative said that Donald J. Weil is definitely buried there and that perhaps his body had been moved from Woodlawn cemetery and reinterred at Florida National. So next I called Woodlawn cemetery. Their representative searched for Donald and did not find him. Thus, I believe that Donald was moved to the Florida National Cemetery sometime after his daughter created the memorial at FindAGrave and that both FindAGrave memorials are for the same man, my cousin Donald Jay Weil.