In a much earlier post, I wrote about how some of my maternal relatives met—my grandparents, my aunts and uncles, my parents, and others.  When researching my great-grandparents Emanuel and Evalyn Cohen and my grandparents John and Eva Cohen, I wondered how they had met.  Fortunately, my brother had heard the stories years ago and shared them with me.

My great-grandmother Evalyn Seligman Cohen was born in Philadelphia in 1866, but her family had moved to Santa Fe, New Mexico, before 1880 (more on that at a later time).   Evalyn (later Eva May) was probably the first woman in my family to go to college.  She came back to Philadelphia to start college at Swarthmore College and met Emanuel Cohen.  They fell in love and married in 1886, and Evalyn never finished college.  (Maybe if she had, Swarthmore would have accepted me back in 1970 when I applied there. But then again, if she had, I would never have been born.)  She was only twenty years old when they married.  If not for her ambitious and independent spirit, she might never have traveled east and met my great-grandfather.

My grandparents also only met because my grandmother Eva Schoenthal Cohen was willing to make the long trip back east.  She also was born in Pennsylvania, but her parents, Isadore and Hilda Schoenthal, had moved west to Denver, Colorado, by the time Eva was six years old.  Sometime in 1922 when she was eighteen years old (she had graduated from high school that June, so perhaps over the summer), she came east to visit with some of her family in Philadelphia.  She met my grandfather John Cohen at some social event while visiting Philadelphia, and as the family story goes, he was so smitten with her that he followed her back to Colorado to woo her and ask her to marry him.  She accepted his proposal, and they were married on January 7, 1923, when he was 27 and she was 19 years old.  As with her mother-in-law, if my grandmother had not been brave enough to travel from Denver to Philadelphia, my grandparents might never have met.

My father, the third Cohen man to fall in love quickly and marry a very young woman, also only met my mother because of her willingness to travel, although not across the country.  As I’ve recounted before, they met at Camp Log Tavern in the Poconos where my father was working as a waiter at an adult camp in the summer of 1950.  My mother, who was nineteen and living in the Bronx, came for a vacation, and my father fell in love with her at first sight.  She was less interested, so he had to track her down in the Bronx phonebook after she left.  They married in 1951 when she was twenty years old and he was twenty-four.  They will be celebrating their 63rd anniversary this September. 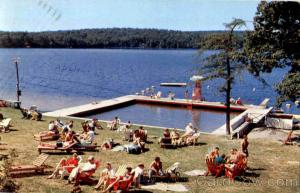 Do you see a pattern here? Not only the serendipity of how each couple met, but both my father and my grandfather had to pursue the woman they loved, my grandfather by taking a train across the country, my father by searching through phonebooks to find my mother.  Thank goodness for those impulsive and determined Cohen men and the traveling women they met and married, or my siblings and I would not be here today. 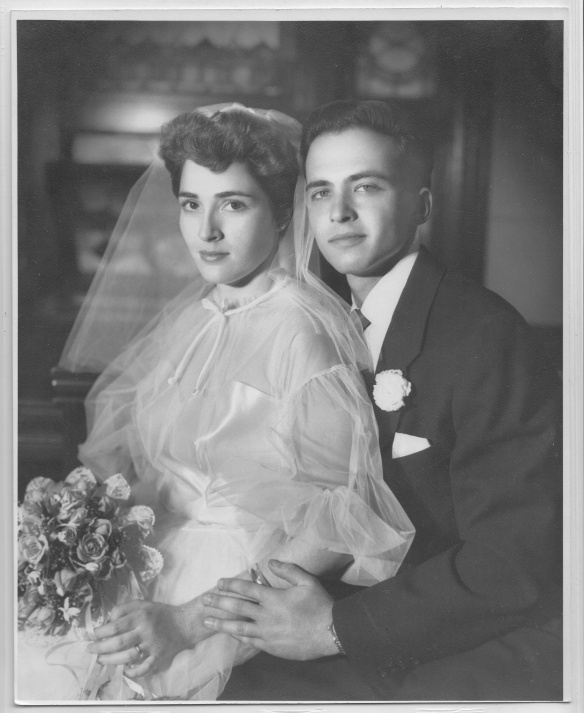