Having told as much as I’ve learned about Helene Katzenstein Werner and her descendants, I will now move on to Amalie Goldschmidt and Juda Katzenstein’s second child Fredericke, born July 13, 1855, in Eschwege. As we saw, she married Leopold Goldmann, also a native of Eschwege, in Eschwege on November 16, 1875.  They settled in Eschwege, where their three children Clementine, Karl, and Meta were born.

Clementine was born on November 9, 1876, just a week short of Fredericke and Leopold’s first anniversary. 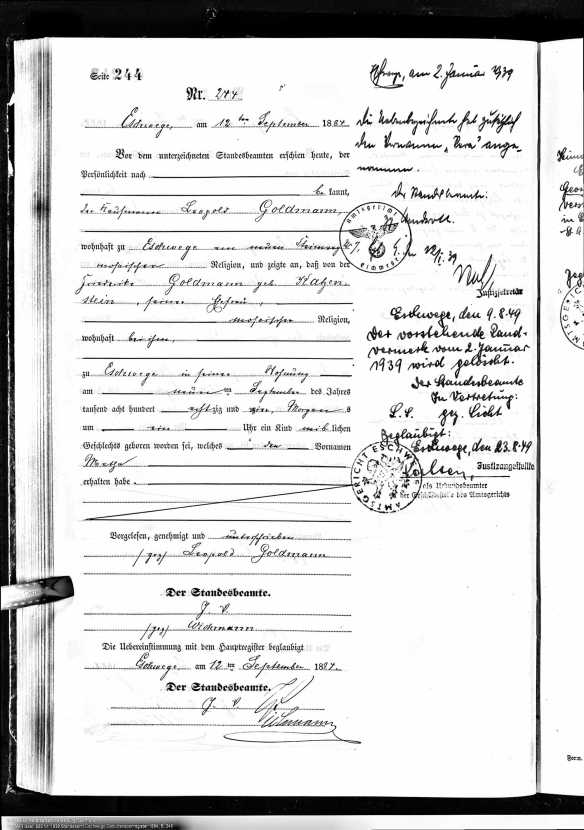 (For those who get confused by all the names, here is a family tree chart you can click on to see the relationships.)

Clementine married Alexander Joel in Eschwege on November 8, 1898, the day before her twenty-second birthday. He was born on July 20, 1871, in Hamburg, to Aron Ephraim Joel and Rika Koch.

Then, just two months after Clementine’s wedding, her father Leopold died on January 12, 1899, in Eschwege. He was fifty years old and left behind his wife Fredericke, who was 43, and their three children Clementine, Karl, and Meta. 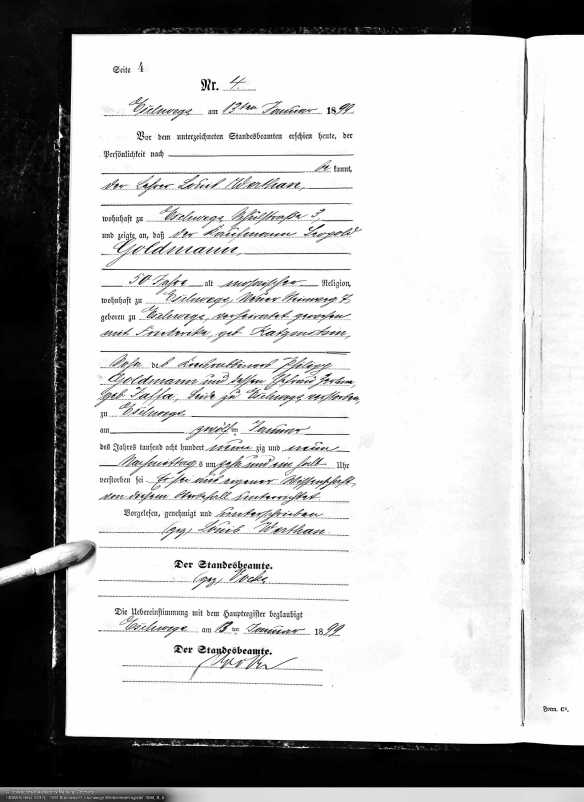 Clementine and Alexander Joel had three daughters. Esther Edda Joel was born in Hamburg on May 27, 1901. 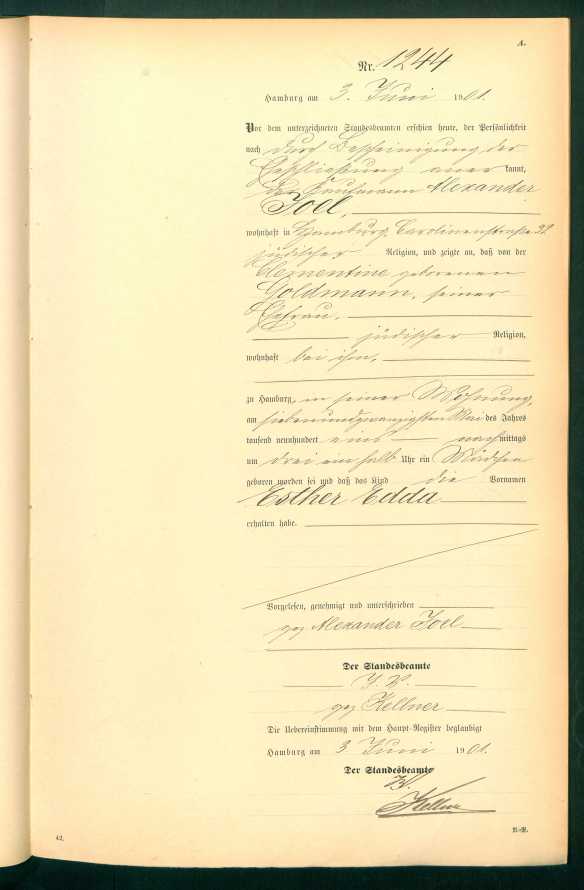 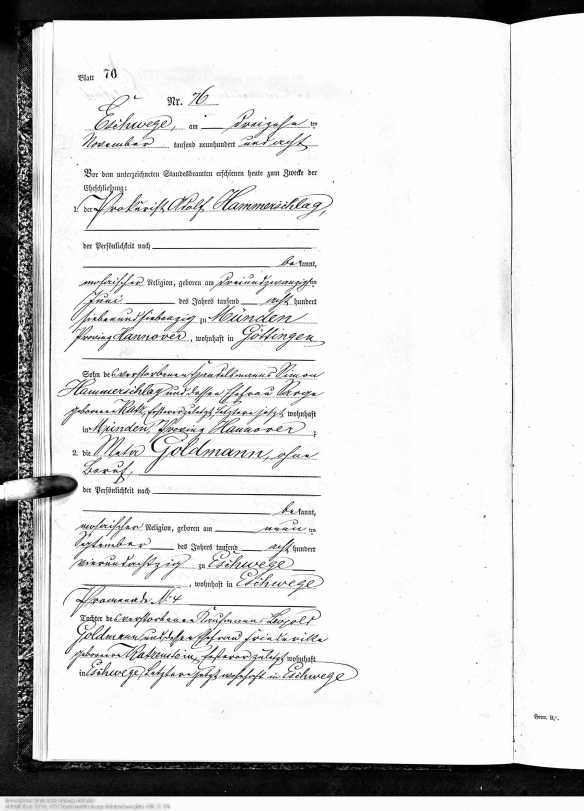 Clementine and Meta’s brother Karl did not marry and died when he was only 36 on January 30, 1914, in Eschwege. I wish I knew why he died so young. 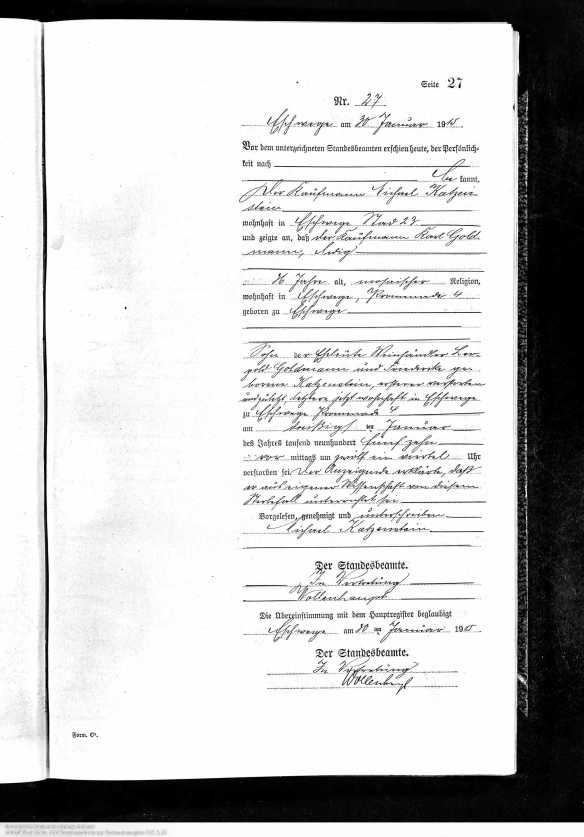 In the 1920s, the daughters of Clementine Goldmann and Alexander Joel began to marry. Although I don’t have marriage records, I assume that Clementine’s daughter Esther Edda Joel married Hermann Wolf in the early 1920s because they reportedly had two sons born before 1925, Fernand Moshe Werner and Pierre Kurt, at least one of whom was born in Saarbrucken, a city at the border between France and Germany.5 According to his death record, Hermann was the son of “Mauricio” Wolf and Clare Tannenberg, but since, as we will see, he died in Mexico, I assume that his father’s name was more likely Moritz than Mauricio. Hermann was born in Hannover in 1897.6

Esther Edda Joel’s sister Lizzie also must have married in the 1920s as she also had two children born in that decade, Vera in 1925 and Ruth in 1928.7 Lizzie married Siegfried Haas, who was born in Mardorf, Germany, on February 6, 1896, to Adolf Haas and Fredericke Marx.8

The youngest Joel sister, Ille, also married in the 1920s, I assume, as she had two children in the 1920s. Her husband was Walter Cunow, and unfortunately I have no primary sources for either Ille or Walter, only profiles on My Heritage and Geni that do not provide sources. However, one of the profile managers for their profiles and for those of Ille’s sisters may be a relatively close relative, whom I have contacted but not yet heard back from. At any rate, according to My Heritage, Walter Cunow was born on February 2, 1899, in Berlin to Martin Cunow and Helene Friedenberg.9

Fredericke lived to see at least some of her granddaughters marry and the birth of her first great-grandchild. She was 68 when she died on February 4, 1924. 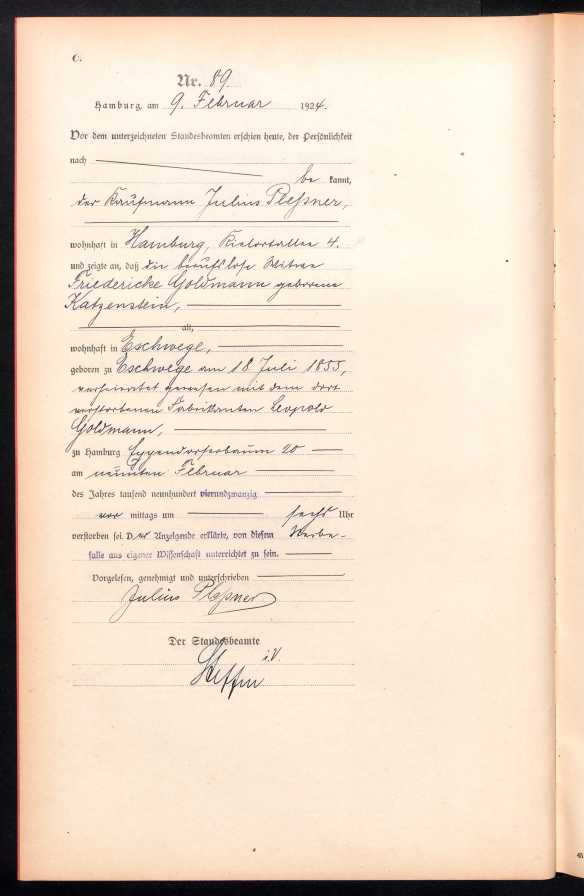 Fredericke Katzenstein Goldmann had outlived her husband Leopold by 25 years and her son Karl by ten years. She was survived by her two daughters, Clementine and Meta, her five granddaughters, and that first great-grandchild with the others born after her death. As we will see, she was blessed in some ways to have died before the Nazis took control of Germany in the 1930s.