My great-great-grandparents Frances Nusbaum and Bernard Seligman had three children who survived to adulthood: my great-grandmother Eva, whose adult life I’ve written about here, and her two younger brothers, James and Arthur, my great-great-uncles.  First, I will write about James and his family.

The east side of Main Street (also known as East Temple Street) in Salt Lake City, Utah. The photo was taken in the 1890s by photographer Charles Roscoe Savage.. (Photo credit: Wikipedia)

By 1900 James had brought his family to live in Santa Fe.  According to the 1900 census, James and Ruth and their two young children were living with James’ parents Bernard and Frances, and James was working as a clerk in a dry goods store—obviously, Seligman Brothers.  James also became involved in Santa Fe politics and was elected in October, 1900, to serve on the executive committee of the Santa Fe County Democratic Central Committee. (“Democratic Central Committee,” Santa Fe New Mexican, October 24, 1900, p. 4)

It must have been not long afterwards that Bernard and Frances left Santa Fe and moved to Philadelphia, where Bernard spent the last few years of his life before dying in 1903.   In 1903 James became president and general manager of Seligman Brothers when the business incorporated and his uncle Adolph left the company.  In a very short amount of time, James had become a leader in the Santa Fe political and business community.

In 1910, James listed his occupation on the census as a retail merchant of dry goods and as an employer (as did his brother Arthur). By 1917, however, he was serving as the postmaster for Santa Fe. (“Troops Are Disappointed,” Albuquerque Journal, March 31, 1917, p. 3, mentioning James L. Seligman as postmaster of Santa Fe.) I do not know whether this was a full time position or whether he also continued to work at the family business.  His entry on the 1920 census only listed his position as postmaster as his occupation.   (His brother Arthur was the mayor for some of these same years, making me wonder who was really in charge of the Seligman Brothers business at that time.)

James’ entry in the 1920 Swarthmore Register lists many of his activities and does not even mention Seligman Brothers::

Meanwhile, James and Ruth’s children were growing up.  Morton, after starting college at the University of New Mexico, was notified in May, 1914, that he had been accepted into Annapolis, the US Naval Academy.  He enrolled that June and graduated in June, 1918, in the top third of his class.[1]  His long career with the Navy will be discussed in my next blog post.

Midshipmen walking to class at the US Naval Academy in Annapolis (Photo credit: Wikipedia)

Morton’s younger sister Beatrice also went away to school, The Wolcott School for Girls in Denver.  In May, 1917, she appeared in Shakespeare’s Comedy of Errors at the school, according to the May 13, 1917, Denver Post (p. 10).  I thought it a little surprising that Beatrice was so far from home, but then found the following news article:

“Word was received here last night of the death of Miss Beatrice Seligman, daughter of Postmaster and Mrs. James Seligman.  Miss Seligman has been ill for some time and was in Denver in the hopes of gaining better health through special treatment.  Mrs. Seligman has been with her daughter and Mr. Seligman left this morning for Denver.”  (“Miss Seligman, Santa Fe Girl, Dies in Denver,” Wednesday, July 28, 1920, Albuquerque Journal, p. 4)

Although I do not know what illness Beatrice was fighting, it must have been very hard for her parents to send her so far away in hopes of improving her health.  No matter how many times I read about a parent losing a child, it never fails to upset me and make me wonder how those parents coped with the loss.

As I wrote in my prior post, the 1920s were not good years for the Seligman Brothers business.  Although Seligman Brothers was still listed in the Santa Fe directory in 1928, the general manager was someone named Evelyn Conway, not anyone named Seligman.  James and Ruth Seligman had started a new venture, Old Santa Fe Trading Post, filed with the State of New Mexico in March, 1929. http://www.bizapedia.com/nm/OLD-SANTA-FE-TRADING-POST-INC.html   James described his occupation on the 1930 census as a merchant in the antiques business.  The 1930 directory for Santa Fe listed James as the president and his wife Ruth as the secretary-treasurer of the Old Santa Fe Trading Post, as did the directories for 1932, 1934, 1936, and 1938.  On the 1940 census, James again listed his occupation as an antiques dealer.

It would be interesting to know why James left Seligman Brothers and formed a different business.  As we will see, Arthur also had moved on to different ventures by the 1920s.  Did the business fail because the brothers lost interest, or did they move on because the business was failing?  Somehow I think it is more likely the former as both James and Arthur seemed to have other interests, both having served in public office. 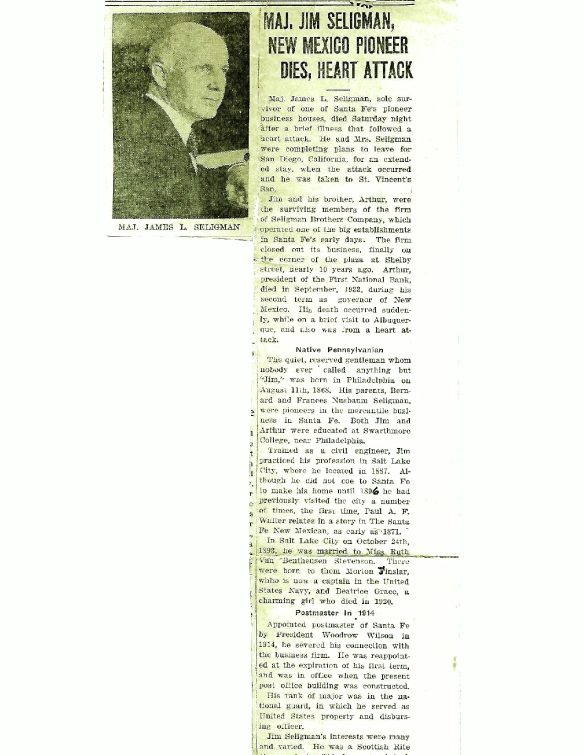 UPDATE:  My cousin Pete wrote about James Seligman, our mutual relative, on his website.  You can see it here. 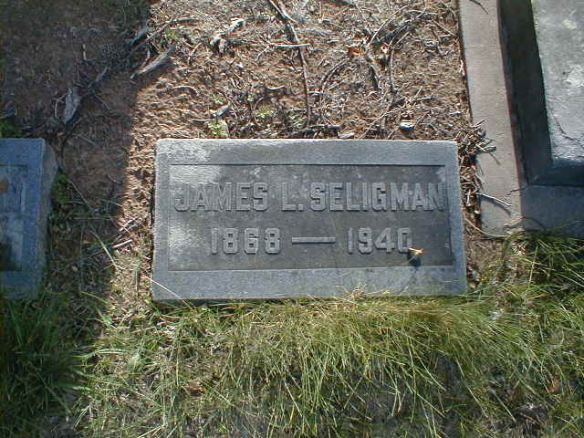