About ten days ago I wrote about the documentation that confirmed that Zusi Rosenzweig—also known as Sonsa, Ceci, Cecile, Celie, Susie and Susan Mintz—was my great-grandmother’s sister and the aunt who met my grandfather Isadore at Ellis Island in 1904.  I also knew that she had married a man named Harry Mintz in December 1896, but it appeared that Harry had died by the time of 1900 census since Zusi, as Sonsa Mintz, was listed as a widow on the 1900 census, living with Jake and Rachel Reitman.

I also believed that I had found evidence that Zusi had had a son Nathan, born in December, 1897, but had not further evidence of him until he was living with Zusi at the time of the 1915 census.  I believed Nathan had married a woman named Gertrude in 1930 and had had a daughter named Susanne in 1932, one year after his mother Zusi/Susie had died.

Although I was able to research fairly deeply into Jake and Rachel Reitman from the public records, I could not find any familial link between Zusi and either Jake and Rachel.  On Jake and Rachel’s marriage certificate, their parents’ names are all revealed, and no one has a surname that I can link to the Rosenzweig/Goldschlager/Strolowitz family.  I still don’t know if Sonsa Mintz is in fact Zusi, and if it was, I have no idea why she was living with the Reitmans. 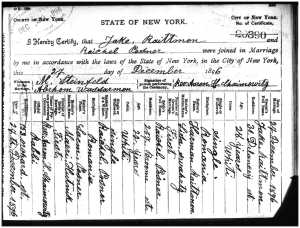 The Nathan Mintz who married Gertrude in 1930 was the same: son of Susan “Rosenberg” and Harry Mintz. 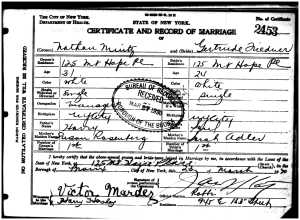 Thus, Susanne is Zusi’s granddaughter and her namesake.  The death certificate for Harry Mintz dated 1924 neither confirmed nor contradicted what information I had because it is not the same Harry; this one had only been in the US for four years, was older, from Poland, and married to a woman named Ida. 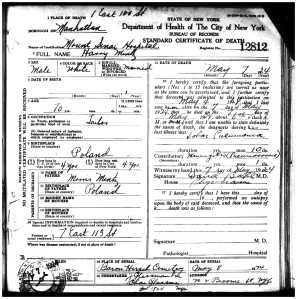 But there were some surprises in the documents; first, I received a second birth certificate for a baby Mintz born in December, 1897, Nathan’s twin, Hyman: same parents, same birth date, same doctor.

I immediately wondered why I had not seen any future references to Hyman and suspected the worst.  I checked the death index, and Hyman Mintz died in January, 1898, a month old infant.

Moreover, the New York City birth certificate form asked how many children were born to this mother before this delivery and how many of those children were still living.  On both Nathan and Hyman’s birth certificates, it says that Zusi had had one prior child and that three were still living.  So who was this first child, and where was she or he living? Zusi and Harry had only been married twelve months when the twins were born, so they could not have had a prior child (well, at least one conceived since they had married).  Zusi had been a 24 year old widow when she married Harry; she must have had a child with her first husband, perhaps in Romania before immigrating to the US.  She was only a teenager when she emigrated.  I have what I think could be the ship manifest listing Zusi as a passenger on the Ethopia, arriving in New York City on September 30, 1890; there is no child with her.

Did she leave her child behind in Iasi for her family to raise? Why did she return to her maiden name if she’d been married? Perhaps there never was a marriage?  I can guess, speculate, but not know for certain.

So what do we know and what don’t we know about this woman who met my grandfather at Ellis Island? We know she married Harry Mintz, had twin sons Nathan and Hyman, but only Nathan survived.  Nathan grew up, married Gertrude, and had a daughter in 1932 named Susanne.  Zusi died in 1931. What we don’t know is what happened to Harry or what happened to her first child.  We don’t know where Zusi and Nathan were between 1898 and 1915. And we don’t know whether Nathan and Gertrude had additional children, whether Susanne had children, whether there are any living descendants of the elusive Zusi Rosenzweig.