A key lesson I’ve learned over the months I’ve been doing genealogy work is that it is important to go back and look at documents and information you received over and over again.  Something that seemed unimportant or confusing when first viewed can take on a lot more meaning after you’ve learned more about a family or a person.  So while I am waiting for new documents, I took the opportunity to review some old documents.

I went back to look at the information I had for Isidor Strolowitz Adler, Tillie and Jankel’s oldest child.  I did this because I noticed (for the first time) that on the 1910 US census that Tillie said that she had been married for 27 years.

The Strolovitz Adler family with Isadore and Betty in 1910

Since she was a widow, the first time I looked at this it did not seem relevant.  This time I thought there might be a clue here as to when Jankel had died.  Assuming that Isidor was born within a year of marriage, as seemed to be the case in so many of the marriages of that era, if Tillie and Jankel were married the year before Isidore’s birth and were married for a total of 27 years, I might get a better estimate of when he died (or disappeared).

So I turned to Isidor’s information and saw that I had an estimated date of birth of 1883 based on the fact that Isidor was listed as 27 on the 1910 census.  According to his death certificate, he was 31 years, two months at the time of his death on April 23, 1915, giving him a birth date of February, 1884.

Since Bertha, the second child, was born in February, 1885, it certainly is feasible that Isidor had been born twelve months earlier.   Unfortunately, these were the only two documents I had for Isidor since he died so soon after arriving in the US.  I am hoping my Iasi researcher will find his birth record (he has located birth records for two of Isidor’s siblings; more on that in a separate post), but I decided to see if I could find a ship manifest for Isidor.

On my entries for Isidor I had two different arrival dates: 1901 and 1903.  His death certificate in 1915 said he’d been in the US for twelve years, giving me 1903.  The 1910 census said that he had arrived in 1901.  Although the 1910 census indicated that Isidor had petitioned for citizenship, I’ve yet to locate that petition.  And I had no ship manifest.  Although I had found ship manifests for all of his siblings and for his parents, I’d not been able to locate one for Isidor.  I’d searched for Isidor, Isaac, Ira, and Israel and all the variations of his last name, but had not found anything.

But this time I vaguely remembered something: in the records for his father’s hearing at Ellis Island, Isidor had been referred to by another name.  I went back to look at those records and found that Isidor had been identified as Srul. 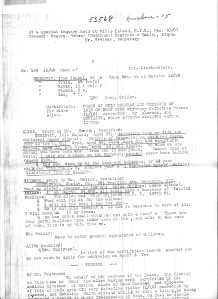 I had learned from one of my JewishGen contacts that Srul was a Yiddish version of Israel—that Srulowitz means son of Israel.  So Srul had become Israel and then Isidor in the US.  The transcript also said that Srul was 26 in January, 1908, making his birth year 1883.

So I went back to the Ellis Island search engine created by Steve Morse and searched again, using Srul, and lo and behold—there it was.  Strul Strulovici, age 19, had arrived on January 12, 1902, from Jassy, Romania, via Hague on the ship La Gascogne.   That would make his birth year either 1883 or 1882.  So I am no more certain of his birth year and thus no more certain of when his parents had married.  But assuming they were married sometime between 1881 and 1883, that would mean that Tillie became a widow between 1908 and 1910, which is what I already assumed.

But I did learn something new from the manifest.  Under the column asking who was meeting Strul/Isidor in America was the entry “Uncle.”  I have to believe that this was his mother’s brother, Gustave Rosenzweig, my great-great uncle, the same uncle who stood up for Jankel in 1908 and posted a bond, the same Gustave who acted as a witness at his niece’s wedding.  I can only imagine all the other things that this man did that were not documented for eternity.  This new finding gave me the incentive to go back and learn more about Gustave and his children.

So keep reviewing those documents.  You never know what you will learn a second time or third time or even a fourth time through.

6 thoughts on “Uncle Gustave to the Rescue Again”