One thing that has been clear to me for a long time is that women are much harder to track in vital records than men, largely because they traditionally changed their names when they married. The Rosenzweig daughters are a case in point.

I have now located and tracked from birth to death the five sons of Gustave and Gussie: Abraham, David, Jacob, Harry and Joe. For those who survived to adulthood, I know who they married, where they lived, and what they did for a living and their military service.  I still need to trace the children of Abraham and Jack, but I wanted to see what I could find about the five daughters of Gustave and Gussie first.  I’ve been looking all along, but kept hitting walls and so decided to focus on one daughter at a time.  Here’s what I know about Lillian.

The oldest child and the only one born in Romania was Lillie or Lillian.  According to the 1900 census, she was born in July, 1884, in Romania, but since that was only a month after Gustave and Gussie’s marriage, it seems likely that this was an error and that Lilly was probably born during 1885. The census also says that Lillie arrived in 1884, but her father’s naturalization papers say that he arrived in 1887.  In 1900 when she was only fifteen years old, Lillie was working as a typist while her younger siblings were all in school.

In 1905 the family had moved to Fulton Street in Brooklyn, and Lillian, now 21 according to the census, was doing housework as her employment.  In addition to the siblings listed on the 1900 census, there were now two additions, Rachel, who was four, and William, who was three.  William is described as a son of the head of the household, which led me to believe that he was another child of Gustave and Gussie.  I was unable, however, to locate William on the birth index as William Rosenzweig, nor did he reappear on the 1905 or 1910 census with the family.

Once again I searched the death index for a child of Gustave and Gussie, but could not find a death record for William Rosenzweig either.  If he was not living with his “parents” and siblings in 1905, where could he be? I searched on ancestry.com for William Rosenzweig and found him living at the Brooklyn Hebrew Orphanage in 1906.  I knew it was the right boy by his age (four years old), the address from where he was taken (1021 Fulton Street, Brooklyn), and his mother’s name—Lillian nee Rosenzweig.

William Rosenzweig at the Brooklyn Hebrew Orphanage in 1906

William was not Gustave and Gussie’s son, but Lillian’s son.  His father is only identified as “Frank (dead),” with no surname.  For the other children listed, their father’s first name is also all that is supplied, but that’s because the child presumably has that surname.  For William, his surname is the same as his mother’s—Rosenzweig, and no surname is given for his father.  I could not find any marriage record for a Lillie or Lillian Rosenzweig between 1900 and 1902 to a Frank, so had Lillian had William out of wedlock? Who was Frank? Was he really dead?

I did find a Frank Cramer who died between 1902 and 1906 and a William Cramer born on March 2, 1902, the birth date provided for William on the orphanage records.  I sent for the birth certificate for William Cramer, but unfortunately that William’s parents were not named Frank and Lillian.

Then last night I went back once again to the marriage index and looked again for a marriage record for Lillian Rosenzweig, but this time I did not limit my search to grooms named Frank.  I restricted the dates to 1900 to 1902, based on the fact that Lillie was single in the 1900 census and that William was born in March, 1902.  I found one marriage of a Lillie Rosenzweig in July, 1901, to a Toscano Bartolini.  Could Frank have been his more American nickname?  I turned to the death index and searched for a death record, and there it was—Toscano Bartolini had died on April 27, 1904, at 27 years old.  Finally I looked for a birth record for a William Bartolini and found one—born March 9, 1902, a mere eight months after Lillie’s wedding to Toscano in July, 1901.  It was all starting to come together.  I obviously have to send away for all these records to be sure that Lillie is Gustave’s daughter and that William is Lillie’s son, but it certainly seems likely that the records will back up my hunches here.  In fact, I checked today on FamilySearch for Toscano Bartolini and found a more thorough description of the marriage record, including a reference to the bride’s parents’ names, Gustav and Gussie.  I will still order a copy of the certificate, but I am now certain that Lillie married Toscano, who died just a few years later, leaving her with a two year old son named William.

After finding all this, I remembered something that Joe’s grandson Ron had told me—that one of Gustave’s daughters had married someone who wasn’t Jewish, and Ariela had said she thought one of the sisters had married someone with an Italian name.  Ron had told me that the family was not happy about this, and that for a long time there was some estrangement.  Despite whatever they felt, however, in 1905 after Frank/Toscano died, Gustave and Gussie took both Lillian and her son into their home.

It also occurred to me that perhaps the reason Lillie used the name Rosenzweig for William and not Bartolini was based on the fact that he was being taken to a Jewish institution.  Obviously Rosenzweig would seem more clearly Jewish than Bartolini.

But why he was taken from the home in 1906 is not explained by the records. The orphanage record indicates that William was discharged to his mother on September 3, 1906, and reports that her address was then 307 East 120th Street in Manhattan, so perhaps there was a falling out with the family.   But in 1910, Lillian was living again with her parents and siblings in Brooklyn, and William was not living with her.  Lillian’s occupation was listed as a trained nurse at a hospital, and she was listed as single, not widowed.  But where was William? 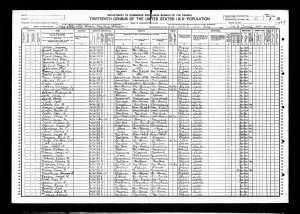 I had not been able to find him as William Rosenzweig in the 1910 census, but now I searched for William Bartolini and found him, living at a residential facility, St. John’s Home in Brooklyn.

Maybe Lillie placed him there so that she could get training to be a nurse.  Perhaps she just could not take care of him.  Perhaps I can find some records from St John’s Home.

I also was able to find where William was in 1915: another home for children, this one the New York  Catholic Protectory, in the Bronx. (Interestingly, this facility was located where Parkchester is today; Parkchester is an apartment building complex developed by Metropolitan Life Insurance Company in the Bronx and is where my grandparents, my aunt and uncle, and my parents once lived; I lived there also until I was four and half years old.)

It seems that in both 1910 and 1915 William had been placed in Catholic institutions after being at a Jewish orphanage briefly in 1906.  Had Lillie given up her parental rights? Was neither set of grandparents interested or able to take care of the boy? Was William troubled or disabled in some way that made caring for him at home a problem for everyone?  I don’t know the answers, but will try to find out what happened to William after 1915.  Apparently you can order microfilm from the Family History Library and see the actual records for the children who resided there, which I plan to do.

And I cannot find Lillie in 1910 or thereafter.  She was not living with her mother and siblings in 1915 or in 1920.  I cannot find her as Lillie Rosenzweig or as Lillie Bartolini.  Perhaps she remarried and changed her name, but I have not yet found a marriage record.  But now I know that I just have to keep looking.  I almost gave up after Frank Cramer did not pan out.  And then last night I looked a different way and found Toscano Bartolini. I hope I can eventually uncover what happened to Lillie and to William.

17 thoughts on “Women are Difficult…to Find and Track, Part I: Lillian Rosenzweig”