One thing that has amazed me before in my research is how often various lines in my family interconnect, like the Hano, Nusbaums, and Cohens in Philadelphia.  In researching the Schoenthals, I’ve once again encountered one of those twists in my family tree.

In my September 25 post I shared the numerous records I was able to find, with the help of several others, for my Schoenthal ancestors, including the marriage record of my great-great-grandparents, Levi Schoenthal and Jhette (or Henrietta) Hamberg in 1839.  That record revealed that Levi’s father was Heinemann Schoenthal and his mother Hendel (or Handel) Beerenstein.  For the moment that is as far back as I’ve been able to go with my Schoenthal line, though I hope to be able to find more about the earlier history of both the Schoenthal line and the Beerenstein line.

Thanks to the research done by David Baron and my third cousin Roger Cibella, I now know that Heinemann and Hendel had at least one other child, a daughter named Fradchen or Fanny, who was born in 1800 in Sielen, making her twelve years older than her brother Levi. (Hans-Peter Klein has uncovered another sibling, Minna, but that’s a story for another day.)

Unfortunately I’ve not yet found a birth record for Fanny, but there is a marriage record to support that conclusion.  David and Roger sent me a copy of this marriage record dated September 10, 1844 from Oberlistingen, a town very close to Breuna (and now one of the districts of the town Breuna).

As translated for me by Matthais Steinke, the record records the marriage of Fradchen Schoenthal, daughter of Heinemann Schoenthal and Hendel Beerentstein, to Simon Goldschmidt, son of Jacob Goldschmidt and Hewa Seligmann.  (No, I do not think Hewa Seligmann was related to my Seligmanns, but who knows? But that’s not the twist here.)  The record lists Fanny as 37 years old in 1844, thus born in 1807.  Simon is listed as 42 on the marriage record and is described as a master tailor.

According to David and Roger’s research, Simon had been married once before to Edeline or Ella Katzenstein. (I also don’t know if Simon’s first wife was related to my Katzensteins, but I am looking into that.  But that also is not the twist here.)  Simon and Ella had five children before Ella died in 1840. Their children ranged from Jacob, who was 16 when his mother died, down to Josias, who was only a year old when Ella died. There were also two daughters, Lena and Hewa (Eva), and another son, Joseph.  Four years after Ella died, Simon married Fanny.

Almost exactly a year after their wedding, Simon, Fanny, and Simon’s nine year old daughter Eva (Hewa) from his first marriage emigrated from Germany to the United States, arriving in Baltimore on the ship Marianne on September 20, 1845. Simon listed his occupation as a tailor on the ship manifest. 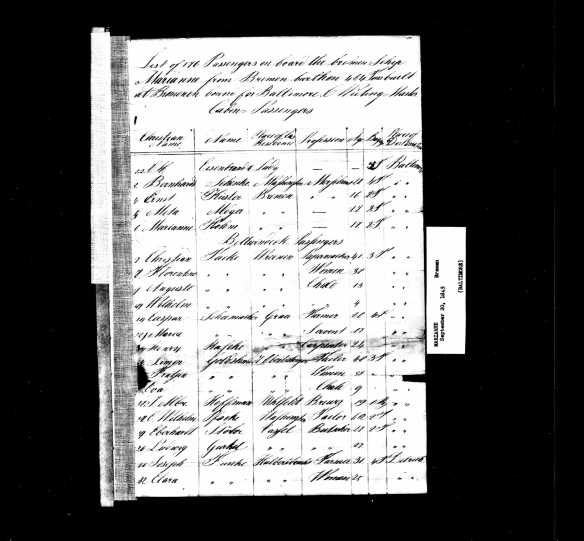 On January 10, 1847, Fanny gave birth to a son, Henry.  One year later Fanny and Simon had another child, a daughter named Hannah, born on June 5, 1848.  Both Henry and Hannah were born in Baltimore, Maryland.[1]  In 1850, the family was living in Pittsburgh along with Simon’s two daughters from his first marriage, Eva and Lena.  (The census record has many errors, but it is clear that this is Simon and Fanny’s family even though the record has the names mixed up and the ages inaccurate.)

Tragically for the family, just two years after giving birth to Hannah, Fanny died in 1850.  She was buried at Troy Hill Jewish Cemetery in Pittsburgh.   Some readers might remember that that is also where the elusive Fanny Wiler is buried, another mother who left young children behind after an untimely death.

By 1860, Simon Goldsmith had moved with his two young children to Washington, Pennsylvania, a town about 28 miles to the southwest of Pittsburgh.    Simon, Henry, and Hannah were living with Simon’s son from his first marriage, Jacob, who was now 35 years old, according to the 1860 census, and working as a merchant.  Jacob and his wife had six young daughters of their own by 1860, so it must have been quite a crowded household.[2]

Washington, Pennsylvania (called “Little Washington” by some locals) was then a town of 3,587 people, according to the 1860 census reports, and had grown by 34% since the prior census in 1850. There was not yet a railroad line to the town at that time.  What drew all those people to this town?  The town’s website does not provide many clues in its history section:

With immigrants from the west of Scotland and the north of Ireland, and with many transferring their homes from the eastern and central parts of Virginia, the vicinity of Washington was settled in 1768. The Pennsylvania legislature passed an act on March 28, 1781, erecting the County of Washington and naming Catfish Camp as the place for holding the first election. This was the first county in the U.S. to bear the name of Washington.

The town started with every evidence of progressive tendencies, as the original plot dedicated a tract of ground to the people for recreational purposes. A lot was given for a courthouse where the current building now stands, and Lots 43 and 102, according to the plan, were presented by Mr. Hoge to “His Excellency, General Washington, and Mrs. Washington.” Part of the townsite had been the camp of Tingoocqua, who was a chief in the Kuskuskee tribe of Indians.

There is a very detailed history[3] of Washington, Pennsylvania, available online through the University of Pittsburgh Historic Pittsburgh website.  One tidbit I picked up from this history was that Jacob Goldsmith served on the town council in 1858.

Unfortunately, most of this text is devoted to describing the political history of the area and the individuals who were political leaders, and I could not get a sense of what drew people to the area initially.  Was it the proximity to Pittsburgh? Was it a good location for trade? Was agriculture the primary source of income? Whatever the reason that drew people there initially, the town had existed for many years by the time my relatives arrived.   From the 1860 census, I know that Jacob was a merchant, and I assume that with a town of over 3,500 people, there would have been a large enough population to support many merchants.

One thing seems clear, however.  When Simon Goldsmith lived in Washington, Pennsylvania, in 1860, there was no synagogue there.  The first synagogue in all of Washington County, Beth Israel, was not founded until 1891. Although my ancestors had lived in small towns in Germany with very small Jewish communities, they had at least had synagogues and schools and cemeteries for their community.  I am not sure that when Simon arrived, there were any such facilities.

Why, you might wonder, am I dwelling on this town in western Pennsylvania where the widower of my great-great-grandfather’s sister lived with his two children? Because six years later, my great-grandfather’s brother Henry Schoenthal arrived in Washington with his wife and children, and some of his siblings followed in the years after.  Last to come in 1881 was my great-grandfather Isidore, accompanied by his mother Henrietta and his sister Rosalie.  And 23 years later in 1904, my grandmother Eva Schoenthal was born in Washington, Pennsylvania, the youngest child and only daughter of Isidore Schoenthal and Hilda Katzenstein.  It seems to me that Henry did not choose Washington randomly, but rather based on the fact that his first cousin Jacob Goldsmith and his aunt’s widower Simon Goldsmith were living there.

But I promised you a twist, and I still haven’t delivered.  Here it is. Simon Goldsmith was not only my great-great-aunt’s husband; he was also my four-times great-uncle himself.   Simon Goldsmith, husband of Fanny Schoenthal, had a brother named Seligmann Goldschmidt.  Seligmann had a daughter named Eva, just as his brother Simon did (both named for their grandmother, Simon and Seligmann’s mother Hewa).  Seligmann’s daughter Eva Goldschmidt was my great-great-grandmother; she married Gerson Katzenstein, my great-great-grandfather, and they were the parents of Hilda Katzenstein, who married Isidore Schoenthal, nephew of Fanny Schoenthal. Hilda Katzenstein and Isidore Schoenthal were my great-grandparents.

Stated as simply as possible, Simon Goldsmith was my four times great-uncle.  His wife Fanny Schoenthal was my three times great-aunt.   My grandmother Eva Schoenthal was a first cousin once removed from Henry Goldsmith, Simon and Fanny’s son, through her father’s side and his mother’s side: 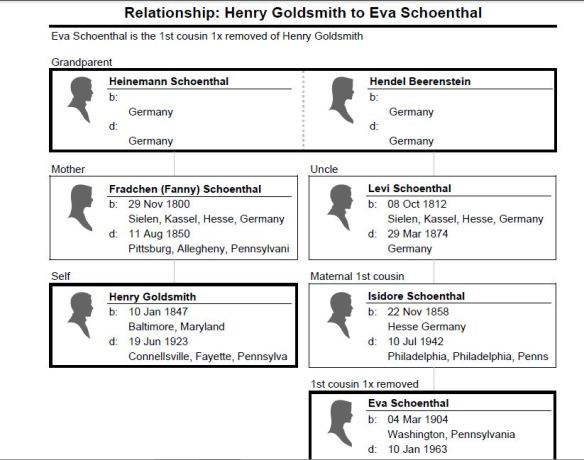 She was also his first cousin twice removed through her mother’s side and his father’s side: 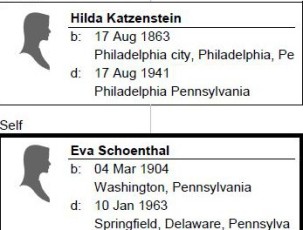 They may have all left Germany, but they were still marrying within families they knew from back home.  Just another twist in my increasingly twisted family tree.  And more evidence of the limited gene pool created by endogamy and of the limited value of DNA predictions for Ashkenazi Jews.

[2] One thing that bothers me is that I cannot find out what happened to some of the other children of Simon Goldsmith and Ella Katzenstein.  Lena moved to Columbus, Ohio, after marrying Gustav Basch, and Joseph had died as a baby in Germany even before Ella died.  Eva immigrated with her father and step-mother, but then disappeared after the 1850 census; I assume she married. I’ve no idea what happened to Josias; perhaps he died before Simon left Germany, or maybe Simon left him behind with another family member.  Since they are not directly related to me, I am trying not to get too distracted looking for them, but eventually I will have to try and find out what happened to Josias and Eva.

[3] Title: History of Washington County, Pennsylvania: with biographical sketches of many of its pioneers and prominent men

19 thoughts on “Another Twisted Family Tree Story: The Goldsmiths/Goldschmidts”