Skip to primary content
It’s been a while since I left off with my discussion of my Schoenthal relatives, in particular the ten children of my great-grandfather Isidore’s brother, Simon Schoenthal, and his wife Rose Mansbach.  Of their nine children who survived to adulthood, I have discussed Harry, who made his life in Atlantic City where his parents had moved in the 1890s and remained; Gertrude, who married Jacob J. Miller and settled for many years in Arizona; and Louis, who moved to Los Angeles and San Francisco and may have spent part of his career working as a showman in the carnival industry.  Now I will write about the next two sons: Maurice and Martin, both of whom ended up together for at least some years in the midwest---in Chicago. 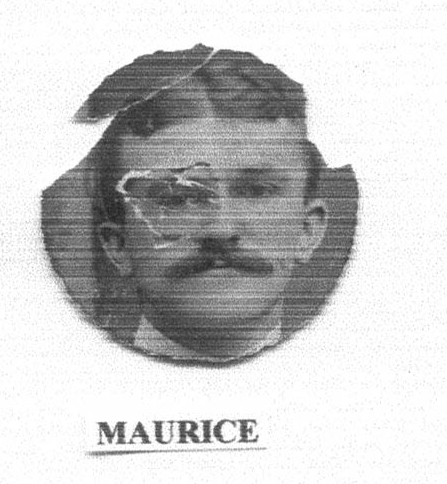 Maurice Schoenthal, born in 1879, had been working with his brothers in 1904 in Atlantic City as a manager of their pool hall, but by 1910 he had relocated to Saint Louis, Missouri.  I’ve no idea what drew him to St. Louis, but he is listed as residing there on the 1910 census, lodging with the family of Ferdinand Bach.

But there is something odd about the census entry.  It says that Maurice was a Missouri-born lawyer in private practice, which made me think this was not the right Maurice Schoenthal.  But the entry underneath is for a Louis Mayer, described as a Pennsylvania-born bookkeeper for an automobile store.  Could the two lines have been accidentally switched by the enumerator?  A search for Louis Mayer in the St. Louis directories confirmed my hunch.  Louis Mayer was a lawyer, my cousin Maurice must have been the Pennsylvania-born bookkeeper.

I don’t know when Maurice arrived in St. Louis nor, as I said, what brought him there, but I know what kept him in the midwest.  On September 8, 1910, he married Blanche Woolf, as seen in this news item:

Blanche was born in 1881 in St. Louis, the daughter of George Woolf, who was born in New York, and Leah Morris, who was born in England.  George Woolf had died in 1908, and in 1910 Blanche was living with her mother and siblings.  Her oldest sibling, Morris, was already married and the owner of a silk business, Morris Woolf Silk.  Although Maurice and Blanche were still living in St. Louis in 1913, by 1914 they were living in Chicago, where Maurice was working as a credit manager.  As reflected on his World War I draft registration, he was the credit manager for Morris Woolf Silk, his brother-in-law’s business.

Maurice and Blanche had two children born in 1913 and 1918.  In 1920 they were all still living in Chicago, and Maurice was still working as a credit manager for the silk company.  Morris Woolf Silk at one time must have been a very successful business; a search on newspapers.com brought up many ads from papers in many states: Texas, Kansas, Indiana, Ohio, and Illinois, for example.

In the spring of 1920, Maurice represented the company on a trip across the country with over forty other “prominent” or “notable” businessmen (yes, just men) from Chicago that included stops in several cities, including El Paso, Texas,  Los Angeles, San Francisco and San Bernardino, California, Portland Oregon, and Phoenix, Arizona. See, e.g.,  “Chicago Party to Visit Phoenix Next Wednesday,” The Arizona Republican, May 3, 1920, p. 8; “Chicagoans Are to See Valley This Morning,” San Bernardino Daily Sun, May 6, 1920, p. 7; “Chicago Business Men Guest of City,” Portland Oregonian, May 18, 1920, p. 11.

During these years, Maurice’s younger brother Martin was also living in Chicago.  In 1910, Martin had been living with his mother and younger siblings, working in the family laundry business, but by 1914, he is listed as a salesman in the Chicago directory.  His World War I draft registration is more specific; Martin was working as a car salesman.

(Interestingly, he listed as the person who would always know his address a Mrs. R. Schoenthal of Tucson, Arizona.  When I saw that, I assumed it was his mother, Rose Mansbach Schoenthal, who must have been living her with her daughter Gertrude Schoenthal Miller at that time, but who was back in Atlantic City by 1920. I checked the 1917 Tucson directory to confirm that Rose was in fact living at the same address in Tucson as Gertrude that year.)

In 1920, Martin was still living in Chicago, according to the 1920 census.  He was living as a lodger, and he reported his occupation as a manufacturer, Federal Bakery.  But after that I cannot find any document or other source that indicates that Martin was in Chicago after 1920. 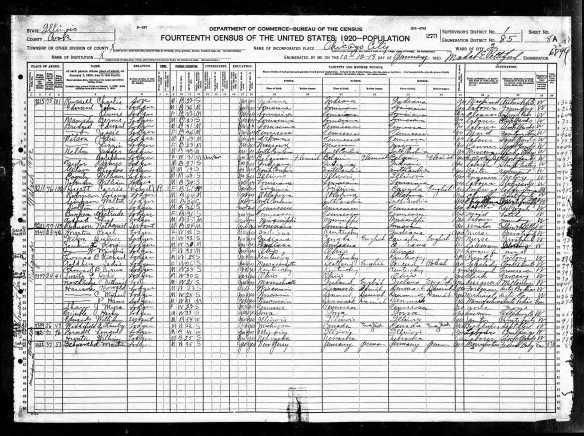 From what I can gather from various newspaper articles and advertisements as well as some court decisions, Federal System of Bakeries of America was a supplier of baking equipment to associated bakeries all over the United States.  This news article from 1920 described them as a $25,000,000 enterprise with over 600 stores all over the country.  “Missouri Fair Price Commission Asks Department of Justice to Investigate Why Price of Bread Was Raised,” Rockford (Illinois) Republic, February 27, 1920, p. 9.  This ad conveys something about the business model of the Federal System of Bakeries.

Martin may have run into trouble with his own store because on July 23, 1920, the Chicago Daily Tribune ran a classified ad on p. 24:

At any rate, I cannot find a listing for Martin in Chicago in the 1920s.   The directories that are available on Ancestry.com for Chicago during those years do not include alphabetical listings of residents, only directories by business category or address, so Martin might have been there, but I did not find him under Bakeries nor by the address I have for him from the 1920 census.

I was able to locate Maurice in the 1920s, however, because he and Blanche had moved to the Chicago suburb of Evanston, Illinois, by 1925.  He was still working in the silk business as a credit manager, according to these directories (1925, 1927) and according to the 1930 census.

Meanwhile, Martin had returned to Atlantic City by 1931.  I cannot find him at all on the 1930 census, but he is listed in the 1931 Atlantic City directory, working as a distributor and living at 141 St. James, the address of the Lockhart Hotel where many members of his family had lived in prior years.  In 1938 he was living at 161 St. Charles Place and working as a clerk.  According to the 1940 census, he was working as a hotel clerk and still residing at 161 St. Charles Place, where his sister Estelle and her family were living and running the Klein-Haven Hotel.

As for Maurice, according to the 1940 census, he had had a career change and was no longer working for Morris Woolf Silk; he was now working as a broker in the commercial real estate field. It appears that Morris Woolf Silk had liquidated its stock in the summer of 1929 (although Maurice had still listed his occupation as credit manager for a silk company on the 1930 census.) 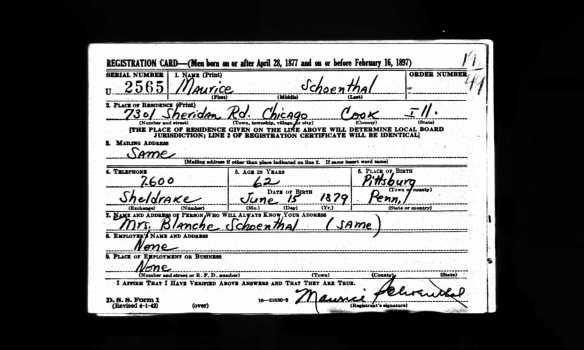 Martin Schoenthal died in Atlantic City on September 22, 1946.  He was 67 years old and was buried with his parents at Mt. Sinai cemetery in Philadelphia.  As far as I can tell, he had never married or had children.

His brother Maurice was living in St. Petersburg, Florida, in 1952, but that is the only year for which I can find a listing for him in that location, nor can I find him in any other directories or sources after 1942.  I cannot find a record for Maurice’s death, but I did find Blanche’s death certificate.  When she died on July 1, 1965, she was already a widow, so Maurice must have died sometime before that date.

Maurice and Martin Schoenthal: two brothers, two years apart in age, who had started their adult years in business together.  After Maurice married and settled in Chicago, his younger brother Martin followed him there and lived nearby for several years.  But whereas Maurice seemed to have both personal and business success in Chicago, Martin returned to his former home in Atlantic City to work, as so many in Simon Schoenthal’s family did, in the hotel business.

12 thoughts on “Two Brothers in Chicago: One Stayed, One Left”