We saw in the last post how the first decade presented some sad challenges and losses for the family of H.H. Mansbach.  The family matriarch Nannie Hirsch Mansbach died unexpectedly in 1907, the youngest son Isaac was institutionalized, and Louis Mansbach’s wife Clara died at age 36. 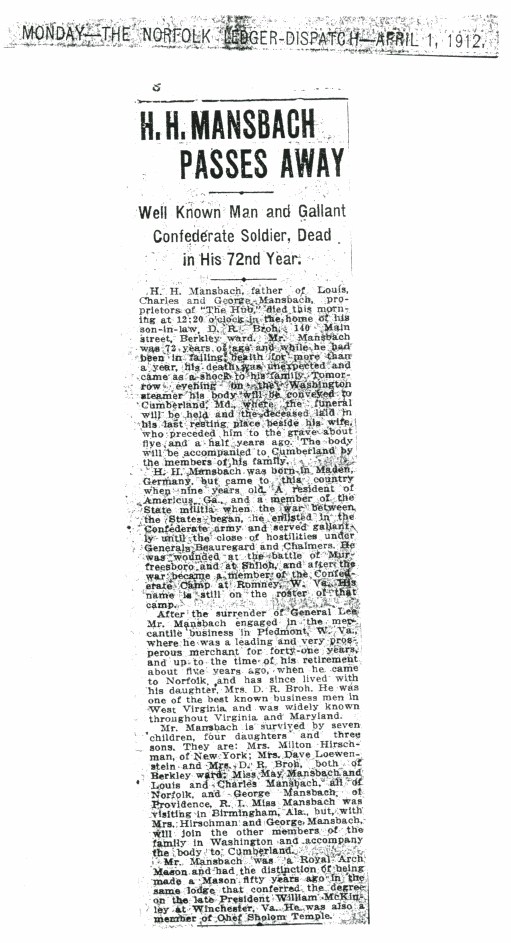 H.H. Mansbach, father of Louis, Charles, and George Mansbach, proprietors of “The Hub,” died this morning at 12:20 o’clock in the home of his son-in-law, D.R. Broh, 140 Main Street, Berkley ward.  Mr. Mansbach was 72 years of age [sic: he was 71] and while he had been in failing health for more than a year, his death was unexpected and came as a shock to his family.  Tomorrow evening on the Washington steamer his body will be conveyed to Cumberland, Md., where the funeral will be held and the deceased laid in his last resting place beside his wife, who preceded him to the grave about five and a half years ago.  The body will be accompanied to Cumberland by the members of his family.

H.H. Mansbach was born in Maden, Germany, but came to his country when nine years old. [There is no record to support this assertion; records instead show that he came in 1856 with his uncle Gerson Katzenstein when he was sixteen; even his older brother was not in the US in 1849 when H.H. would have been nine.]  A resident of Americus, Ga., and a member of the State militia when the war between the States began, he enlisted in the Confederate army and served gallantly until the close of hostilities under Generals Beauregard and Chalmers.  He was wounded at the battle of Murfreesboro and at Shiloh and after the war became a member of the Confederate Cap at Romney, W.Va.  His name is still on the roster of that camp.

After the surrender of General Lee, Mr. Mansbach engaged in the mercantile business in Piedmont, W.Va., where he was a leading and very prosperous merchant for forty-one years, and up to the time of his retirement about five years ago, when he came to Norfolk and has since lived with his daughter, Mrs. D. R. Broh.  He was one of the best known business men in West Virginia and was widely known throughout Virginia and Maryland.

Mr. Mansbach is survived by seven children, four daughters and three sons. [Once again Isaac is not included in the list of survivors; the rest of the children were named and their residence locations as indicated above were identified.]

Mr. Mansbach was a Royal Arch Mason and had the distinction of being a Mason fifty years ago in the same lodge that conferred the degree on the late President William McKinley at Winchester, Va.  He also was a member of Ohef [sic: Oheb] Shalom Temple.

H.H. was survived by his eight children and (eventually) seven grandchildren. He was buried next to his wife Nannie at Eastview Cemetery in Cumberland, Maryland.

His children carried on his business and his name.

H.H. and Nannie’s youngest child, May, married in 1914; her husband was Sigmund Louis Emanuel, who was born in Gloucester, Massachusetts, in 1876, but had lived most of his life in New York City.  In 1910, when he was 33, he was living with his parents and some of his siblings in Queens, New York, and owned a clothing manufacturing business with his father.

How did he meet May, who was living in Virginia? My guess—the Emanuels supplied clothing to the retail clothing business owned by the Mansbach family, and a connection was made.  Or possibly May’s two sisters Hattie and Bertha who lived in New York set her up with Sigmund.  May and Sigmund would have one child, a daughter Nanette born in 1916 in New York City.

In 1920, four of the Mansbach siblings were living in Norfolk: Louis, Charles, Bertha, and Fannie. In fact, Louis, Fannie, and Bertha were all living in one household, along with Fannie and Bertha’s husbands and children.

Their brother George was living in Baltimore, sisters May and Hattie in New York, and brother Isaac in the state hospital in Sykesville, Maryland.

The siblings appear to have remained close. In 1920, Louis traveled to St. John’s Newfoundland with Fannie and her family.  In 1923, Louis, Hattie and her family, and Fannie all traveled to England together.   Fannie’s husband Daniel Broh did not travel with them, and three years later he died of stomach cancer at age 60.  According to his death certificate, he had been ill for eight years, so presumably he was not well enough in 1923 to travel with Fannie and her siblings. 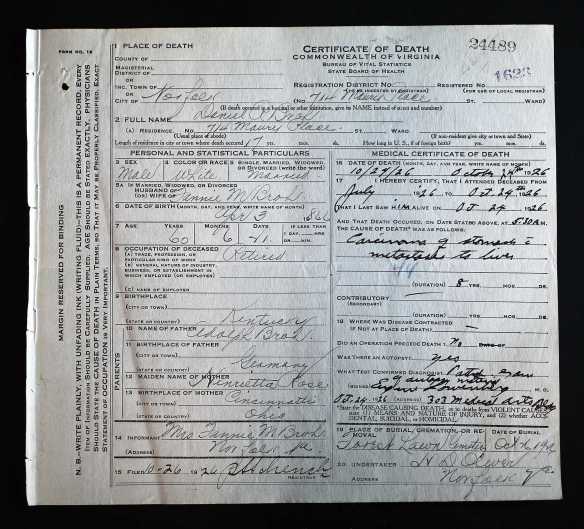 Charles and Louis traveled to Key West together in 1928.  A year later Charles’ wife Regina died at age 47 of heart disease caused by rheumatic endocarditis, which she had contracted thirty years earlier, according to her death certificate.

Thus, by 1930, three of the eight Mansbach children had lost their spouses: Louis, Charles, and Fannie. Fannie and Louis were living in the same household in Norfolk with their sister Bertha and her husband David Loewenstein and their son in 1930.  None of them was working at that point. Although the census record lists Fannie as “Deborah Danial,” it is evident to me that this is Fannie based on the fact that “Deborah” is described as the sister of the head of household (Louis), is the same age that Fannie would have been in 1930, and was born in West Virginia.  My guess is that the census enumerator heard “Fannie Broh” as “Danial Deborah” and wrote it that way on the form.

Isaac remained institutionalized, Hattie was still in New York, and George was in Baltimore.  George was living with his wife Bessie, her brother Arthur, and her mother; both he and Arthur listed their occupations as retail clothing merchants.

In 1936, another Mansbach sibling lost a spouse when David Loewenstein, Bertha’s husband, died at age 68 from heart disease; his death certificate also notes that he had suffered from locomotor ataxia for 27 years. 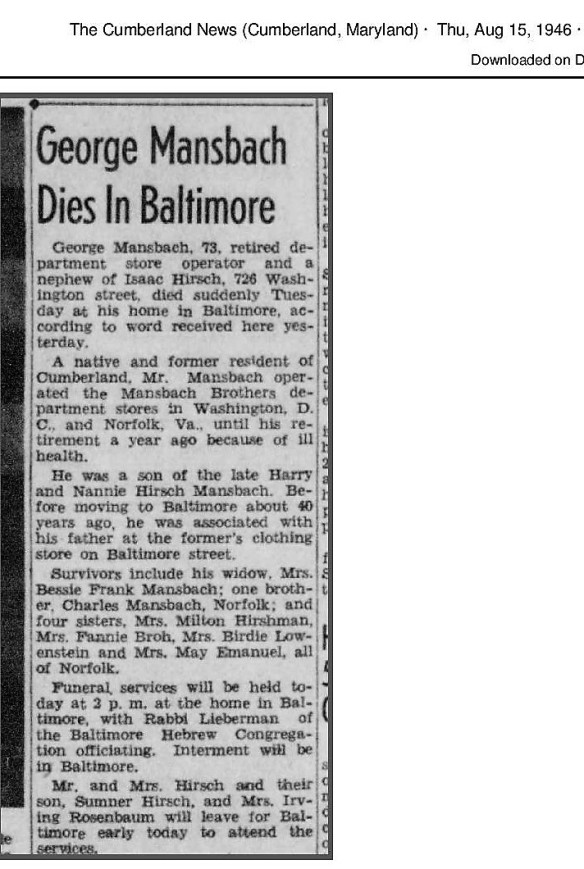 Again, Isaac is not mentioned as a survivor although he was still living at that time. 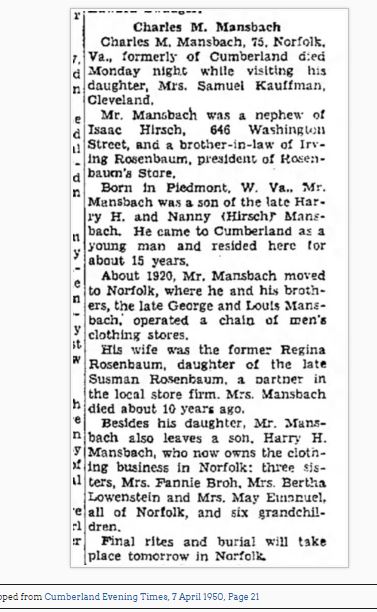 When I think about the life and legacy of my cousin H.H. Mansbach, nephew of my great-great-grandfather Gerson Katzenstein, it is quite remarkable. From the beginning his life was filled with challenges.  His mother died on the day he was born (July 3, 1840).  He came to America as a sixteen year old, sailing with his uncle Gerson and family.  He moved far from the family, living in several states including Georgia, where he joined the Confederate Army in 1861 and was injured twice in his four years of service in the Civil War.

Then he settled in West Virginia, married, and had eight children, meanwhile establishing himself as a very successful merchant.  He lost his father and siblings all within a ten year period from 1883-1893, and then lost his wife Nannie in 1907.  Five years later he was buried beside her at Eastview Cemetery in Cumberland, Maryland, the town where his wife had first lived in the US and where H.H. himself had lived for many years. 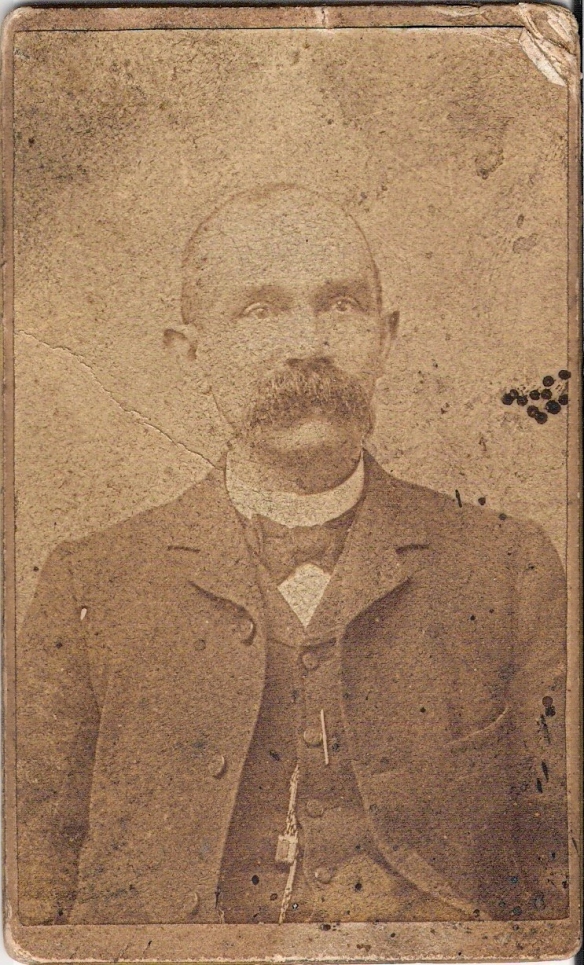 His eight children benefited from his remarkable success as a merchant.  Almost all of them were involved in some way in the family’s department store business.  They all lived well.  Many of them lived close to if not with each other in Norfolk, Virginia.  Sadly, many of them also suffered losses— Louis had a child who died as a baby and then lost his wife Clara when she was in her thirties.  Charles also was widowed at a young age as was Fannie.  Isaac lived his entire adult life in a psychiatric facility.

But overall H.H. lived a good life with many successes and accomplishments.  In addition, he was survived by seven grandchildren who continued his legacy.