In my last two posts, I wrote about Abraham Katz and the decision he made in 1910 to move his family from Louisville, Kentucky to Sapulpa, Oklahoma, where business opportunities seemed more promising for him and his children. By 1920, Abraham Katz and his large family were well-established in Oklahoma.  Four of the ten children were married, one, Bertha, had died at a tragically young age, and five of the ten children were still living at home.

During the 1920s, four of the other Katz children married. Florence, who had been living at home in 1920, had married by 1921.  Her husband was Solomon Frisch, who was born in Springfield, Illinois, but grew up in Athens, Illinois, the same town where Lester Katz’s wife Mayme had grown up.   Solomon was the son of Isaac and Sophia Frisch, who were immigrants from Hungary and Germany, respectively; Isaac was a bookkeeper. In 1917 when he registered for the World War I draft, Solomon had his own store in Athens.

Florence and Sol must have married not long after the 1920 census, as their daughter Sarah Jean was born on November 18, 1921. In 1930, they were living in Stillwater, Oklahoma, and Sol was working as a dry goods merchant.  Stillwater was, as mentioned in an earlier post, the town where Abraham Katz’s nephew (and Florence’s first cousin) Jake was also a dry goods merchant, and Sol was working with Jake in Stillwater in the Katz Department Store.

Benjamin Katz also married in the 1920s.  His wife, Sadie Bardine, was the daughter of two Russian immigrants, Isaac and Molly Bardine; Sadie was born in Kansas City, Missouri, where she grew up.  In 1920, she was working as a stenographer in a law office.  Sadie and Ben were married on June 12, 1924, in Kansas City. 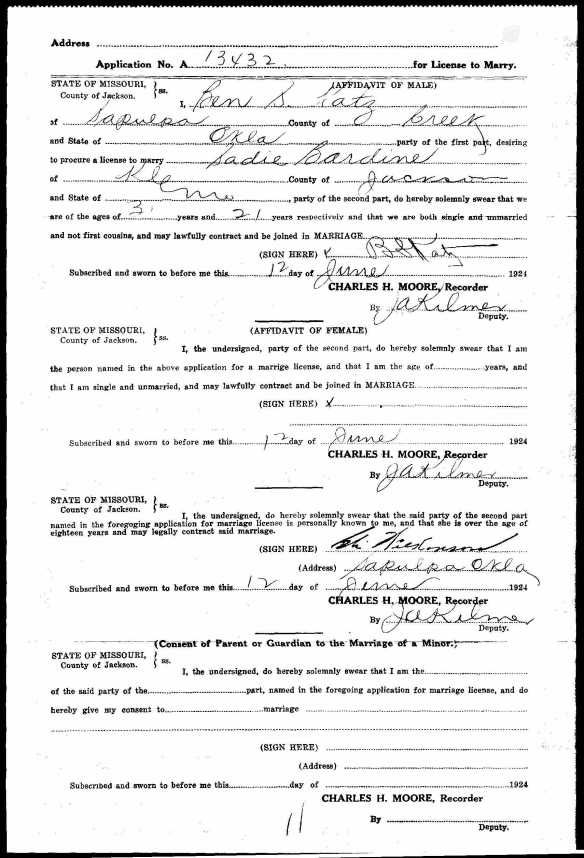 According to the Encyclopedia of Southern Jewish Life published by the Goldring Woldenberg Institute of Southern Jewish Life,  “Sadie came from an Orthodox family and found it very daunting to adapt to her husband’s classical Reform Judaism and the difficulty of finding kosher meat in Sapulpa. She lived with Ben in Sapulpa from 1924 until 1926, when Ben decided that a life as a shoe clerk was not enough.”

It was at that point that Ben and Sadie moved to Ada, Oklahoma where in 1926, Ben and his brother Sidney purchased a long-established department store together in Ada, as reported in the April 15, 1926, issue of the Ada Weekly News (p. 4):

A deal will be closed today in which one of Ada’s oldest department stores changes hands and tomorrow morning, unless present plans go amiss, Simpson’s will open its doors under the banner of Katz Department Store.

Sidney and Ben Katz will be in charge of the store here, having arrived here several days ago from Bristow, where they made their home for six years. …

Although the new owners of the store establish this store here as another link to the chain of stores they operate in the Southwest, their desire is to impress the public with their public spirit in the interest and advancement of the town.  …

An extensive and commendable news article in a Bristow paper deplored the loss of Sidney Katz from its business fraternity. “Sidney Katz has been in Bristow for the past six years coming here to open the Bristow store.  During the time he has been a resident of this city, he has been one of the liveliest workers the city has had.  He has had a part in every worth while [sic] move that Bristow civic organizations have made, and members of the organizations say that his loss as a citizen will be felt.

Ben and Sidney ran the store together in Ada for many years. More on that to come.

Abraham and Amelia’s youngest daughter Henrietta also married in the 1920s.  She married her sister Bertha’s widower, Ben Levine, on June 28, 1925. In 1930, they were living with their first two children in Chickasha, Oklahoma, where Ben was (guess) a dry goods merchant.

Chickasha is 134 miles from Sapulpa. According to the Encyclopedia of Southern Jewish Communities published by the Goldring Woldenberg Institute of Southern Jewish Life, in 1919, Chickasha had a Jewish population of about 125 people.  The Encyclopedia reports that, “By far the most prominent and long lasting Jewish business in Chickasha was the Dixie Store, owned by friends and distant cousins Charles I. Miller and Ben Levine. Charles and Ben had opened the store in 1919, and “Charles and Ben became icons in the Chickasha community, running a newspaper ad for their department store every day for over 50 years.”

When Sigmund Katz married Elizabeth Pattison on September 23, 1926, he was the fourth child of Abraham and Amelia to marry since 1920. His wife Elizabeth was the daughter of William Pattison and Ersula Wade.  Her father was born in Ohio, and her mother in Tennessee, where Elizabeth was also born. In 1900, when Elizabeth was four, the family was living in Florence, Alabama, where William was a lumber dealer. By 1920, however, Elizabeth’s father had died, and she and her mother were living with her grandparents in Allen, Oklahoma, where Elizabeth was working as a public school teacher.  Allen is only 19 miles from Ada, where Sigmund’s brothers Ben and Sidney were living. 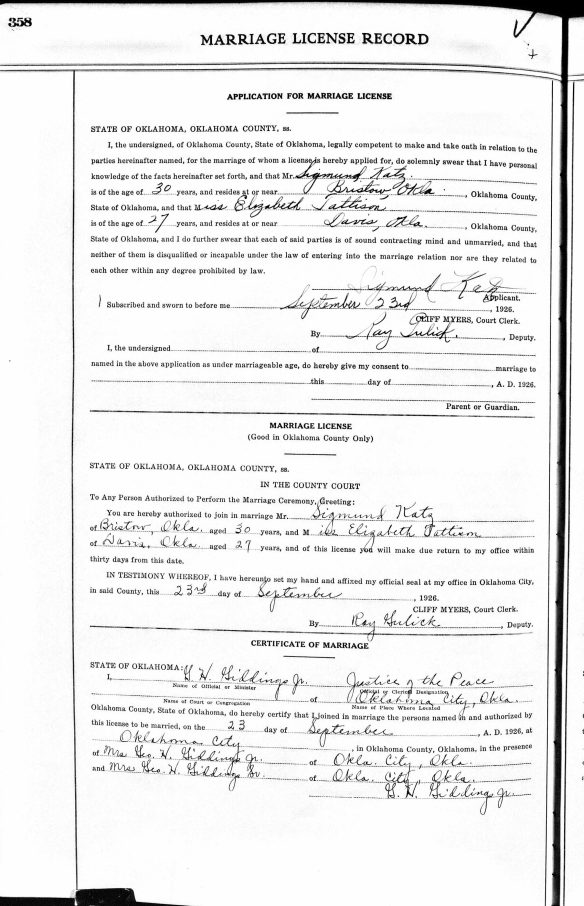 In 1930, Sigmund and Elizabeth were living with their first two children in Bristow, Oklahoma, where Sigmund’s sister Rachel was also living.  And yes, Sigmund was also a dry goods merchant.

By 1930 then, Abraham and his wife (listed as Millie here) were living with only two of their nine surviving children, Blanche and Milton, their youngest child, who was then 28. Abraham, who was now 79 years old, was still working as a merchant, and Milton was working as a clerk in the family store with his father and brother Lester.. Blanche was not employed outside the home, nor was her mother.

Thus, by 1930, Abraham and his sons and sons-in-law had established quite a number of dry goods stores in various towns in Oklahoma.

Abraham J. Katz died on July 29, 1936, at age 85. According to the records of the funeral home, he died of uremic poisoning and heat prostration.

The Sapulpa Herald of July 30, 1936, reported his death on its first page:

According to the obituary, Abraham died at home in Sapulpa after being critically ill for two weeks. The obituary also reported that Abraham had lived in Sapulpa since August, 1910, the first time I’ve seen the date so specifically pinpointed.  The obituary also commented that “Mr. Katz has always been one of the communities [sic] most generous donors to charity.  He is well known for his philanthropies here throughout the years.  He has been a member of the Chamber of Commerce for years as well as other local booster organizations.”

Abraham was survived by his wife Amelia, nine of their ten children, and eleven grandchildren.

In 1940, Amelia, who was then 80, was living in Sapulpa with two of her children: Blanche, who was 56 and not employed, and Milton, who was 38 and working as a clerk in Katz Department Store.

Amelia died in Sapulpa on June 16, 1944; she was 84 years old. The Sapulpa Herald of June 17, 1944, reported her death on its first page, describing her as a “well known local woman.”  She and Abraham were buried together at Fairlawn Cemetery in Oklahoma City.

Abraham Katz, who came to the US as a teenager shortly after the Civil War and started as a dry goods merchant in a small town in Kentucky, left behind quite a legacy for his children and their descendants.  He and his family had established a series of department stores spread over a number of cities and towns in Oklahoma that would continue to support the family long after Abraham was gone, as we will see in the next post.