By 1878, Simon’s daughter Lena and her husband Gustavus Basch and children had moved to Columbus, Ohio.1 According to directories and the 1880 census, Gustavus was now in the vinegar manufacturing business, and his oldest son Frank, now 22, was working with him in the business. I assume it must have been this business opportunity that drew them to Columbus. In 1880, Lena and Gustavus’ four other children—Joseph, Joel, Hinda, and Ella—were also living with their parents. The only child who was not still living at home was their son Jacob, who was living in Hamilton, Ohio, and working as a hotel clerk. Hamilton is about 100 miles southwest of Columbus.2 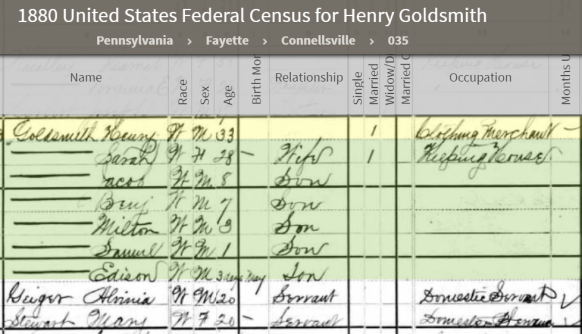 Hannah and her husband Joseph Benedict stayed in Pittsburgh where Joseph is listed on the 1880 census as a rag dealer. Hannah gave birth to her third son, Centennial Harry Benedict, on September 24, 1876, in Pittsburgh.12 In most records he is referred to as either C. Harry or Harry; I assume the Centennial was in honor of the centennial of the Declaration of Independence in the year he was born.

The 1880 census lists not only Hannah and Joseph and their three sons in the household, but also Hannah’s father Simon, and three of Hannah’s nephews: Lena’s son Jacob Basch and Henry’s sons Jacob and Benjamin Goldsmith. Since all three are also listed elsewhere on the 1880 census, I wonder whether these three were just visiting their relatives in Pittsburgh when the census was taken.

On March 17, 1883, at the age of 88 or so, Simon Goldsmith died in Pittsburgh; his death record states that he died of old age. 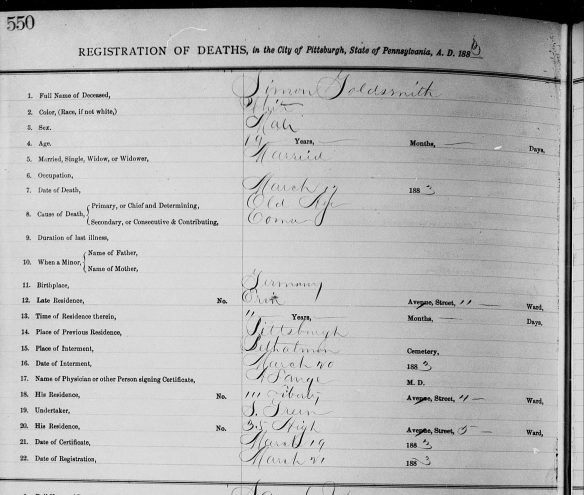 What an interesting, challenging, and rich life Simon had. He was born Simon Goldschmidt, the youngest child of Jacob Falcke Goldschmidt and Eva Seligmann in Oberlistingen. He had five children with his first wife Eveline Katzenstein, two of whom died as infants. He had spent time in prison for burglary, but his marriage and his family stayed together. After Eveline died in 1840, he had married a second time, his second wife being Fradchen Schoenthal. He and Fradchen immigrated to the US in 1845, a year after their marriage, and together they had two more children born in the US. Then Simon lost his second wife Fradchen in 1850. He also lost another child, his daughter Eva, sometime after 1862.

But Simon soldiered on, living first with his son Jacob in Washington and later with his daughter Hannah in Pittsburgh. He saw twenty-eight grandchildren born before he died, and five more were born after he died. In addition, he lived to see the births of eight great-grandchildren, and many more were born after his death. When he died, his children and grandchildren were spread from Philadelphia to California, pursuing and living the American dream. He must have looked at his family with amazement—that this man who had gotten himself in trouble with the law back home in Germany had somehow been able to start over in the US and create a huge legacy for himself and his family. Despite his struggles and his losses, he must have been grateful for all that he did have.