In 1900, Henry Goldsmith and his wife Sarah Jaffa were living with eight of their nine surviving children in Connellsville, Pennsylvania, where Henry was in the insurance business.  Their oldest child, JW, was already married and working as a merchant in Connellsville. Two of their sons were professionals: Milton was a doctor and Samuel was in law school. Henry and Sarah had lost one child, Albert, as a young boy, in 1891, but otherwise life must have seemed very good.

Then on December 23, 1903, their son Edison Goldsmith, just 23 years old, was one of over sixty people killed in a horrendous train accident. 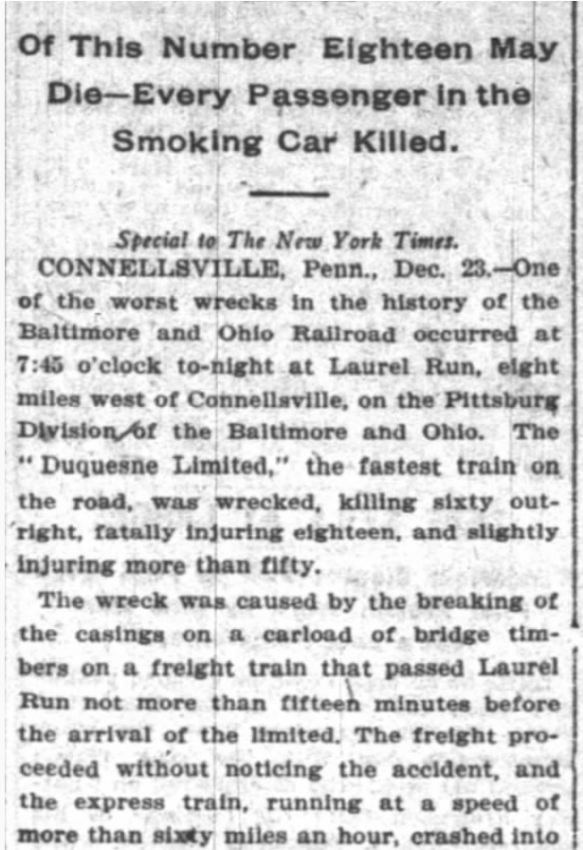 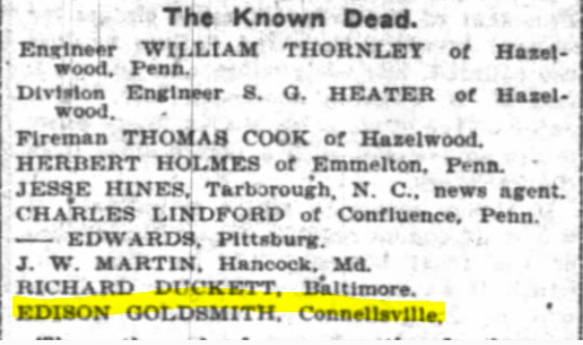 One of the worst wrecks in the history of the Baltimore and Ohio Railroad occurred at 7:45 o’clock to-night at Laurel Run, eight miles west of Connellsville, on the Pittsburg Division of the Baltimore and Ohio.  The “Duquesne Limited,” the fastest train on the road, was wrecked, killing sixty-outright, fatally injuring eighteen, and slightly injuring more than fifty.

The wreck was caused by the breaking of the castings on a carload of bridge timbers on a freight train that passed Laurel Run not more than fifteen minutes before the arrival of the limited. The freight proceeded without noticing the accident, and the express train, running at a speed of more than sixty miles an hour, crashed into the timbers before the engineer even had time to apply the emergency brakes.

Every occupant of the car was dead before the rescuers reached the scene of the wreck. The train contained six cars, one baggage, one smoker, one sleeper, and a dining car, all of which were badly wrecked. Engineer William Thornley and Fireman Cook were caught under the wrecked engine and cannot be extricated for several hours.  The tracks are completely torn up, and traffic over the road cannot be entirely resumed for at least a day.

Nearly all the passengers in the smoker were bound for Philadelphia. Many of them were to take passage on an ocean liner on Saturday for the old country. Not one of these escaped alive.

[Lists of the known dead and injured followed the text of the article, with Edison Goldsmith being among those listed as dead.]

Edison’s funeral was held on December 25, 1903. The newspaper described him as “a popular young man” and said that “an immense concourse attended the services.”1

Edison’s parents, Henry and Sarah, sued the railroad for $20,000 for negligently causing the death of their son. A jury awarded them $3,345, after being instructed by the judge that they should put a reasonable limit on the award. The judge told the jury, “The young man might or might not come up to the expectations of his parents had he not been killed. That should be determined by you in fixing a value on his life.” The news article also noted that an appeal would probably be taken from the verdict, but I could not find any reports of further legal proceedings.2

Losing another son must have broken Henry and Sarah’s hearts. In Sarah’s case, perhaps in a more literal way. She died of heart failure on October 25, 1907, just six days after her 56th birthday. 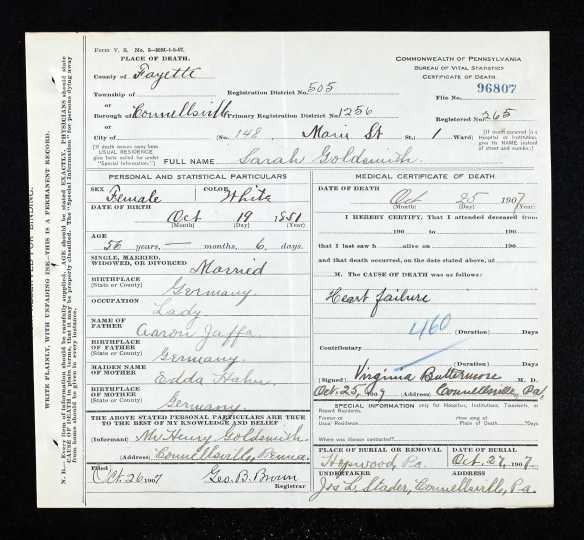 But fortunately, there was also some good news for Henry and his eight surviving children in the first decade of the 20th century. More on that in my next post.

20 thoughts on “Over Sixty Killed in Train Wreck in 1903, including My Cousin Edison Goldsmith”