On August 10, 1911, Henry Goldsmith, then 64 years old, suffered a stroke, rendering him paralyzed and unable to speak.  His condition was reported in the Connellsville paper, as was his continuing improvement.

But Henry had a full recovery. A week later the paper reported that he was able to sit up in bed,1 and by September 18, 1911, he was able to go out and was reported as “recovered” by the newspaper.2 In October, he was re-elected to be president of the board of the People’s Building and Loan Association,3 and the following June he traveled with members of his family to Europe.

By this time even Henry’s youngest child, Helen, was earning a living. Just days after her father’s stroke, she was appointed to be a primary teacher in Connellsville, selected from a field of eight candidates. Like her older siblings, Helen had been an excellent student, graduating from the Connellsville school as valedictorian as had her brother Milton.

I could not post this article without commenting on the paragraph that follows the one about Helen. It so clearly reflects the discriminatory social attitudes of those times by referring to the teacher by his race and to the class by their ethnic background.

Helen’s teaching career in Connellsville did not last very long. On January 20, 1914, she married Edwin Tanzer Meyer; she was 24, he was 23. Edwin was born in Piedmont, West Virginia, on February 28, 1890, to Sigmund Meyer and Anna Tanzer, who were German immigrants. After living for some time in Lonaconing, Maryland, the family moved to Pittsburgh, where in 1910, Sigmund was a salesman in a department store and Edwin was a floor manager in a department store.4

Helen and Edwin settled in Pittsburgh, where they had two children: Edgar J. Meyer, born on March 31, 1915,5 and Malcolm G. Meyer, born January 17, 1918.6 Edwin had become an optometrist in the years between the 1910 census and his registration for the World War I draft. On that registration he reported that he had already served in the ambulance corps in the DC militia. In 1920 Helen, Edwin, and their two young sons were living in Pittsburgh, and Edwin was practicing optometry.7 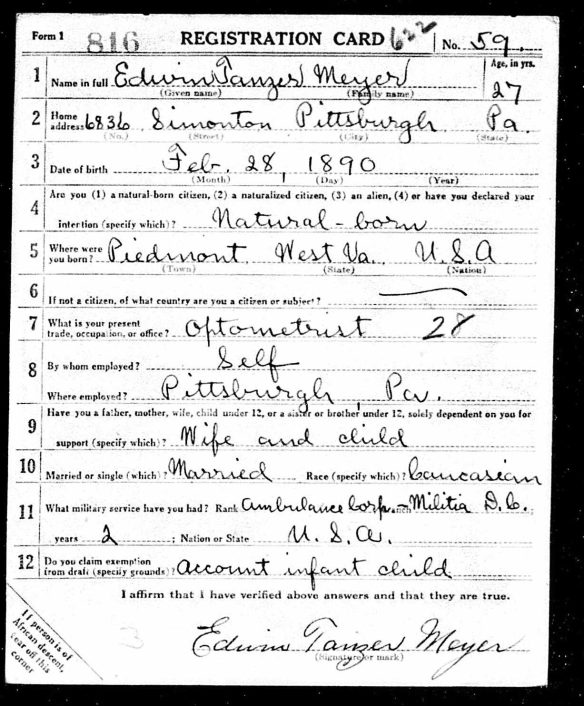 Helen was not the only one of Henry’s children to marry in 1914. Her brother Walter married Ella Rosenberg six months after Helen married Edwin—on June 17, 1914. Ella was the daughter of Herman Rosenberg and Bertha Moskovics. She was born on January 13, 1887, in Csorgo, Hungary. 8 Her family had immigrated to the US in 1890, and in 1900 they were living in Pittsburgh where her father was a liquor salesman. Ella was still living in Pittsburgh in 1910.9

She and Walter settled in Connellsville, where Walter had a dentistry practice. On May 25, 1915 their first child was born; he only lived for 22 days, dying on June 16, 1915, from acute bronchitis and septicemia from a skin infection. Since there was no name given for this child on his death certificate, I imagine he was either premature or very sick right from birth:

Walter and Ella’s second child was born on October 2, 1916. She was named Sarah Jaffa Goldsmith in memory of Walter’s mother.10

At the time of his registration for the World War I draft in 1918, Walter and his family were still living in Connellsvile,11 but by 1920, Walter, Ella and their daughter Sarah were living in Pittsburgh where Walter had a general dentistry practice.12

1914 was also a big year for Florence Goldsmith, though for different reasons. That year she debuted her operetta, “The Pilot of Tadousac,” for which she had written the book, the lyrics, and the music. Unfortunately, I do not know anything about this operetta. Tadoussac is a village in Quebec. I did find this story on a CBC Canadian history website, so perhaps this is the “pilot” that inspired Florence’s operetta:

On June 3, when Champlain arrived in Tadoussac, Dupont-Gravé’s pilot came to greet him in a rowboat. The pilot informed him that Dupont-Gravé had tried to impose his monopoly on the Basque and Spanish captains who were already there, but they had answered him with their muskets and cannons. He took Champlain to the bedside of Dupont-Gravé, who was still alive but seriously wounded.

Together, they negotiated a truce with Darache, the leader of the Spaniards, which allowed Dupont-Gravé’s men to start trading with the Montagnais.

Aside from this reference, I found nothing that revealed the story behind Florence’s operetta. The operetta itself was generally well-reviewed by the local newspaper as seen in this excerpt from a longer article (I excluded the parts describing the cast): 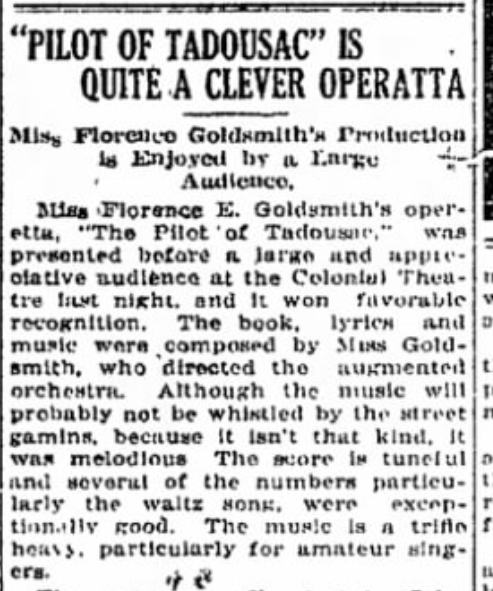 It also was performed in two other locations in Pennsylvania over the next several years. 13 Florence also continued to teach music.14

Then on March 11, 1920, she married Lester Bernstein in New York City.15 He was 38, she was 36. Lester was born in Columbia, Pennsylvania, on May 14, 1881, to Sigmund Bernstein and Marie Omann, who were both immigrants from Germany.16 In 1900, Lester’s father Sigmund was working as a jeweler in Philadelphia, and Lester was a “rodman.”17 According to this website, a rodman was a surveyor’s assistant.

Lester was a Phi Beta Kappa graduate of Lehigh University. In 1910, he was living on his own as a lodger in Baltimore and working as a civil engineer for the railroad. He was still living in Baltimore and working for the railroad when he registered for the World War I draft in 1918, although now he reported his title as statistician. The article about his marriage to Florence reported that he had at one time worked for the railroad in Connellsville as a field engineer, which is probably when he met Florence. 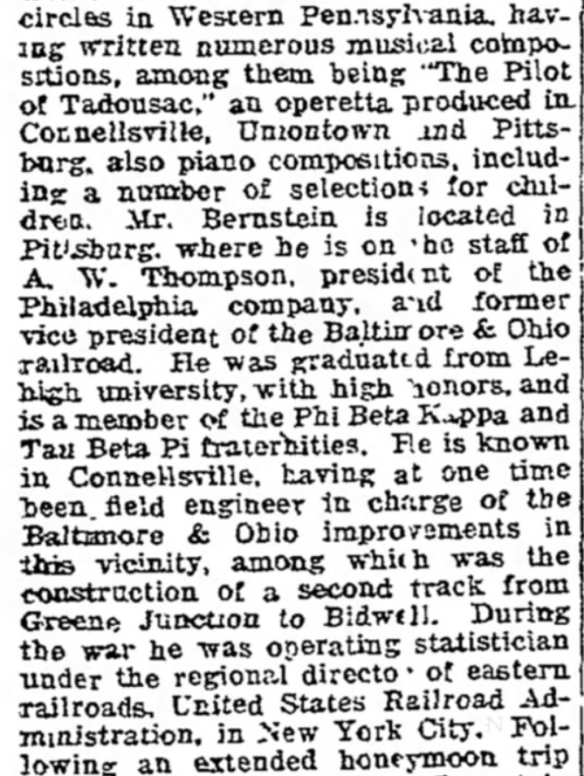 After marrying, Florence and Lester settled in Pittsburgh.  I could not find them on the 1920 census, perhaps because they were still on their “extended honeymoon trip” when the enumeration was done.

Thus, Walter, Helen, and Florence all married between 1910 and 1920. Their other siblings—JW, Benjamin, Milton, Samuel and Oliver—were also busy in those years. More on that in my next post.