After a long break focused on photographs shared by some of my generous cousins, I am now returning to posting about my research of my Goldschmidt/Goldsmith family, the descendants of my four-times great-grandparents Jacob Falcke Goldschmidt and Eva Reuben Seligmann.

They had five children: Seligmann, my three-times great-grandfather; Levi; Meyer; Jette; and Simon. In addition, Jacob had been married twice before marrying Eva and had two children with those wives, Elieser Falcke Goldschmidt and Jude Jacobs, my half-four-times great-uncles. I have already written about Seligmann, Lehman, and Simon and their descendants.1

Now I will turn to the fourth brother, Meyer Goldschmidt. Although I had many secondary sources providing information about Meyer and his family, it was very difficult to find any primary sources, as discussed below. I was very fortunate, however, to connect with a distant cousin in the Netherlands, and he sent me a book published in Israel by Meyer Goldschmidt’s descendants in 1996, Selig Goldschmidt: A Picture of A Life, hereinafter referred to as the Selig Goldschmidt book.2

The book includes remembrances, letters, obituaries, and images that Meyer’s descendants collected and translated to English in order to preserve and honor the memory of Meyer’s son Selig Goldschmidt. It sheds light not only on Selig, but also on his parents, his siblings, and his children.

I also benefited greatly from the research and support of David Baron, husband of my cousin Roger, a descendant of both Meyer and Seligmann Goldschmidt.

There are many trees on Ancestry and other secondary sources that say that Meyer Goldschmidt was born in Oberlistingen on June 10, 1787, but none of them has a primary source for that date. Meyer’s death record says he was 74 when he died on November 5, 1858. That would mean he was born in 1784, not 1787.

Unfortunately, I cannot find a birth or marriage record for Meyer, so I do not know whether the trees are accurate or whether the death record is accurate. This photograph from the Selig Goldschmidt book includes the birth date found on those family trees:

Since I have not located a marriage record for Meyer, I do not know when or where he married, but I do know who he married—Lea Katzenstein. I also have no birth records for Lea, but Ancestry trees and other sources show her birth date as March 20, 1794, in Grebenstein, Germany, and her parents as Jesajas ha Cohen Katzenstein and Edel Ganz.

I presume that Meyer and Lea were married by 1823 because their daughter Sarah was born on December 26, 1823, according to her marriage record.

Another daughter, Ella, was possibly born that same year. Ancestry trees and other sources report that Ella was born March 26, 1823. That date apparently came from her death record: 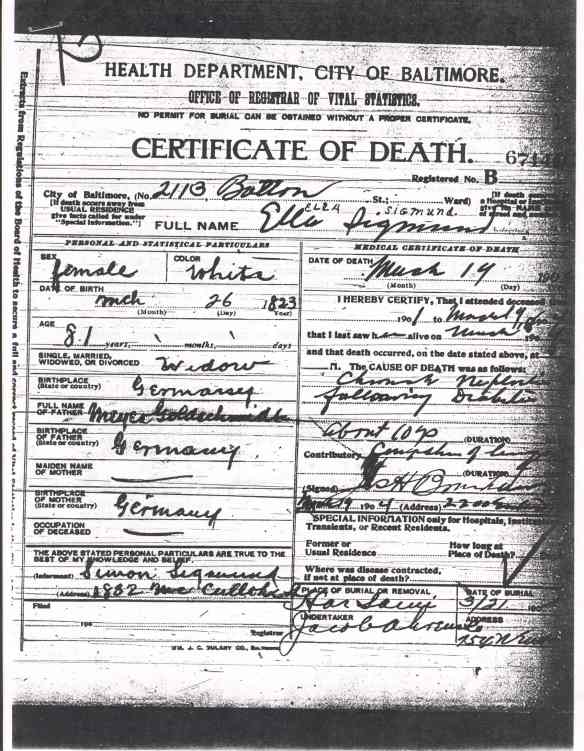 But unless her sister Sarah was conceived the day after Ella was born and was born several months prematurely, that seems impossible. I think Ella was more likely born in 1822. According to obituaries written about Ella when she died on March 19, 1904, and her death certificate, she was 81 years old when she died. That would mean that she was born between March 20, 1822, and March 19, 1823.3

At any rate, we can assume that Meyer and Ella were married by 1823, if not before.  They had seven children: Ella (1822?), Sarah (1823), Malchen (about 1827), Selig (sometimes spelled Seelig) (1828), Joseph (1830?), and Falk (1836). According to David Baron’s Goldschmidt family tree, Joseph died a month before his sixth birthday on November 27, 1836, five months after Falk was born. I am still working on finding records for some of these children and will report on what I find once I do, if I do. But given the depth of David’s research, I don’t think such records exist. All of us are relying on older family trees that include these dates.

Despite this dearth of records, I can tell quite a bit about the lives of Meyer, Lea, and their children based on the Selig Goldschmidt book and other later sources.

Three years after giving birth to her last child Falk at age 42, Lea Katzenstein Goldschmidt died on September 28, 1839. She was 45 years old and left behind her husband Meyer and six children under the age of eighteen.

In the Selig Goldschmidt book, there are some translated remembrances written by Selig in 1887 about his mother Lea. Apparently the family had run into some hard times after Meyer suffered a prolonged illness and was confined to bed and unable to work for fourteen weeks. This took a toll on Lea. Selig wrote:4

My mother, who now rests with G-d, was an ideal woman, wife, and mother. She was beloved in the whole of our district, the benefactress and the support of many poor families. Everyone received ready comfort from her. Even when we were so poor that she could no longer help, people would still seek her advice and share their burdens with her.

I was only nine years old when she died. When I heard the loud sighs and groans of innumerable mourners who wept and cried out, “What shall we do, how shall we manage now that our benefactress is buried?,” I was roused from my childish grief. I asked myself how had she been able to help the needy? We are so poor ourselves that we have barely enough bread and potatoes to eat. I was a wild and carefree boy, but it was probably at this juncture that a turning point occurred in my life.

After her death, the family worked together  to provide for each other.5

Jakob and I had begun to work properly even though I was just ten years and Jakob twelve. Thus, we managed to add a little oil and fried onions to our boiled potatoes. That was quite amusing. Our good and noble sister Sarah fried small slices of onion in a little oil. This was then mixed with hot water and one had to fish out the onion. A big pot stood in the center of the table and each of us dipped his peeled potato into it. He who caught a slice of onion in this way was indeed the lucky one.

Behind our little house we had a small garden which my sister Ella tended. … My sister Ella learned millinery and ran a small millinery shop in our house. …[A]ll of us were working very diligently in order to support our dear father and little brothers and sisters.

These simple paragraphs describing the life of the family of Meyer and Lea Goldschmidt paint a picture of a tight-knit and loving family that managed to deal together with poverty and the tragic loss of their mother. I may not have all the dates and records, but I do have a sense of the values and life of Meyer Goldschmidt and his family.

21 thoughts on “Returning to Goldschmidt Research: A Dearth of Records, but A Wealth of Information”