If you have a really, really good memory and have been reading this blog for over a year, you may remember that back in October 2019—before COVID!—I wrote my first blog post about my 4x-great-uncle, Meyer Goldschmidt, and relied heavily as a source of information about Meyer and his family on a book created in honor of his son Selig Goldschmidt.

The book, Selig Goldschmidt: A Picture of A Life,  was published in Israel by Selig’s descendants in 1996 (hereinafter referred to as the Selig Goldschmidt book),1 and it includes remembrances, letters, and obituaries that were originally compiled by Selig’s son Meyer and that were then translated from German to English by the later generation in order to preserve and honor the memory of Selig Goldschmidt.

Last year I relied on the Selig Goldschmidt book to tell the story of Selig’s parents, Meyer Goldschmidt and Lea Katzenstein, and about the childhood of Selig and his siblings, but now I am returning to the book to focus more exclusively on what it reveals about Selig himself as he grew from a child and spent his adult life in Frankfurt, Germany.

First, some background. Selig was born on March 16, 1828, in Grebenstein, Germany, the fifth child and second son of his parents Meyer and Lea. (I have already written about the first four: Ella, Sarah, Jacob, and Amalie.)

As described in the book, the family was quite poor when Selig was a child, and his father Meyer suffered from poor health, exacerbating the precariousness of their financial position. Then Selig’s mother Lea Katzenstein Goldschmidt died on September 28, 1839 (after having given birth to two more sons after Selig, Joseph, who died when he was six in 1836, and Falk, who was born in 1836). Selig was only eleven years old, and as I wrote about here, he and his siblings had to take on a lot of responsibility for each other and for the youngest sibling, Falk, who was only three.

Once the older siblings began to marry and have households of their own, the financial pressure was reduced. After the youngest sister Amalie married Juda Katzenstein in 1853 and her father Meyer moved with them to Eschwege, Selig and his brother Jacob sold the family home in Grebenstein and moved to Frankfurt,2 where the two brothers established the firm J&S Goldschmidt, which grew to be one of the most famous and successful art and antique dealerships in Germany and perhaps in Europe. More on that to come. But it’s important to remember that Selig and his siblings grew up in poverty before building their business to what must have been unimaginable success.

According to the civil record below, on May 27, 1857, Selig married Clementine Fuld in Frankfurt. She was born in Frankfurt on January 8, 1837, to Herz Fuld and Caroline Schuster, and, as I noted in my prior post, she was the sister of Salomon Fuld, who would later marry Selig’s niece Helene Goldschmidt, daughter of Selig’s brother Jacob Meier Goldschmidt.

However, it appears that Selig and Clementine had been married under religious law nine months earlier. The Selig Goldschmidt book includes a facsimile of their ketubah as well as a translation in English of their marriage contract, and it indicated that they were married on August 20, 1856.3

A letter written by Selig to Clementine on August 31, 1856, reveals that this was a love match; it also suggests how busy Selig was and how often he had to travel for work. Selig, who was away on business in Dinkelspiel at that time, wrote in part:4

I have received your most welcome letter just after my arrival here. [He then described how he spent Shabbos in Dinkelspiel.]… The afternoon passed pleasantly in conversation until after the evening service in the synagogue when I was alone once again. I missed you very much, dear Clementine, and would have gladly paid a lot of money in exchange for half an hour’s conversation with you, if that could have been instantly arranged. Since that was impossible, I did the same as Friday night and went to bed at eight o’clock. I dreamed I was with you, dear Clementine, and I had such a pleasant talk with you and was so happy to be near you that the time passed very quickly. [Selig then wrote that he would be delayed returning to Frankfurt because of business.] … However, early in the following week, please G-d, the happy day of our reunion will arrive. Then, dear Clementine, we will enjoy ourselves and chat enough to compensate for everything we have missed. Yet that joy can only last for two or three days because then I must set out on my journey to Leipzig. Thus man’s happiness is always limited, just as his existence is only brief. However, of what use is such nonsense? After all, that is part of my occupation and you yourself have told me not to neglect my business. We must utilize properly the short time allotted to us, for such is life! If only one would use this time assigned to oneself well, surely the whole world would be a happier place. …

Dear Clementine, please accept sincere greetings and kisses from your affectionate and faithful

Selig and Clementine had six children—five daughters and one son, all born in Frankfurt. First born was Helene, born on February 28, 1858. 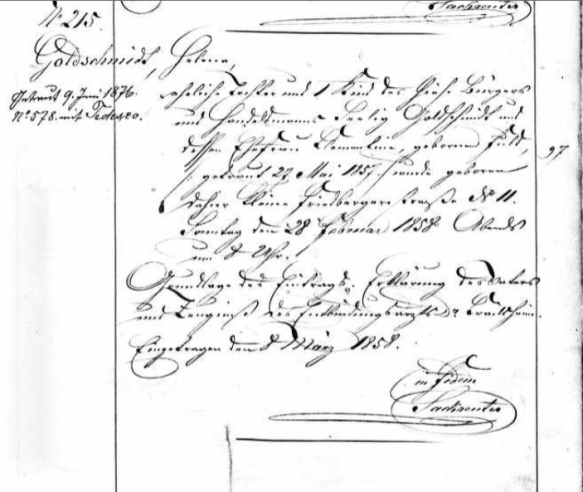 Selig and Clementine’s only son Meyer Selig Goldschmidt was born on October 6, 1865. He was obviously named for his grandfather Meyer.

The last child, Johanna, was born on December 18, 1867. Johanna grew up to marry her first cousin Abraham Stern, the son of Selig’s sister Sarah, and her story has already been told in great detail when I wrote about Abraham and their family so I will not tell it again.

In the preface to the Selig Goldschmidt book, Selig’s son Meyer described what his childhood was like and how the family was bound in love:5

The ideals of children, grandchildren and the wider family circle were all in tune; thus an incomparable, blissful harmony prevailed in our family. It was constantly sustained by love, affection and enthusiasm for all that is noble and good which emanated from the head of our family. Before meals on Friday evening in winter and on Shabbos evenings after the meal, a large number of the more distant family would assemble in our home. There were so many people that it is difficult to understand, in view of the relatively small size of the rooms, how comfortable and happy everyone felt. It may have been due to a certain simplicity which was deliberately cultivated there. In the main room a big bowl of fruit stood on the table at which we sat, and anyone who wished could help himself.

Imagine if all children were as blessed as the six children of Selig Goldschmidt and Clementine Fuld and able to grow up surrounded by so much joy and love.

This portrait of Selig and Clementine’s children appears on page 37 of the Selig Goldschmidt book. It appears to have been taken in 1872 based on the ages of the children (the daughters are identified by their married names).