As we saw, Meyer Selig was born on October 6, 1865, and married Selma Cramer on March 24, 1889. Their children were born between 1890 and 1896. Meyer Selig was his father’s chief biographer and the one who collected and collated the letters and tributes that became the Selig Goldschmidt book.

Thank you to my cousin Alan Philipp who sent me this photograph of Meyer Selig Goldschmidt.

Meyer and Selma’s oldest son Harry married Fanny Steindecker in Paris on January 21, 1913.1 She was the daughter of David Steindecker and Therese Bing and was born in Paris on December 11, 1891.2 Harry and Fanny had one child, a son Walter Selig Goldschmidt born in Frankfurt on February 3, 1915.3

The next to marry was Meyer’s daughter Clementine. She married Nathan Sondheimer on December 15, 1913, in Frankfurt. He was the son of Moses Tobias Sondheimer and Augusta Ettlinger and was born in Frankfurt on August 27, 1874.

Then tragically Clementine died from the 1918 flu epidemic at the age of 25 on October 29, 1918, leaving those three children—all four years old and younger—without their mother. The rest of Clementine’s family’s story will follow in posts to be published next week.

Alice and Heinrich had six children born between 1920 and 1930. Thank you to my cousin Chaim, a descendant of Alice and Heinrich, who sent me the link for this YouTube video of old home movies of the Eisemann family in Frankfurt. It shows just how comfortable and “normal” their lives were before the Holocaust.

Meyer Selig Goldschmidt died in 1922 and was survived by his wife Selma Cramer Goldschmidt and three of their four children, their daughter Clementine having died in 1918.

Two years after Meyer Selig’s death his younger son Arthur married Martha Mitterhauser Widmer in Berlin on April 25, 1924. Martha was born on April 2, 1896 in Koln, Germany. She had previously been married to Hans Widmer.7 (Martha’s parents are not listed on either marriage record.)

Selma Cramer Goldschmidt and her three surviving children and their spouses and children all survived the Holocaust. Selma escaped to England, though I cannot pin down when. She registered as an enemy alien on December 15, 1939, and was exempted from internment. On the 1939 England and Wales Register, she is listed as living with a servant in London.8 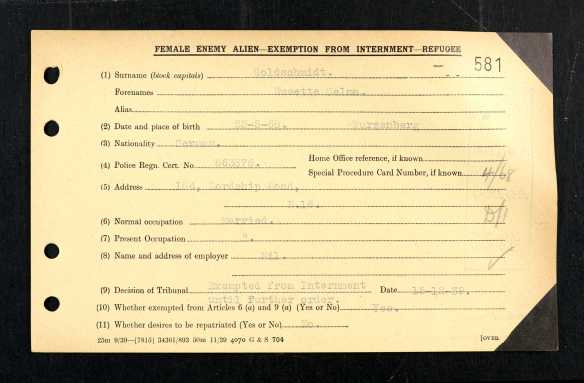 Selma died in the fall of 1955 in London. She was 87.9 (I will have more to say about Selma in a subsequent post about the children of her daughter Clementine Goldschmidt Sondheimer.) She was survived by three of her children—Harry, Arthur, and Alice—and many grandchildren. Their stories will continue in the posts to follow.