As mentioned in an earlier post, Meyer Selig and Selma (Cramer) Goldschmidt’s daughter Clementine married Nathan Sondheimer in 1913 and had three children: Manfred born in 1914, Erich in 1915, and Auguste in 1918. I was very fortunate to connect with Clementine’s granddaughter Daniela, daughter of Manfred Sondheimer, who generously shared with me family stories and photographs, including this wonderful photograph of the three Sondheimer children with their mother.1

Tragically, Clementine died on October 29, 1918, leaving behind three young children, Manfred, (four years old), Erich (three), and Auguste (one), and her husband Nathan Sondheimer. Clementine was only 25 years old and was a victim of the 1918 flu epidemic like her cousin Rosa Cramer Oppenheimer and millions of others. According to Clementine’s granddaughter Daniela, Clementine was pregnant with her fourth child at the time of her death. 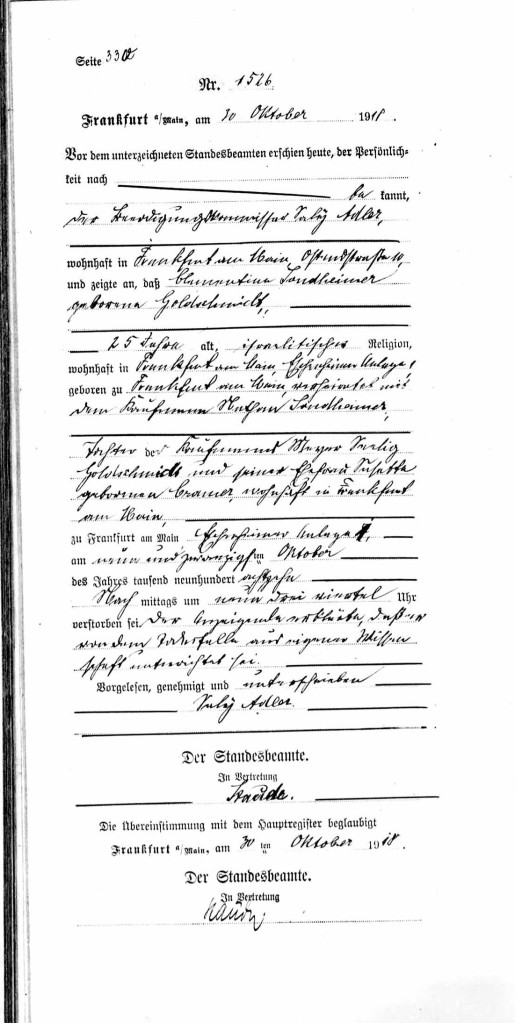 Daniela shared with me that after their mother died, her father Manfred and his siblings were raised in large part by their maternal grandmother, Selma Cramer Goldschmidt, the wife of Meyer Selig Goldschmidt, who himself died in 1922. The entire Goldschmidt extended family was extremely close and lived near each other, so there was a great deal of support for Clementine’s three young children. That was especially important when Auguste came down with tuberculosis and was extremely ill and in and out of sanitoria. Fortunately she eventually recovered and regained her strength.2

Here are three more photographs of the Sondheimer children, two of just the three of them and one with the extended family:

Manfred, Auguste, and Erich Sondheimer, c. 1921 Courtesy of the family

Manfred, Erich, and Auguste Sondheimer, c. 1923 Courtesy of the family

Members of the extended Goldschmidt and Sondheimer families at the North Sea, c. 1927. At far right in the first row is Nathan Sondheimer. To his right is Manfred and then Auguste with Erich behind them. Courtesy of the family

In 1928, ten years after Clementine’s death, her widower Nathan Sondheimer remarried, and he had two more children with his second wife, Anna Ettlinger, a doctor who graduated from the University of Heidelberg, according to my cousin Daniela. Anna was born in Karlsruhe, Germany, on May 28, 1894, to Kaufmann Ettlinger and Dora Frankel.3 She was likely a distant cousin of Nathan through his mother Auguste Ettlinger as both were originally from Karlsruhe, Germany. I traced them both back four generations without finding a direction connection, but I assume there is one there.

Then just five years after he married Anna, Nathan died on May 13, 1933, in Washington, DC. According to his granddaughter Daniela, Nathan had traveled to Washington to promote his business. While there he secured a life insurance policy. Then, without warning, he died suddenly of a heart attack at the age of 54.4

Nathan and Clementine’s three children were now teenaged orphans. Manfred was eighteen, Erich was seventeen, and Auguste was fifteen. Clementine’s children had lost both of their parents before reaching adulthood just as had happened to the children of her cousin Rosa Cramer Oppenheimer. It also left Nathan’s second wife Anna a widow with their two little children, Fritz and Marion, both under the age of five.

Fortunately, Nathan had successfuly secured that life insurance policy just days before his death, and the proceeds proved to be enough to get his body back to Germany for burial in Frankfurt and to get his widow Anna and his five children out of Germany.

According to the website of the Holocaust Museum of Los Angeles, Anna Ettlinger Sondheimer fled Nazi Germany in 1935 and smuggled eighteen sapphires out of the country by sewing them into the clothing of the family. Some of those sapphires are now in the museum’s collection.

It appears that Anna and her two children Fritz and Marion escaped to Holland. A ship manifest shows her sailing to the US with her sister Kate Ettlinger in June 1938; Anna listed her last permanent residence as The Hague, Holland, and indicated she intended to stay in the US permanently.5 Then in September 1938, she sailed from the US to England, listing her last residence as the US.

On February 11, 1939, Anna returned to the US with Fritz and Marion and her mother, who had all been living in Holland. Anna and her children listed as the person they were going to in the US an A. Sondheimer—identified as Anna’s daughter and the sister of her two children, living at 1359 51st Street in Brooklyn, New York. (See the third image below.)

I first assumed that A. Sondheimer was Auguste Sondheimer, who was Anna’s stepdaughter and her children’s half-sister. But I found two manifests—one an outgoing manifest from England, the other an arrival manifest in New York—showing that Auguste sailed from England to New York in August 1939, six months after Anna’s arrival back to the US in February. Auguste was  accompanied by  Selma Sondheimer, who was the widow of Fritz Sondheimer, Nathan Sondheimer’s brother. Both of those manifests show that Auguste had been living in England, not in Brooklyn. They also reveal that Auguste was a photographer.6

I searched for any other A. Sondheimer who could have been living in Brooklyn at that time. Nathan did have two brothers who came to the US. One, Arthur, had died in New York in 1905;7 the other, Albert, arrived in the US in April 1939, so months after Anna’s arrival.8

And then the lightbulb went on. The “A. Sondheimer” they were going to in Brooklyn was Anna Ettlinger Sondheimer herself. Anna listed her last residence as Brooklyn on that February 1939 manifest. The poor shipping company clerk who entered the data must have been so confused. Look at how he crossed out the relationships in the first column for the person left behind, another A. Sondheimer, this one probably Albert Sondheimer, Nathan’s brother. And he also listed the A. Sondheimer they were going to as the daughter of both Anna’s mother and of Anna herself.

In any event, the 1940 US census shows that Augusta (spelled here with a A at the end, not an E) was then living in New York City with Anna, Fritz, Marion, Anna’s mother Dora Rudlia Frankel Ettlinger, and Anna’s sister-in-law Selma Ettlinger Sondheimer, the widow of Nathan’s brother Fritz and Nathan’s first cousin. Anna was practicing medicine.

Auguste married Walter James Levy in New York in April, 1942.9 Walter was also a refugee from Germany; he was born in Hamburg on March 21, 1911, to Moses Levy and Bertha Lindenberger.10 Walter arrived in the US on March 19, 1941, and filed his declaration of intention to become a US citizen on August 6, 1941, listing his occupation as statistician and his last residence as England.11 He also by that time had registered for the World War II draft, listing his occupation as writer, statistician, economist. Most interestingly, he listed as his contact person a “friend,” Augusta Sondheimer. They were both living at 41 Central Park West in New York City. Less than a year later, they were married.

During the war, they moved to Washington, DC, where Walter ran the petroleum section of the Office of Strategic Services, the forerunner of the Central Intelligence Agency. According to Walter’s obituary in The New York Times:

After the war, he guided the petroleum sector of the Marshall Plan. In 1948 he became chief of the petroleum, oil and lubricant division of the Economic Cooperation Administration, which administered the plan to mend Europe’s shattered economies and provide the political stability for democratic institutions to thrive. He filled that job until 1949 and continued to advise the E.C.A. until it ended its mission two years later.

During the 1940s, Walter and Augusta (as she later spelled it in the US) had two children, Robert and Susan. They returned to New York where Walter established his own international consulting business, Walter J. Levy Consultants Corporation, where he “helped renegotiate oil leases between states that wanted to tap their own resources effectively and companies that feared outright nationalization.”12

Augusta Sondheimer Levy died on September 19, 1981, in Westport, Connecticut; she was 64 years old.13 Her son Robert died only twelve years later on April 20, 1993; he was only 47.14 Walter Levy died at age 86 on December 10, 1997, in New York; he was described as “the dean of United States oil economists” in his obituaries.15 Sadly, Augusta and Walter’s remaining child also died relatively young; Susan Levy died on November 15, 2003, Altamonte Springs, California; she was 54.16 All four family members are buried at the Riverside Cemetery in Saddle Brook, New Jersey, where many other Sondheimer relatives are also buried. As neither Robert or Susan had children, there are no living descendants of Augusta Sondheimer Levy.

But Augusta survived the loss of her mother, her father, and then her homeland. Her name and her story should not be forgotten.

What about Augusta’s older brothers, Manfred and Erich?

18 thoughts on “Children Orphaned by the 1918 Flu Epidemic: The Family of Clementine Goldschmidt Sondheimer, Part I”