We saw that the family of Sarah Goldschmidt and Salomon Stern’s daughter Keile Stern Loewenthal experienced much growth and prosperity during the 1910s and 1920s. This post will focus on their two sons, Abraham and Mayer, and their lives between 1910 and 1930.

As of 1910, Abraham (known as Adolf) Stern and his wife and first cousin Johanna Goldschmidt had four grown children: Siegfried, Clementine, Sittah Sarah, and Alice. I am so grateful to Siegfried’s grandson Rafi Stern, my fifth cousin, who kindly shared the photographs that appear in this post.

This photograph shows the house where Abraham and Johanna lived and raised their children in Frankfurt. As you can see, the family was quite comfortably situated as Abraham was a successful merchant in Frankfurt. 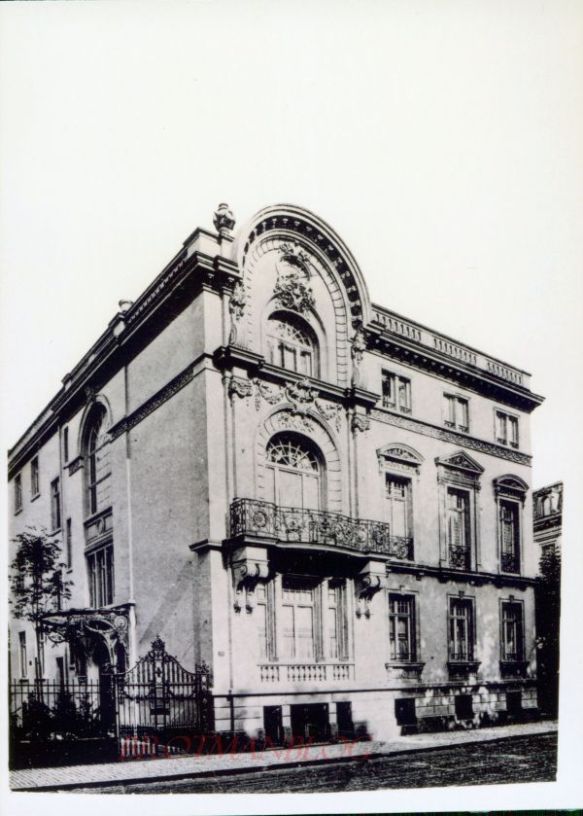 Home of Abraham Adolf Stern and Johanna Goldschmidt in Frankfurt. Courtesy of their great-grandson, Rafi Stern. 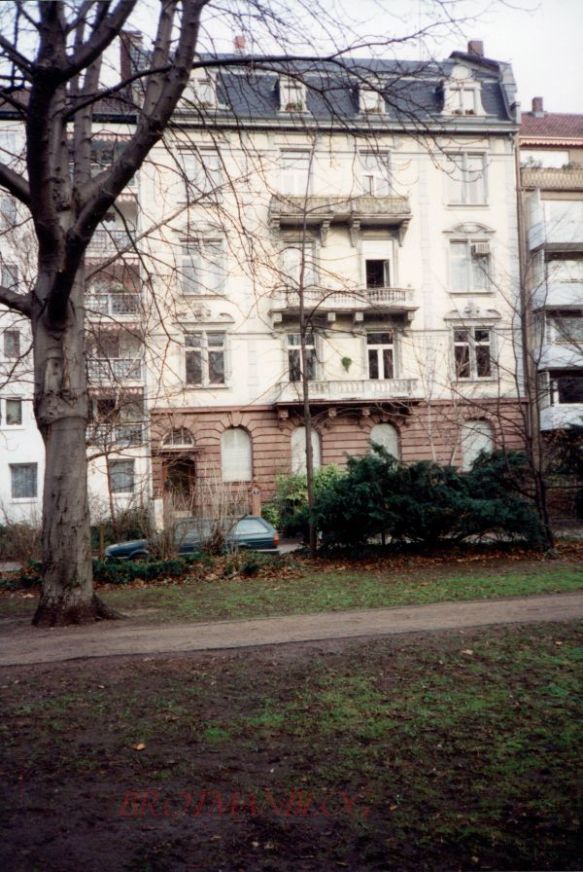 Home of Siegfried Stern as it looks today. Courtesy of his grandson, Rafi Stern.

Clementine’s sister Sittah Sarah Stern married Abraham Albert Mainz on October 3, 1911, in Mainz. He was born in Paris, France, on May 31, 1883, to Leopold Mainz and Hermine Straus.

Abraham and Johanna would lose their two oldest children in the next several years. First, Clementine Stern Oppenheimer died on January 18, 1919, in Frankfurt. She was only 29 years old and left behind three young children, Erika (ten), William Erwin (seven), and Sarah Gabriele (two). Like millions of others, Clementine died from the Spanish flu epidemic, according to her great-nephew, my cousin Rafi.

A year later, as so often happened in Jewish families back then, Clementine’s younger sister Alice Lea Stern married Clementine’s widower Siegfried Oppenheimer. They were married on October 6, 1920, in Frankfurt.

Alice and Siegfried would have five children together in the 1920s.

Just two years after losing Clementine, Abraham and Johanna lost their first born, Siegfried Stern. He died on July 9, 1921, in Oberursel, Germany. He was only 32.  He died at the Frankfurter Kuranstalt Hohemark, a psychiatric hospital.  According to his grandson Rafi, Siegfried had suffered a business failure and become despondent. He was hospitalized and tragically took his own life. He left behind his wife Lea and their two young children Erich (eight) and Gunther (five).

Below is Siegfried’s gravestone, one of the most beautiful I’ve ever seen, and the inscription is heartbreaking to read, knowing Siegfried’s story. I am grateful to the members of Tracing the Tribe for this partial translation:

Here lies buried Mr. Shlomo son in Mr. Asher Avraham STERN “shlita” (indicates that his father was alive at the time of the sons death).
A man who feared G-d, he revived the hearts of the downtrodden in secret.

He was pure in his thoughts and pure in his body, and all his purpose was the returning of his soul, pure, to his maker.

He respected his father and his mother with all of his ability.

He respected his wife more than his own body.

He died with a good name at the age of 32 to the sorrow of all that knew him, on the holy day of Shabbos, 3 Tamuz, and was buried with crying and eulogies on Monday the 5th of the same month. (5)681 (according to the small count) (1921).
May his soul be bound in the bonds of life.

Gravestone of Siegfried Stern, courtesy of his grandson Rafi Stern.

Siegfried’s widow Lea remarried a few years after Siegfried’s death and would have two more children with her second husband, Ernst Sigmund Schwarzschhild.9

Not long after losing his children Siegfried and Clementine, Abraham Adolf Stern himself passed away. He died on December 29, 1925, at the age of 67. He was survived by his wife/cousin Johanna and his two remaining children, Sittah Sarah and Alice Lea, and his grandchildren.

The kind people at Tracing the Tribe translated Abraham’s gravestone for me:

Here is buried
Asher Avraham son of Shlomo called Adolf Albert Stern
a great man and a leader of his people
complete in his deeds and of good discernment.
The beginning of his wisdom comes from his belief in God

He oversaw his children and descendants

His house was a house of the righteous and a dwelling place of Torah
His soul is entwined in that of his humble wife.
You are gone and caused the middle of the day to turn dark. From heaven you are alive with us.

May his soul be bound in the bond of life.

Abraham’s brother Mayer Stern and his wife Gella Hirsch had two children born in the 1890s, Elsa and Markus. Elsa married Jacob Alfred Schwarzschild on January 22, 1911, in Frankfurt. Jacob was the son of Alfred Isaac Schwarzchild and Recha Goldschmidt and was born February 12, 1885 in Frankfurt.  Jacob was Elsa’s second cousin. His mother Recha was the daughter of Selig Goldschmidt, and Elsa’s father Mayer was the son of Sarah Goldschmidt, Selig’s older sister. Once again, the family tree was bending around itself.

Elsa and Jacob had one child, Elizabeth, reportedly born July 26, 1915, in Frankfurt.10

Elsa’s marriage to Jacob did not last, despite the cousin relationship. The marginal comment on their marriage record attests to their divorce. Thank you to the members of the German Genealogy group who provided the translation of this comment: 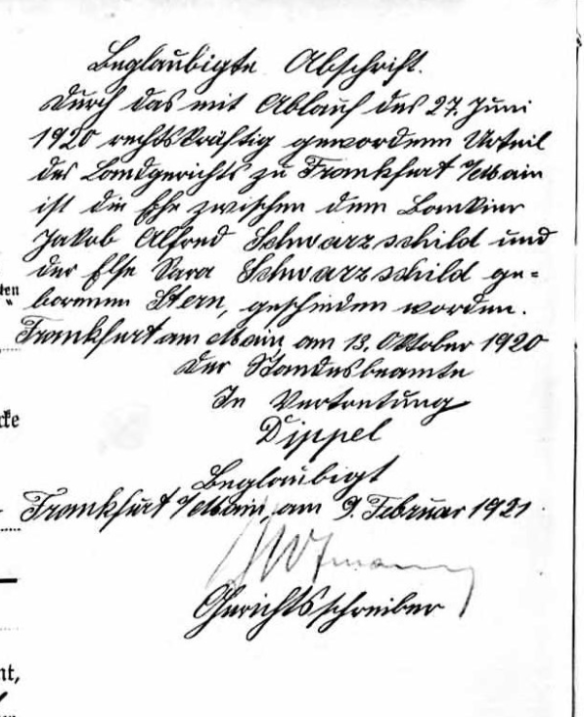 On August 18, 1920, just months after the divorce became final, Elsa Stern Schwarzschild married Alfred Hirsch.  Alfred was born in Hamburg to Esaias Hirsch and Charlotte Wolf on May 19, 1890.  Together, Alfred and Elsa had three children born in the 1920s.11 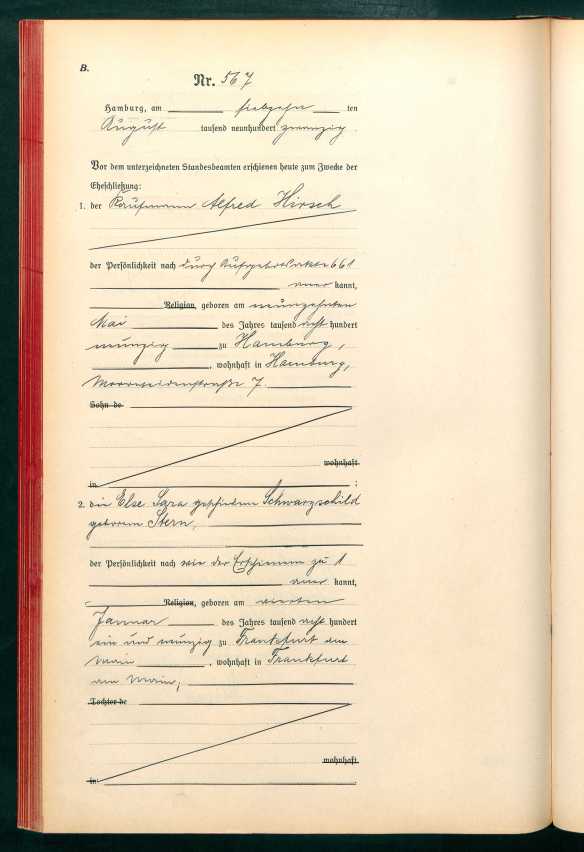 Thus, as the family approached the 1930s, Sarah Goldschmidt’s surviving descendants were living comfortable lives, but had suffered a number of terrible losses between 1910 and 1930, including two of Sarah’s children, Keile and Abraham, and three of her grandchildren, Abraham’s children Clementine Stern Oppenheimer and Siegfried Stern, and Keile’s daughter Martha Loewenthal Wolff.

But Lina and Mayer were still living as of 1930 as were eight of Sarah’s grandchildren. All of them would see their comfortable and prosperous lives as German Jews upturned by the rise of Nazism in the coming decade.