Before the dawn of the 20th century, Keile had herself become a grandmother. Her daughter Selma Loewenthal married Nathan Schwabacher on August 1, 1890, in Bornheim. He was born on December 30, 1860, in Feuchtwangen, Germany, to Elias Baer Schwabacher and Jette Gutmann. Notice that Levi Brinkmann, husband of Selma’s aunt Lina, was one of the witnesses.

Their third child Gerhard Schwabacher was actually born in the 20th century. He was born in Frankfurt on June 27, 1902.1

Keile and Abraham Loewenthal’s second oldest daughter Helene also married in the 1890s. She married Eduard Feuchtwanger on April 4, 1897, in Frankfurt. He was the son of Jacob Loew Feuchtwanger and Auguste Hahn, and was born in Munich on April 21, 1862. Keile’s brother Abraham Stern was a witness to this marriage.

But the happiness brought by the marriages of Keile’s daughters Selma and Helene and the births of her grandchildren between 1891 and 1902 was unfortunately darkened by the death of her husband Abraham Loewenthal on January 28, 1903. He was sixty years old.

The first decade of the 20th century brought one other loss to the family when Lina’s husband Levi Brinkmann died on September 14, 1907, in Eschwege, Germany. He was only 65.

Thus, both Keile and her sister Lina were widowed during that decade.

But that first decade also brought new members into the family as more of the grandchildren of Sarah Goldschmidt Stern began to marry and have children. First, Julius Loewenthal, Keile’s son, married Elsa Werner on November 16, 1903, in Eschwege, Germany. Elsa was the daughter of Max Werner and Helene Katzenstein, and she was born on June 27, 1883, in Eschwege.

UPDATE: Thank you to David Baron for pointing out that Elsa Werner was a second cousin to Julius Loewenthal. Her mother Helene Katzenstein Werner was the daughter of Malchen Goldschmidt Katzenstein, younger sister of Sarah Goldschmidt Stern. Thus, Julius and Elsa were both the great-grandchildren of Meyer Goldschmidt. 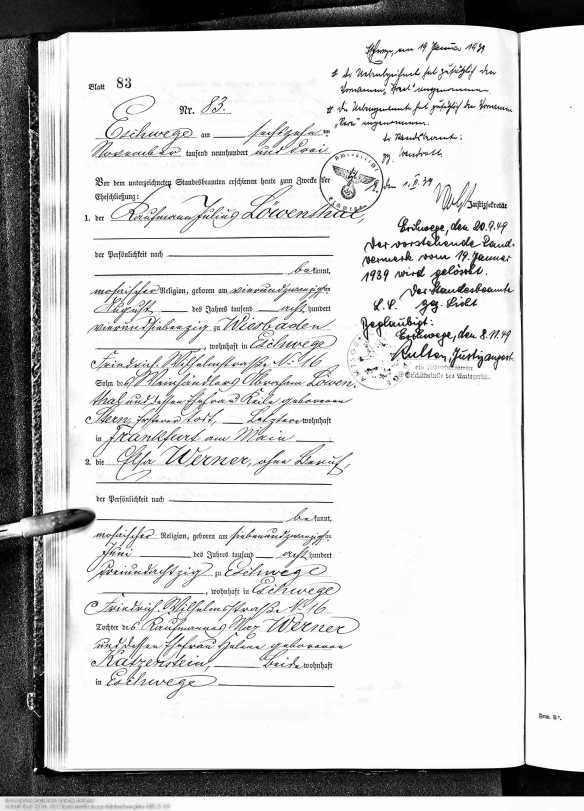 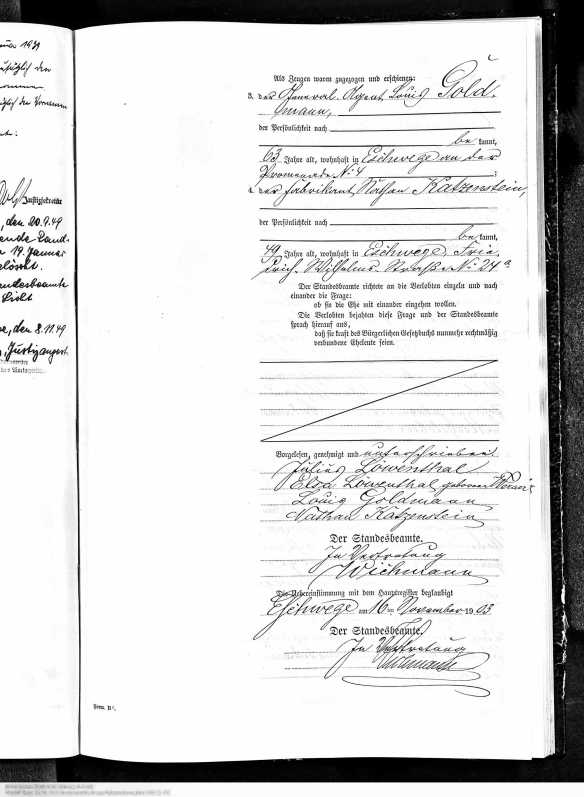 Keile and Abraham Loewenthal’s daughter Martha also married in this decade. On November 8, 1904, she married Jakob Abraham Wolff, son of Abraham Wolff and Hannchen Wolff, in Frankfurt. Jakob was born in Aurich, Germany, on December 20, 1875. Keile’s brother Abraham Stern was once again a witness to this marriage. 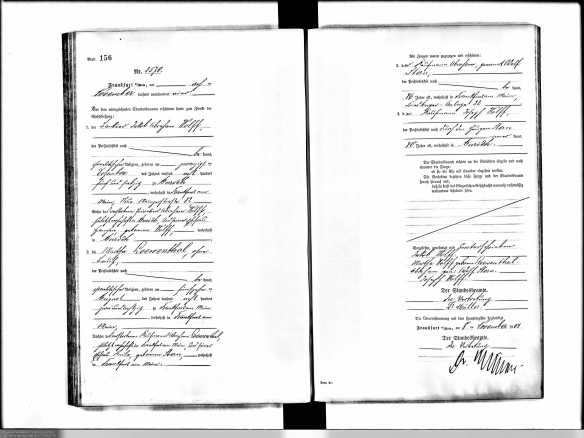 Martha’s brother Siegfried Loewenthal also married in this decade. Siegfried married Henriette Feuchtwanger, daughter of Amson Feuchtwanger and Roeschen Oppenheimer, sometime before 1908. Henriette was born in Furth on October 13, 1881.6  Siegfried and Henriette had three children born between their marriage and 1910: Rosel on February 14, 1908,7 Albert on March 25, 1909,8 and Louise on December 25, 1910,9 all in Frankfurt. They would have two more children in the next decade.

UPDATE: Thank you to my cousin Carrie for sharing this photograph of her great-great-grandmother, Kiele Stern Loewenthal.

Keile was not the only child of Sarah Goldschmidt Stern to have grandchildren in the first decade of the 20th century. On April 14, 1909, Abraham Stern’s daughter Clementine married Siegfried Oppenheimer in Frankfurt. He was born in Hannover on October 16, 1882, the son of Wilhelm Oppenheimer and Jettchen Cramer. He was a physician. 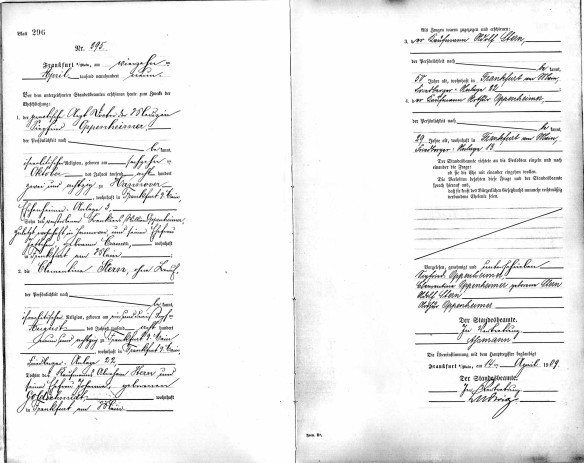 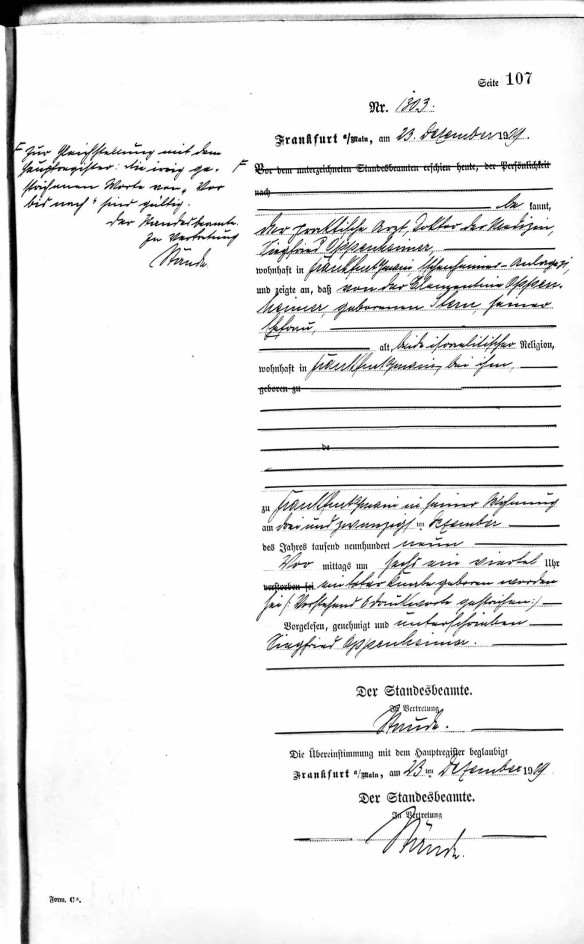 Clementine and Siegfried would have more children in the next decade, as would Clementine’s siblings and her first cousins. But with the growth of the family tree during the twenty years that followed Sarah Goldschmidt’s death in 1889, it’s time to focus on each of her children and their children and grandchildren separately as we move forward into the 1910s and beyond.