Abraham and Johanna (Goldschmidt) Stern’s daughter Clementine had died in 1919 during the 1918 flu epidemic, survived by her husband Siegfried Oppenheimer and three children: Erika (1909), William Erwin (1912), and Sarah Gabriele (1917). After Clementine’s death, Siegfried married her younger sister Alice Lea, with whom he had five more children, all born in the 1920s. All eight of those children as well as Alice and Siegfried themselves escaped from Germany in the 1930s.

The Children of Clementine Stern and Siegfried Oppenheimer

Siegfried and Clementine’s oldest child, Erika Oppenheimer, first escaped to the Netherlands in 1933, but she immigrated to the United States on July 4, 1938, appropriately enough. Two weeks later she married Paul Fromm in Chicago, Illinois, on July 20, 1938. Paul also had arrived on July 4, 1938, so the two may have met and fallen in love on the ship that brought them to the US. Paul was born in Kitzingen, Germany, on September 28, 1906, into a family with a long tradition as vintners. He had been living in Bingen, Germany, before immigrating. Erika and Paul both filed their naturalization papers on August 26, 1938, less than two months after their arrival. 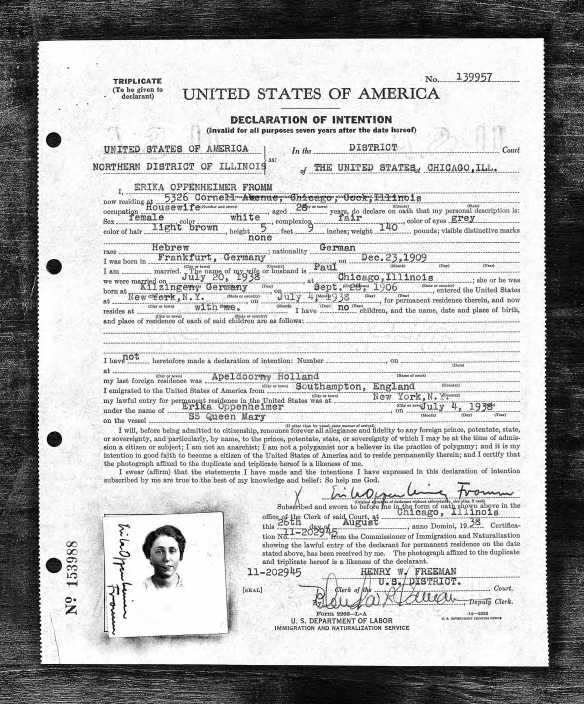 The 1940 census reports them living in Chicago, where Paul was the proprietor of a wholesale liquor importation business and Erika a psychologist working in a hospital clinic.1 They would have one child born in 1940.

Both Paul and Erika achieved great success in the US. Paul was a very successful wine merchant, but also made his name as a philanthropist who generously supported the arts, music specifically. He created the Fromm Foundation at Harvard to support musicians and composers and musical events such as Tanglewood and the Aspen Music Festival. John Rockwell, the long-time music critic for the New York Times, described Paul Fromm as “the most active and distinguished private patron of contemporary classical music in the United States.” Paul died on the 49th anniversary of his arrival in the US, July 4, 1987.  He was eighty years old.2

Dr. Fromm considered hypnosis a valuable analytical tool that, when used by a skilled practitioner, could provide access to a patient’s unconscious conflicts and desires. She said hypnosis could induce an altered state of consciousness involving heightened awareness and focus in approximately 1 in 12 people.

She used hypnosis to treat severely disturbed patients as well as victims of incest and those suffering from post-traumatic stress disorders. She also advocated self-hypnosis as a path to self-exploration.

In the 1980’s, Dr. Fromm joined the growing field of behavioral medicine, which uses hypnosis, meditation, biofeedback and other techniques to treat physical ailments. Her book ”Hypnosis and Behavioral Medicine,” written with Dr. Daniel P. Brown and published in 1987, presented research supporting those methods in treating allergies, asthma, migraines and hypertension.

Clementine and Siegfried’s son William Erwin Oppenheimer (often called Erwin) left Germany very early; he arrived in Palestine on November 8, 1933, less than a year after Hitler was elected Chancellor of Germany. By 1938, when he applied for Palestinian citizenship, he was married to Hannie Halpern, who was also a refugee from Germany. She was born in Frankfurt on September 1, 1914. Erwin was then working as a farmer near Rehovoth.5 According to trees on MyHeritage, he died on April 22, 1963, in Jerusalem. He was only fifty years old.

As for Clementine and Siegfried’s younger daughter Sarah Gabriele Oppenheimer, known as Gabriele, I am missing some pieces to Gabriele’s story, but it appears from documents that she had been married to a man named Leon Schindel, whom she divorced in Jerusalem on July 28, 1941.6

Among Gabriele’s immigration documents is her original Palestinian passport, issued on December 2, 1937, so she was already a citizen of Palestine by then. She was a professional photographer, according to her passport. 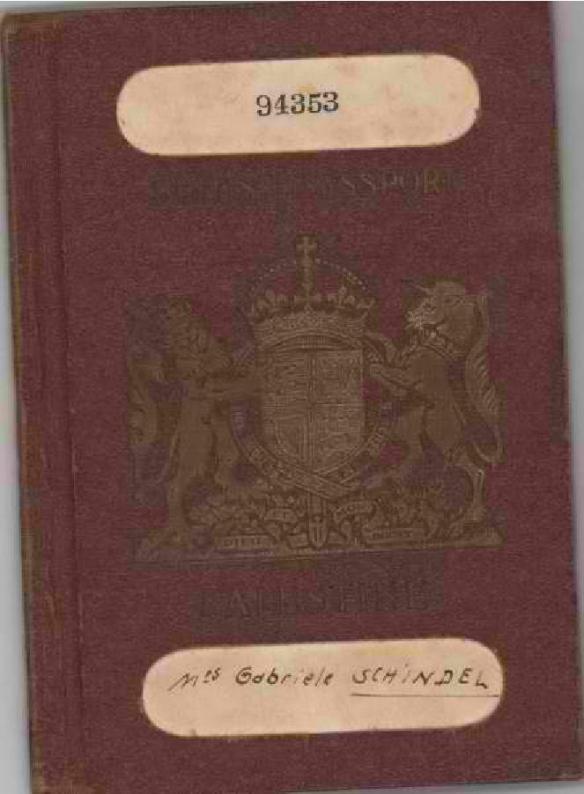 She married a second time in Tel Aviv on September 11, 1942, to Martin Lederman; he was born in Dresden, Germany, on April 13, 1904, and had immigrated to Palestine on March 26, 1940; he had previously been living in Panama. According to his Palestinian naturalization papers, Martin was a publisher.7 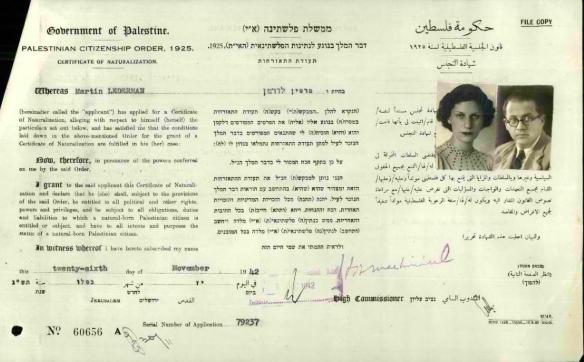 Martin and Gabriele did not remain in Palestine, later Israel, for too long after the war ended.  They made several trips to England and the US after the war, and in June 1949, they indicated on the ship manifest taking them from England to the US that their intended future permanent residence was the “USA.”8  Gabriele became a naturalized US citizen on December 20, 1954,9 and Martin on February 14, 1955.10 They were residing in New York City.

I don’t have many documents for what happened to Alice and Siegfried Oppenheimer before they arrived in Palestine in late 1938. But as we saw in my last post, a letter written by Erich Stern, Siegfried Stern’s son, to his brother Gunther Stern in 1938 on November 13, 1938, revealed that Siegfried Oppenheimer was arrested in the aftermath of Kristallnacht just days before his family planned to travel to Palestine.

But eventually Siegfried and Alice and all five of their children made it to Palestine. Alice and Siegfried Oppenheimer arrived with three youngest of those children, and their two oldest children arrived separately around the same time.13 They all became naturalized citizens of Palestine in 1941. 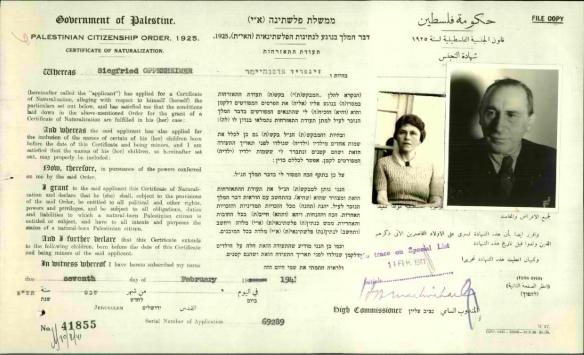 I do not have death records for Alice or Siegfried, but the research of Cibella/Baron indicates that both died in Israel, Siegfried in 1959, Alice in 1986. All but one of their five children also lived the rest of their lives in Israel; the other child immigrated to the US after the war.

Thus, of the eight children of Clementine and Alice Stern, six ended up in Israel, two in the United States. Clementine, Alice, and Siegfried Oppenheimer have many descendants living in both countries. What Germany lost—e.g., a brilliant psychologist, a philanthropist and entrepreneur, and a photographer–were gifts to the countries that took them in.