See if you detect a pattern among the children of William Sigmund and Adelaide Newmeyer.

As we move forward from 1920, it makes sense to look at each of Ella and Albert’s children separately since their own children, Ella and Albert’s grandchildren, were now adults and having families of their own. I will start with Ella and Albert’s oldest child William Sigmund, who had died in 1887, and whose widow Adelaide and their five surviving children were all living in Washington, DC, in 1920, as we saw here.

William’s widow Adelaide died on July 7, 1922, in DC. She was 71 and had been a widow for twenty-five years. She had never remarried after William died, and she had raised her five children on her own thereafter. Since her children had ranged in age when William died from thirteen-year-old Albert down to one-year old Howard, that was no small task for Adelaide. She must have been a very strong woman. And her children appeared to remain close many years after she died, as seen in numerous social items in the Washington papers over the years detailing the many events and trips the family members attended together.

Albert remarried seven years later. His second wife was Helen Schiff. She was 40 when she married Albert on October 21, 1939; he was 65. Helen was born January 23, 1899, in Charlotte, North Carolina, to Louis Schiff and Carrie Rosenthal. She grew up there and was still living there with her parents in 1930; her father was an electrical supplies salesman.3 In 1940, she and Albert were living in DC, where Albert continued to run his jewelry store.4 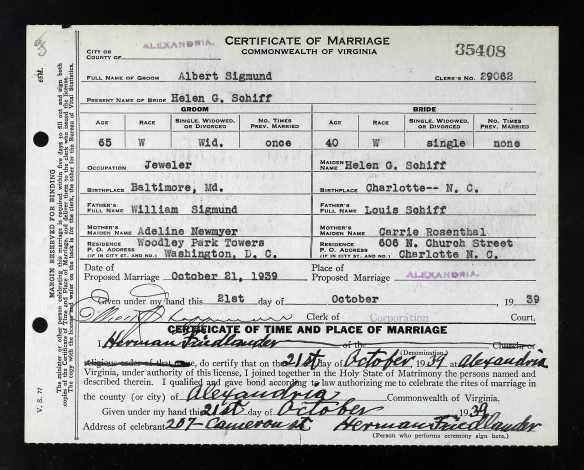 Unfortunately, Helen’s marriage to Albert only lasted three years as Albert died on May 3, 1942. 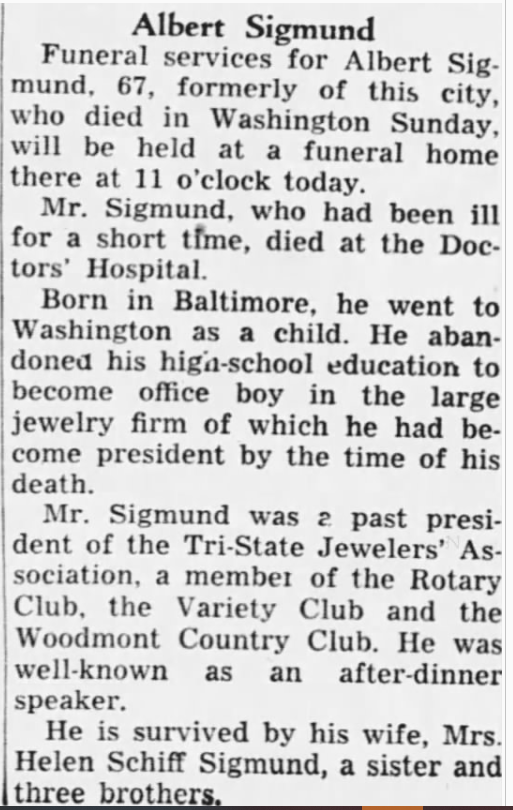 Albert’s brother Abe, William and Adelaide’s second child, continued to work in the women’s clothing business in the 1920s. In 1930 he and his wife Helene and their daughter Marjorie were living together in DC.6

Marjorie married Abner Bernard Levin on March 29, 1937.7 He was born in Fitzgerald, Georgia, on June 23, 1910, the son of Israel Levin and Sarah Line, and had grown up in Roanoke, Virginia, where his father was the manager of a leather company. 8 Bernard, as he was known, graduated from Washington & Lee University and the University of Georgia Law School. 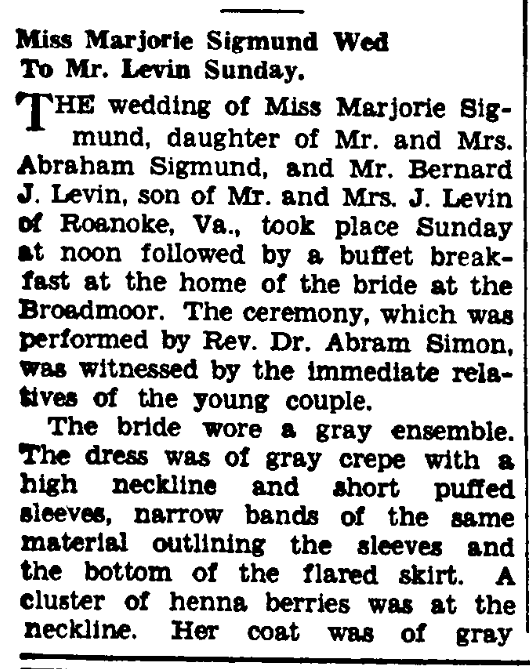 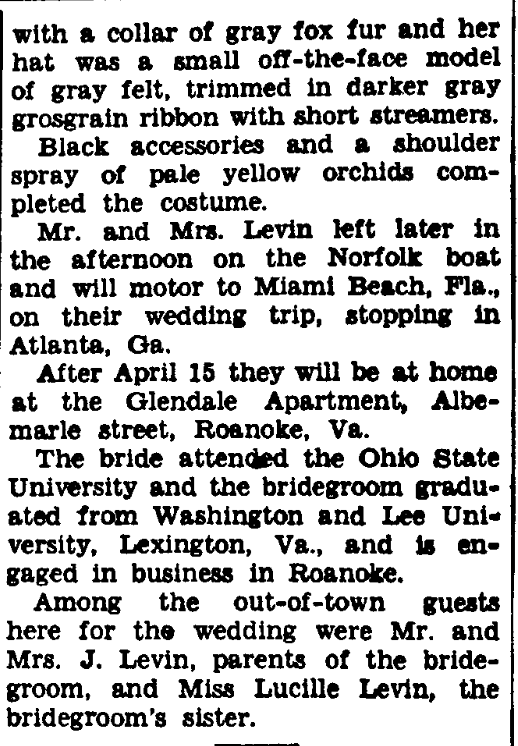 After marrying, Bernard and Marjorie settled in Roanoke, where in 1940 Bernard was working for the Shoemakers Supply Company. They would have two children.9

Marjorie’s parents Abe and Helene were still living in DC in 1940 where Abe continued to own his store,10 but not long afterwards they must have moved to Roanoke to be near their only child Marjorie and her family. Abe died from pneumonia in Virginia on September 25, 1944; he was 68 years old. According to his death certificate, he was residing in Roanoke at that time and had been there for eighteen months. 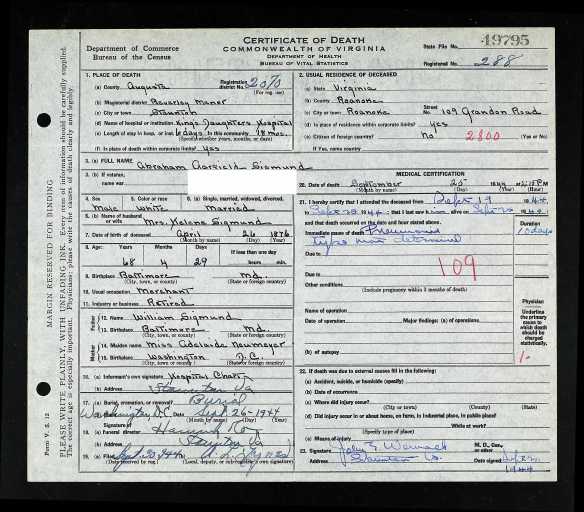 Abe’s widow Helen survived him for only a year. She died at age 65 on October 14, 1945 from a coronary occlusion, arteriosclerosis, and hypertension.11

Jeannette Sigmund Kaufman, William and Adelaide’s only daughter and third child, also continued to live in Washington, DC, during the 1920s and 1930s, where her husband Sydney Kaufman was a clothing merchant.14

Their daughter Virginia married Edward Furman in Washington on June 10, 1931.15 He was born in Philadelphia on January 1, 1908.16  In 1930 he was living with his parents Samuel and Esther Furman in Philadelphia; Edward was not employed.17 After marrying, Edward and Virginia were living in DC where Edward was an insurance salesman.18 They would have one child born in the 1930s and one born in the 1940s.

Then Edward’s life was cut short. He was only 32 when he died on January 21, 1944. I could not locate any explanation of his death, just a short death notice and his grave on FindAGrave. His children were only seven and two years old when they lost their father.19

I could not find much more about Jeannette, Sydney or Virginia. I couldn’t even find Sydney and Jeannette on the 1940 census. Jeanette died on January 21, 1961, in Bethesda, Maryland,20 and Sydney died eleven years later in December 1972.21 I could not locate any information as to Virginia’s death.

That brings us to William and Adelaide’s fourth child, Goldsmith Sigmund.  He and his wife Sadye and their son William continued to live in DC, where Goldie was a merchant. In 1930 he and his son were both working in his department store.22 Eventually Goldie closed his business and went to work for other stores, as seen in this ad. As we will see, the Mr. Casillo mentioned in the ad was married to Goldie’s niece, Audrey Sigmund, daughter of Howard Sigmund.

Goldie’s son William married Marjorie Hertzberg on February 2, 1934.23 She was the daughter of Julius Hertzberg and Caroline Hollander and was born in DC on March 24, 1912. Her mother was also a DC native, and her father was born in Germany and was a buyer of dry goods, according to the 1930 census.24 William and Marjorie would have two children.

In 1940, Goldie and Sadye were still living in DC, and Goldie continued to work in the clothing business.25 His son William and his family also lived in DC, and William was now the vice-president of an advertising agency there.26

Goldsmith Sigmund remarried; his second wife was Dorothy Daniels.28 Goldsmith died in February 1958 when he was 85. He was survived by Dorothy, his son William,  and two grandchildren. 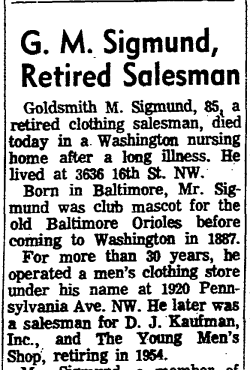 William F. Sigmund died from a stroke on November 7, 1982; he was 72. The Washington Times reported on his death. The obituary reported that he had been the managing partner of Henry J. Kaufman & Associates, a Washingon advertising firm, for 26 years and that he had previously been in the advertising department of The Washington Post. In addition, he was reported to be active in civic affairs, a devoted sports fan, and a prolific artist. He was survived by his children and grandchildren. 29

Have you noticed the strange pattern so far among the four oldest children of William and Adelaide Sigmund? Albert had no children, and Abe, Jeannette, and Goldsmith each had only one child. I wonder why so many of them had just one child. Could it be because they lost their own father at such a young age? Certainly it was unusual for those times when so many people had such large families.

Howard, William and Adelaide’s youngest child, broke the pattern, but not by much.  His story and that of his children merit a separate post.

19 thoughts on “William Sigmund’s Children: What Pattern Do You See?”