Marcel (born Mayer) Goldschmidt, the fourth child of Jacob Meier Goldschmidt and Jettchen Cahn, died in 1928 and was survived by his wife and first cousin, Hedwig Goldschmidt, and their four children, Jacob, Nelly, Else, and Grete. Hedwig and two of those children, Jacob and Grete, would survive the Holocaust. Nelly and Else were not as fortunate. This post will tell the story of Hedwig and the two children who escaped.

Grete and her husband Berthold Heimerdinger and their daughter Gabrielle were the first to leave Germany. They arrived in New York on June 22, 1934, and were going to Berthold’s brother Leonard Heimerdinger in New York City.

Two months later Berthold declared his intention to become a US citizen.  He was working as a securities dealer at that time, and the family was residing at 1212 Fifth Avenue in New York City.

Grete’s mother Hedwig came to visit them in New York in April, 1935, for a four month stay, listing her son Jacob as the person to contact back in Frankfurt,1 but Hedwig returned to Germany after her visit. She returned for another visit two years later on October 29, 1937, but this time listed her residence as Zurich, Switzerland, where her contact person was a friend named Julius Wolf.2

Sometime thereafter Hedwig must have left Switzerland because when she arrived in England on March 18, 1938, she listed her last address as Amsterdam.3 I don’t know where she was during World War II. More on that in a later post. By 1952, she was living in the United States.

In 1940, Grete, Berthold, and Gabrielle Heimerdinger were living in Queens, New York, and Berthold was working as a jewelry dealer.4 According to Berthold’s draft registration for World War II, he was self-employed. 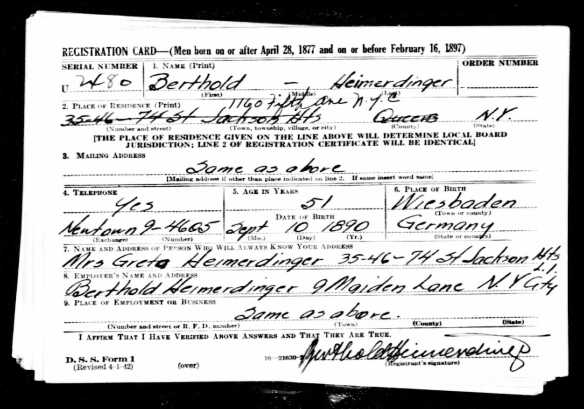 Grete’s brother Jacob arrived in New York on August 30, 1941, from Lisbon, Portugal, with his last residence being Nice, France. On his declaration of intention to become a US citizen, Jacob listed his occupation as an art dealer, like so many of his extended family members from Frankfurt. 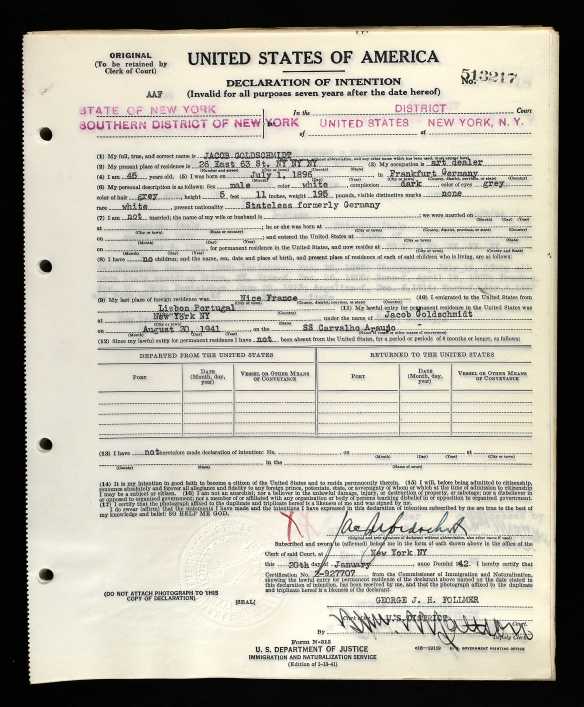 Thus, Jacob was living with his cousins, not his sister Grete. Jacob did not list an occupation on his draft registration, but listed his place of business as the same address as his (and his cousins’) residence, 26 East 63rd Street. (Note also that on the naturalization index card for his mother Hedwig above, she also listed 26 East 63rd Street as her address in 1952.) 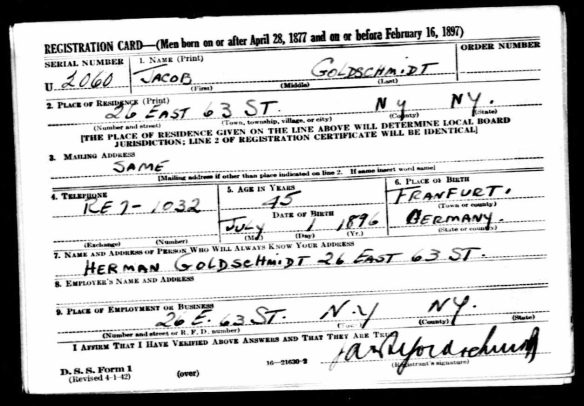 Jacob had reported on his declaration of intent that he was not married and had no children. However, David Baron and Roger Cibella’s research reported that Jacob married in France on June 20, 1940, and thereafter had two children born in France, one in December 1941 and one in 1952. Although I have no documentation of the marriage or the births of the children, I did find airline documents showing that the wife and two children visited Jacob in New York City during the 1950s.[^5] By 1964, Jacob had relocated to France, presumably to be closer to his family.5

Gabrielle Heimerdinger, Grete and Berthold’s daughter, married Erwin Vogel on September 8, 1943, in New York City.6 Erwin was born in Frankfurt, Germany, on June 23, 1921, to Kurt and Edith Vogel, and had immigrated to the US with his family in 1937, coming from Antwerp, Belgium. They settled in Chicago, where they were living in 1940.7

On his 1942 draft registration for World War II, Erwin was living in Hoboken, New Jersey, and working for the Stevens Institute of Technology, from which he received a master’s degree in mechanical engineering in 1944. Gabrielle and Erwin had four children.8

Thus, Hedwig and her son Jacob and her daughter Grete and Grete’s family all survived the Holocaust. Grete’s husband Berthold Heimerdinger died in June 1961 at the age of 71.9 Hedwig died on December 9, 1964; she was 87.10 Jacob Goldschmidt died in October 1976 in France. He was eighty years old.11

Grete was the last surviving child of Marcel and Hedwig Goldschmidt. She lived a long life, dying on January 2, 2003, in New York at the age of 98.12 She had outlived her daughter Gabrielle Heimerdinger Vogel, who died January 19, 1990, in Rockville, Maryland, where she and her family had relocated in 1972.13 Gabrielle was 65 and was survived by her husband Erwin and their four children.

Grete and Jacob were fortunate to have left Germany when they did. The other two siblings, Else and Nelly, faced tragic deaths at the hands of the Nazis, as we will see in my next post.

17 thoughts on “Marcel Goldschmidt’s Children: The Two Who Survived”