Imagine being able to read the testimony your ancestor gave in a case back in 1831. Thanks to Teresa of the Writing My Past blog, I found a case where my three-times great-grandfather Hart Levy Cohen was a critical eyewitness to a crime.

Teresa wrote on her blog about the Proceedings of Old Bailey Online Project. As described on the project website, “The Proceedings of the Old Bailey, 1674-1913 [is a] fully searchable edition of the largest body of texts detailing the lives of non-elite people ever published, containing 197,745 criminal trials held at London’s central criminal court.”1 Teresa had found a number of interesting cases involving her English ancestors, and on a lark, I decided to search to see if I could find any references to my Cohen relatives who lived in London from about 1800 until 1851.

Lo and behold, I found one case—an 1831 case in which Hart Cohen was a witness, not the defendant or the victim, fortunately.2  The case involved an alleged theft of money from a man named Michael Hart by a man named Isaac Isaacs. As described in the testimony recorded in the transcript of the trial, Michael Hart was a recent immigrant to England from Amsterdam and was courting Isaac Isaacs’ sister. According to Michael Hart, Isaacs grabbed Dutch notes worth 500 guilders from his hand and ran off with the money.

My three-times great-grandparents were present in the room when Isaacs took Michael Hart’s money, and Hart Cohen testified to the fact that he saw Isaacs snatch the notes. One witness, Mary Isaac (not a relative of the accused) testified that Michael Hart willingly gave the money to Isaacs. But the court found Isaacs guilty and sentenced him to “transportation for life,” meaning he was permanently exiled from England. I don’t know where Isaacs ended up, nor do I know where Michael Hart ended up.

UPDATE: Thank you to Teresa for pointing me to this site, which reveals that Isaac Isaacs was shipped of to what was then Van Diemen’s Island, now known as Tasmania. https://www.digitalpanopticon.org/life?id=obpt18311020-149-defend1043

In the testimony, Isaac Isaacs is referred to as “the prisoner” and Michael Hart is referred to either as “the prosecutor” or by his surname Hart. In the brief excerpt from the transcript below, I have added “the prosecutor” to any references to Michael Hart to prevent any confusion with my 3x-great-grandfather Hart Cohen. I also have highlighted a few relevant portions that I comment on below.

MICHAEL HART (through an interpreter.) I am a native of Amsterdam; I came to England nine or ten weeks ago, …. – I became acquainted with the prisoner, slightly, about a fortnight after I came to this country; I was courting his sister, and do so now. On a Monday morning, about eight o’clock, I met the prisoner in the neighbourhood, and went with him up the street to Whitechapel; we went into a public-house, and there had two quarterns of gin together- we then went back to the prisoner’s lodging: before we got there he asked me if I had my notes about me, and asked why I did not change them, as I could get English money for them; I said that at present I was not in need of money, and thought of saving them a little longer – I had them in my pocket at the time; they were two Amsterdam notes, for three hundred and two hundred guilders- he asked me to come home, and I went to his lodgings in Goulston-street, Whitechapel – when we got up stairs he asked me to let him look at the notes; I took them out of my pocket, intending to show them to him – I held them in my own hand; the prisoner took them out of my hand with one hand, and gave me a blow with his other hand – he went down stairs; I did not follow him immediately –[Hart] Cohen, his wife, and the prisoner’s wife and sister were in the room…. I went that evening to the Police-station, and told the inspector, who sent a Policeman with me, and he took the prisoner; I had a man with me, who interpreted for me – I have not seen or heard of my notes since – a guilder is worth 20d.

[Goulston Street was the street where my Cohen relatives were living on the 1841 English census. I tried to find a familial connection between Isaac Isaacs and my relatives but was unable to do so. I believe he was just a neighbor.] 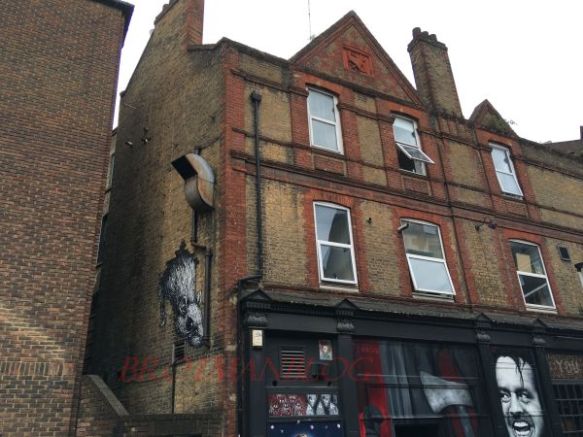 HART COHEN . I was in the prisoner’s room when he and the prosecutor came in, between eight and half-past eight o’clock in the morning – they spoke in Hebrew, which I understood, but did not notice what they were talking about; I saw [the prosecutor] Hart open his pocket-book, and take out some papers – the prisoner snatched them out of his hand, gave him a push, and ran down stairs; I could not see what the papers were, but [the prosecutor] Hart called out in Hebrew, “I have lost five hundred guilders;” I had seen him in possession of a three hundred and two hundred guilders Amsterdam notes; I have not seen them since.

[I found it interesting that Hart understood Hebrew—an indication that he was connected to Judaism and Jewish traditions.]

[Cross-examination of Hart Cohen]:  Who was in the room? A. My wife, the prisoner’s wife, his sister, and children: he being an intended brother-in-law, I did not like to interfere – I did not call Stop thief! my wife was alarmed – the prosecutor was standing up; he could have followed him down stairs if he chose – I had merely called there because the children were ill with the measles; I saw two men carrying the prisoner home, drunk, about two o’clock; the prosecutor went to Brighton, and my son went with him as an interpreter, and I wrote to him, directing my letters “Lewis Cohen,” which was my son’s name – the prisoner was to inquire at the post-office for a letter in that name; my wife is too ill to be here.

[When Hart testified “he being an intended brother-in-law,” I at first thought he meant that Isaacs was to be married to either his sister or his wife Rachel’s sister, but Isaacs was already married. On rereading, it was clear to me that Hart Cohen was referring to the fact that Michael Hart was courting Isaacs’ sister and thus was his intended brother-in-law.” It’s clear from this comment and the one that follows that Hart had not wanted to get involved in this dispute.]

[It was the mention of his son Lewis that helped to convince me that this was my Hart Cohen. Lewis would have been eleven years old at that time.]

[Witness for Isaacs] MARY ISAAC . I was at the prisoner’s house, between eight and nine o’clock, when this gentleman came up stairs, and he gave Mr. Isaacs the notes – I live there as servant to the prisoner; I am not related to him; Mr. and Mrs. Cohen. Mr. and Mrs. Isaacs, and I were in the room, nobody else – I cannot speak Hebrew; I saw the prosecutor give the prisoner the notes; he put them into his pocket, had his breakfast, shaved himself, and went down – before he went down the prosecutor took out his pocket-book, and wrote down on a piece of paper, how many guilders there were, and how much they would come to – I did not read the paper; he wrote it in numbers – I understand numbers; the prisoner then went down – Mr. Cohen went down directly after.

HART COHEN . I did not notice [Mary] Isaac there, and do not suppose that she was – it is a middling sized room, and has a bed in it.3

[This testimony effectively undercut Mary Isaac’s testimony. Hart made it clear that there was no way that he would not have seen her if she were in the room, given the size of the room.]

There were other witnesses and testimony, but I was primarily interested in the role my relative played in this dispute. And what did I learn? That my three-times great-grandfather was a man who did not initially want to get involved, but did his civic duty and testified to the facts he observed, that he knew Hebrew, and that my great-grandparents were neighbors who would come check on sick children. Given that I’d known nothing about his personality beforehand, these are wonderful insights.

Take a look at the Old Bailey project website if you ever had relatives living in London. It could provide interesting insights into their lives.

28 thoughts on “My Three-Times Great-Grandfather Hart Cohen, Witness for the Prosecution”