Two weeks ago I said I was taking a break, trying to figure out where to go next with my research and clearing my head. Well, my head is still not clear, and I still am on the fence about what to do next.

But while I was taking that breather, I heard from multiple new cousins as well as new communications from cousins I’d already found. New photos, new stories, new people. These include new DNA matches on my Brotman line, new photos for my Schoenthal line, new photos for my Seligmann line, a new connection from a Seligmann cousin who also appears to be a Goldschmidt cousin, a new Katzenstein cousin, a set of documents sent by a man living in Oberlistingen about the Goldschmidts, and numerous other questions, comments, or requests coming from my blog, Facebook, or email.  I will blog about many of these once I get my arms wrapped around the details.

All of this has given me a shot in the arm (and yes, I now am fully vaccinated against COVID as well) that I sorely needed. It’s so hard to transition from one research project to another, especially after three years. So these smaller, more focused projects are what I need right now. Especially since I also want to spend some time promoting my new book, Santa Fe Love Song.

Today I want to share an amazing photograph that my cousin Greg Rapp sent me. He cannot identify anyone in the photograph, but Greg is a Goldschmidt cousin (a descendant of Jacob Meier Goldschmidt), and the photo was labeled “New Year’s Eve 1919-1920.” Whether or not we can ever identify anyone in the photograph, it is nevertheless worth sharing. It captures German society during the Weimar Republic. The young women smoking cigarettes evoke that era as does the energy, the expressions, and the postures of all the young people in the picture.

If anyone can identify anyone in this photograph, please let me know. 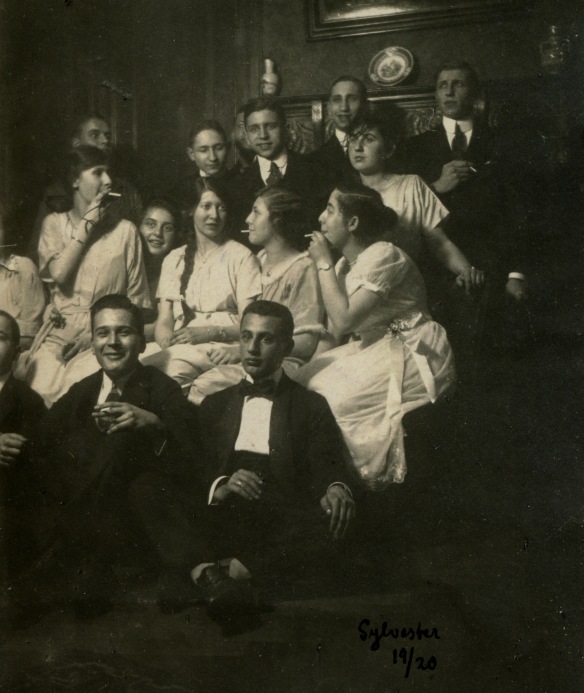