Searching for information about the death of my great-grandmother’s second cousin Baruch Blumenfeld led me down several rabbit holes. And I am still digging!

The first thirty years of his life were easy to uncover. Baruch Blumenfeld was the second child born to Abraham Blumenfeld II and Giedel Strauss. He was born on January 29, 1843, in Neustadt, Germany.

On February 20, 1872, he married Emma Docter, daughter of Joseph Docter and Zerline Wallach. Emma was born on February 9, 1848, in Gilserberg, Germany; her father was a veterinarian. Baruch was a merchant.

Baruch and Emma had two daughters. Antonie was born in Momberg on December 25, 1872, and Charlotte Jeanette was born three years later on June 28, 1875, also in Momberg. 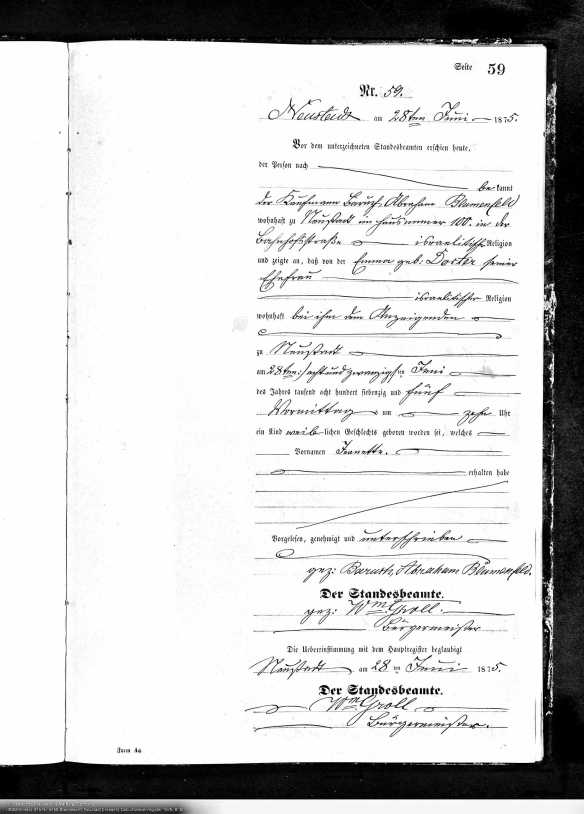 Antonie married Sussel Siegfried Engelbert on November 5, 1894, in Neustadt. He was born on January 3, 1867, in Kassel, Germany, to Jacob Engelbert and Julie Oppenheim. Siegfried was a merchant.

I am very grateful to Antonie’s great-granddaughter Marsha who shared the wonderful photographs of Antonie and her family included in this post. This is a photograph of Antonie and Siegfried on the occasion of their engagement. 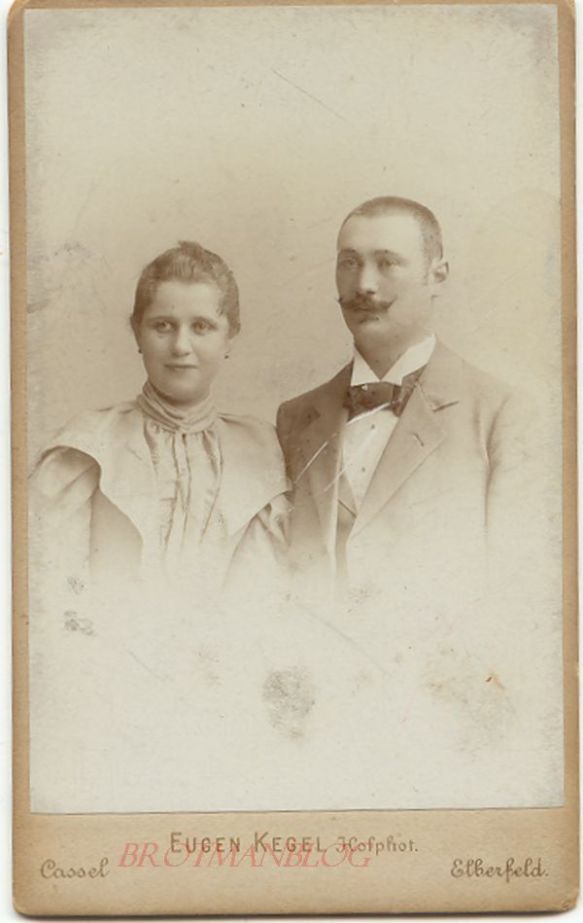 Antonie and Sussel had three children. Margot Engelbert was born on November 15, 1895, in Kassel.

Joseph Julius Engelbert was born on October 18, 1897, in Kassel. 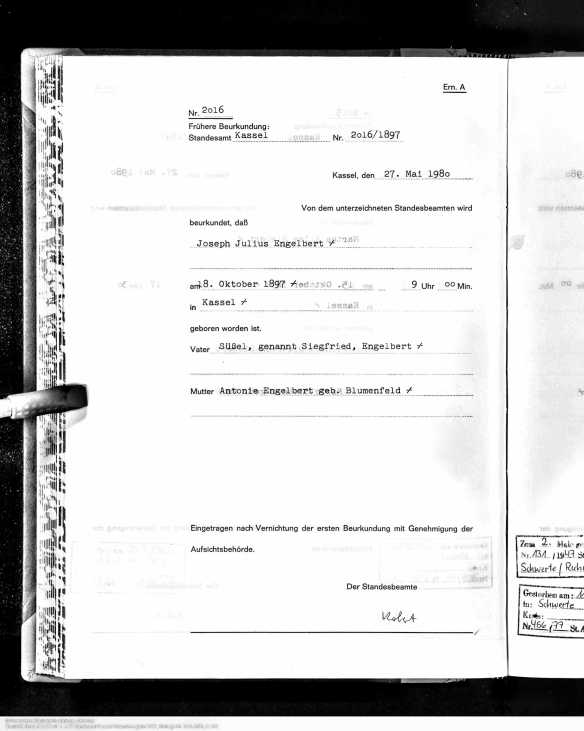 Elfriede Caroline Engelbert was born on June 3, 1900, in Kassel. 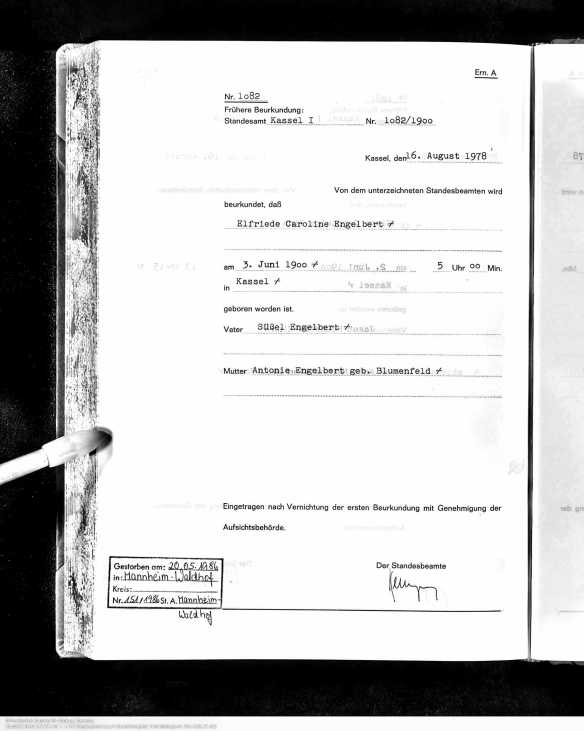 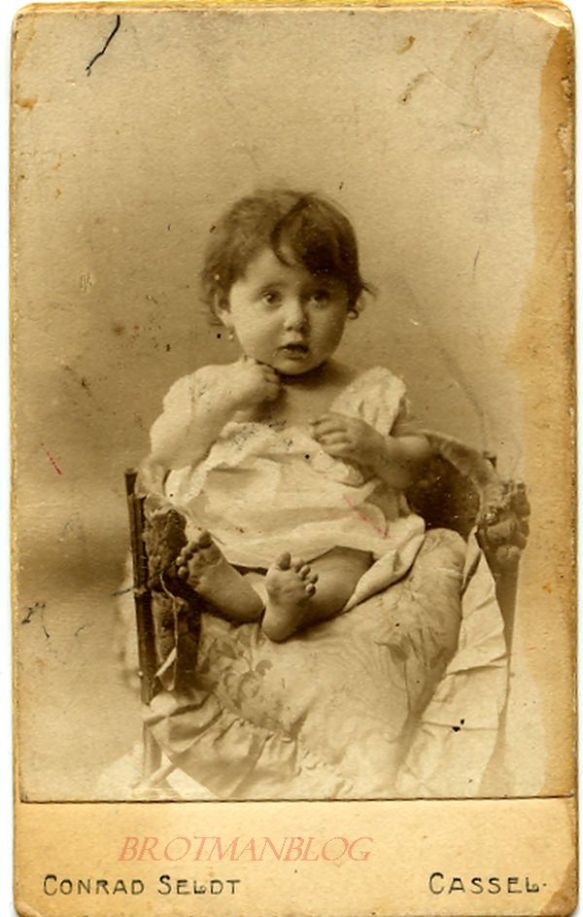 On January 24, 1900, Antonie’s sister Charlotte married Hermann Hammel, son of Abraham Hammel and Karoline Kahn. Hermann was born in Roedelheim bei Frankfurt on November 5, 1867. He was previously married to Thekla Kass, who had died on July 21, 1898,  one week after giving birth to their daughter Caecelia, who then died when she was less than a month old on August 5, 1898.1 Charlotte and Hermann had one daughter together, Klara, born on February 17, 1901, in Frankfurt.

Emma died on December 2, 1917; she was 69 years old. She’d been very fortunate to live to see those four grandchildren grow up or at least reach their teenage years.

Now we get to the mystery. Emma’s death record describes her as a widow, which would mean that Baruch had predeceased her. But I could not find a death record for Baruch in Germany nor has anyone else.

Several Ancestry trees and other secondary sources reported that Baruch died in New York City on September 22, 1923. When I first saw that, I was skeptical. Was this a mistake? Had someone attached a death record for the wrong Baruch Blumenfeld and then been copied by other tree owners?  I started to search for a source to prove where Baruch died.

Although I didn’t yet have the actual death certificate for the Baruch Blumenfeld who died on September 22, 1923, in New York, I found transcription on FamilySearch:2

In many ways this fit my Baruch Blumenfeld. He was a widower in 1923 and 80 years old. He came from a long line of butchers. His father’s name was Abraham. His mother’s name wasn’t Jette Lhauss, but it was Giedel Strauss, and that’s close enough to assume this was a transcription error by the indexer at FamilySearch.

I found a Baruch Blumenfeld on the 1920 US census living at the address given on this death certificate—1505 East 83rd Street in New York. He was single and living as a boarder with Getter [sic: actually Getta] and Emma Neuberger, who were also German born. But according to the census record, this Baruch had come to the US in 1869 and had become a naturalized US citizen in 1875. 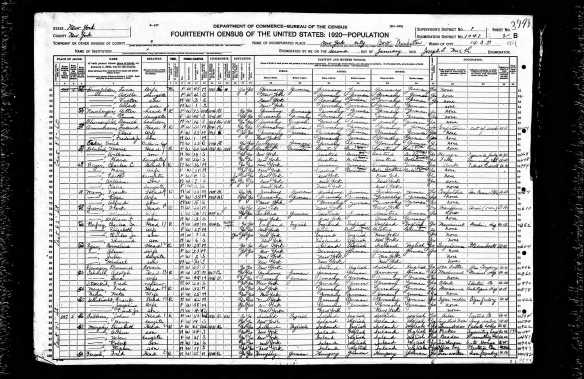 My Baruch married Emma Docter in 1872 and had two daughters between then and 1875 in Neustadt, Germany. How could he have been living in the United States and getting naturalized there? Was he living in New York and traveling to Germany to father those children? Or could the Baruch Blumenfeld living in New York be a different man who just happened to be born the same year and have a father the same name as my cousin Baruch?

22 thoughts on “Baruch Blumenfeld: Where and When Did He Die?”