Charlotte Jeanette Blumenfeld, as we saw, married Hermann Hammel on January 24, 1900, and they had one daughter, Klara, who was born on February 17, 1901, in Frankfurt, Germany, where Charlotte and Hermann resided. Hermann was a merchant.

On July 26, 1920, in Frankfurt, Klara Hammel married Siegfried Braun. He was more than eleven years older than Klara and was born in Nuernberg on August 27, 1889. His parents were Isidor Braun and Kathi Hermann; both had died by the time Siegfried served in the German army during World War I. Siegfried served for at least three years of the war in the infantry and in the automobile replacement unit. When he married Klara in 1920, he was living in Frankfurt and working as a merchant. 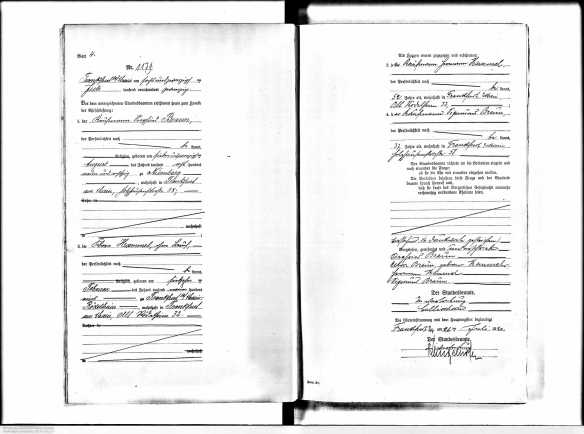 Klara and Siegfried’s first child Lieselotte was born in Frankfurt on September 4, 1922.1 Her brother Walter Isidor Braun was born a year later on December 7, 1923, also in Frankfurt.2 A third child was stillborn on January 25, 1926, in Frankfurt.3

The life of this family changed dramatically once Hitler came to power. I am very grateful to Klara and Siegfried’s grandson Stephen for sharing their stories with me. They all immigrated to Amsterdam not long after Hitler’s rise to power. While there, Lieselotte, then a teenager, met the man who would later become her husband, Fritz (later Fred) Rothschild. He was son of Daniel Rothschild and Martha Aumann and was born in Bruchsal, Germany, on August 22, 1921. His family also had left Germany for Amsterdam to escape the Nazis.4

Hermann Hammel, Charlotte Blumenfeld’s husband, died in Amsterdam on February 19, 1939; he was 71 years old. After World War II started in September, 1939, the rest of the Hammel family left Amsterdam for Wales, where they were living at the time of the enumeration of the 1939 England and Wales Register. Lieselotte was thus separated from her boyfriend Fred Rothschild, but the two corresponded during the war; his family had also left Amsterdam and immigrated to Canada.5

But even the UK was not a true safe harbor for the family. Siegfried was determined to be an enemy alien on October 12, 1939, and he and his family were sent to the Isle of Man like so many other Jewish refugees from Germany. Only Charlotte was not interned. They were released on September 30, 1940, and relocated to London where they lived for the duration of the war.6 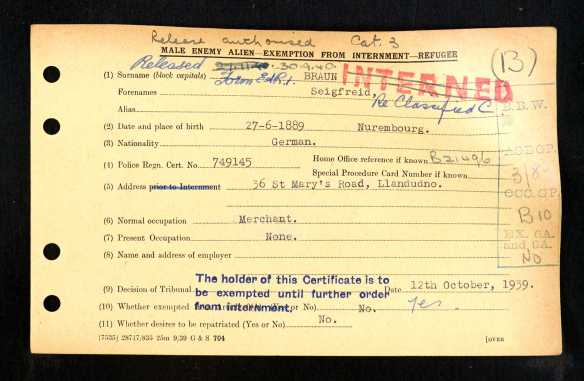 Once the war ended, Lieselotte Braun was reunited with Fred Rothschild, and they were married in London on August 11, 1946. 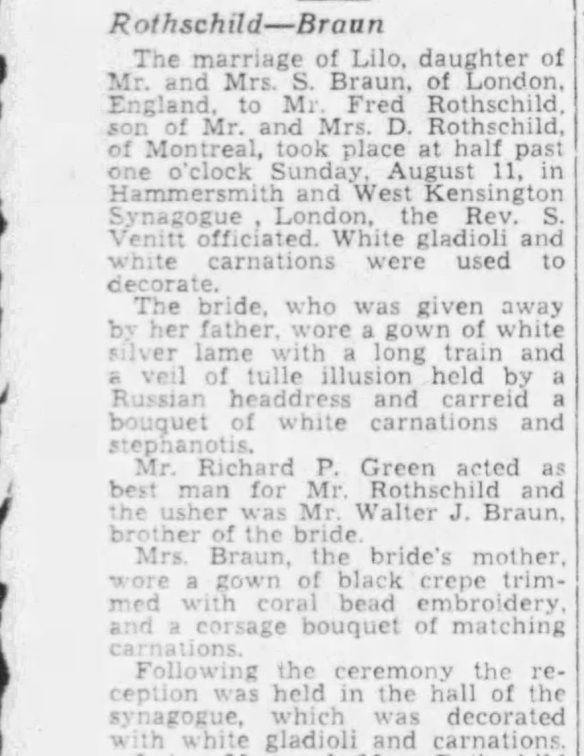 After marrying, Lieselotte and Fred immigrated to Canada and then the US and eventually settled in New York City; they would have two children.

A year after Lieselotte’s marriage, the rest of her family—her grandmother Charlotte, her parents Klara (now Claire) Hammel and Siegfried Braun, and her brother Walter—also immigrated to the US and settled in New York. They eventually owned a women’s clothing store in Washington Heights in New York.7

Walter Braun married Hannelore Delheim in 1954.8 She was born in Ludwigschafen, Germany, in August 1931, and came to the US with her parents, Friedericke and Rosette Delheim, and her brother in 1939.9 Walter and Hannelore had two children.

Charlotte Blumenfeld Hammel died on July 11, 1958; she was 83 years old.10 I found it poignant that she ended up in New York living not far from where her father Baruch had been living in 1920. I wonder whether she ever knew that.

Her son-in-law Siegfried Braun died on August 8, 1961 at the age of 71.11 His wife Claire Hammel Braun survived him by over twenty years. She died July 19, 1983, in Ridgewood, New Jersey. She was 83 and was survived by her children and grandchildren.12

Claire’s son Walter Braun only survived her by three years. He was 62 when he died on March 15, 1986, in Ridgewood, New Jersey. He was survived by his wife and children as well as his sister Lieselotte.13

Lieselotte lived to age 91 and died on October 13, 2013, in Palm Beach, Florida. Her husband Fred Rothschild died the following year, also in Palm Beach. He was 92 when he died on March 27, 2014.14 They are survived by their children, grandchildren, and great-grandchildren.

Thus, Baruch Blumenfeld, who left his family in Germany sometime before 1900 and came to the US where he died in 1923, has numerous descendants now living in the US. They are here because their parents and grandparents and great-grandparents were either able to leave Germany before it was too late like Charlotte and her family and Antonie’s son Julius and his family and Gunther Goldschmidt or because they somehow managed to survive the tortures of the Holocaust like Antonie’s daughter Elfriede, her husband Rudolf and their daughter Inge.

Tragically, Baruch’s granddaughter—Antonie’s daughter—Margot, her husband Gustav, and their daughter Edith were not among those who survived or escaped in time. They are among the six million who must never be forgotten.

16 thoughts on “The Final Chapter of Baruch Blumenfeld’s Family: His Daughter Charlotte”