The extended Sigmund family suffered one more loss between 1910 and 1920 when Leo Sigmund, Ella and Albert’s son, died at age 54 on July 31, 1913. According to his obituary, he had suffered from a nervous condition for two years. Leo’s children were only thirteen (Tracy Edna) and eleven (Albert Lloyd) when their father died. As the obituary points out, Leo was the only remaining family member carrying on the hat and fur business started by Albert Sigmund in 1846, A. Sigmund & Son. 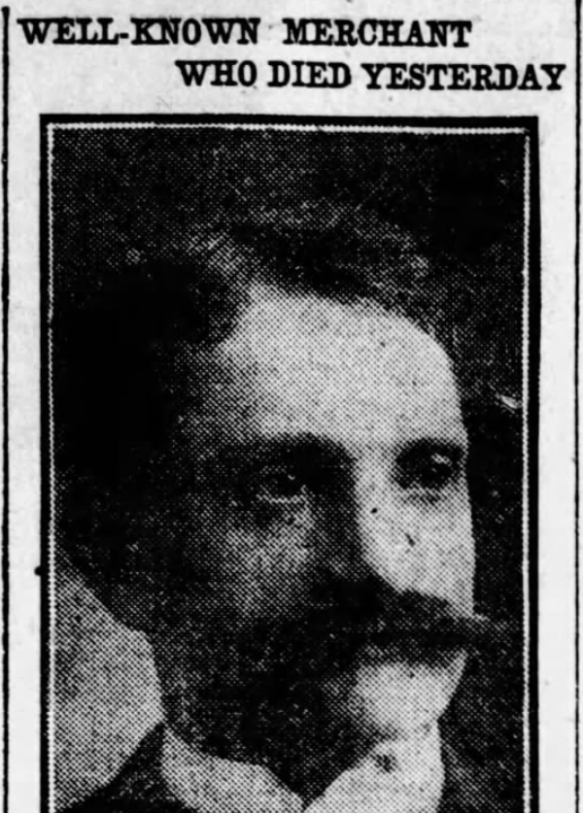 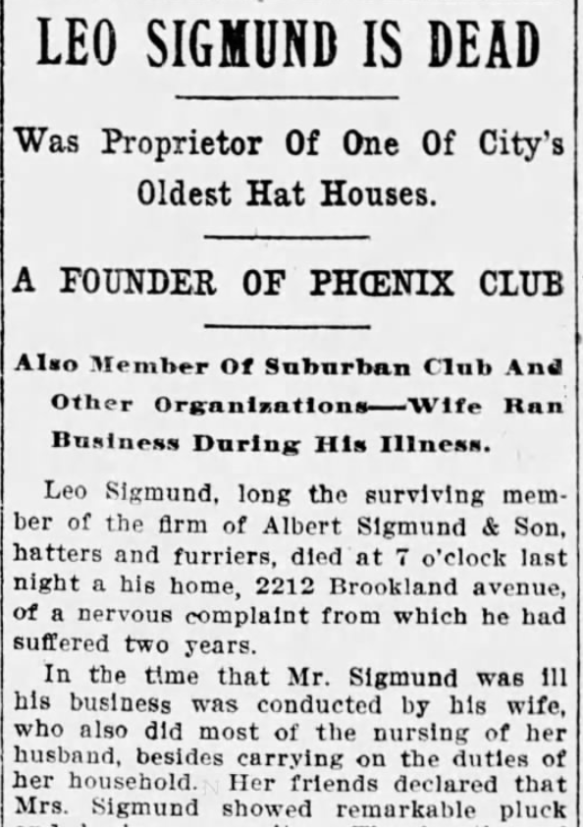 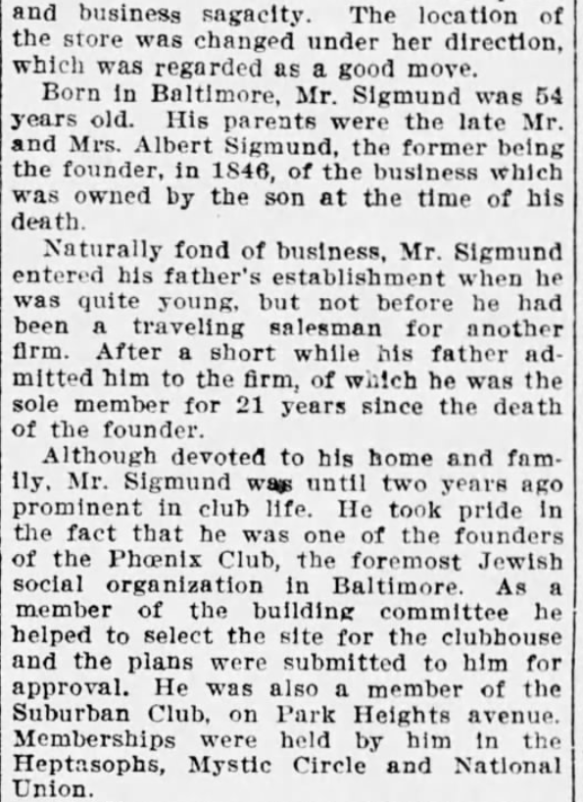 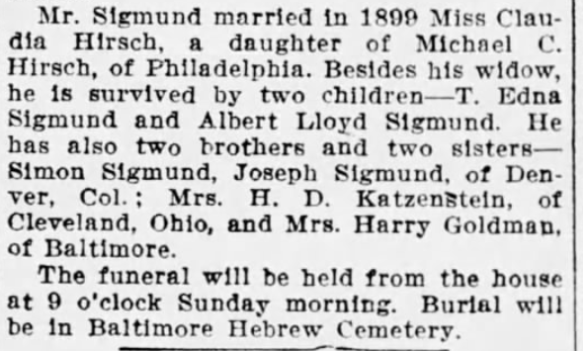 The obituary is as much a tribute to Leo’s wife Claudia as it is to Leo; it describes how she took over and even improved the business while Leo was ill as well as nursing Leo and taking care of the household.

Unfortunately, Claudia found herself in a struggle to keep the business after Leo’s death. According to a complaint she filed in 1916 to have receivers appointed to the business, her own brother Michael Hirsch fraudulently induced her to sell him the business for far less than its value in the aftermath of Leo’s death. She claimed that the business was worth at least $45,000 (if valued at more than $60,000 in assets with $14,800 in liabilities) and that she sold it to Michael for only $8,000, leaving her with only $1,600 after paying off the debts. 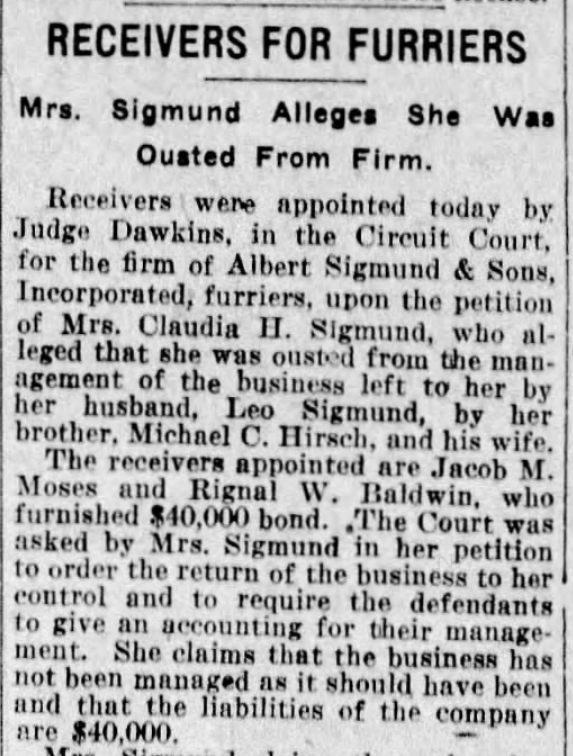 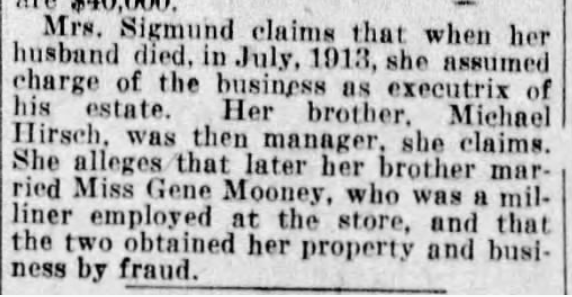 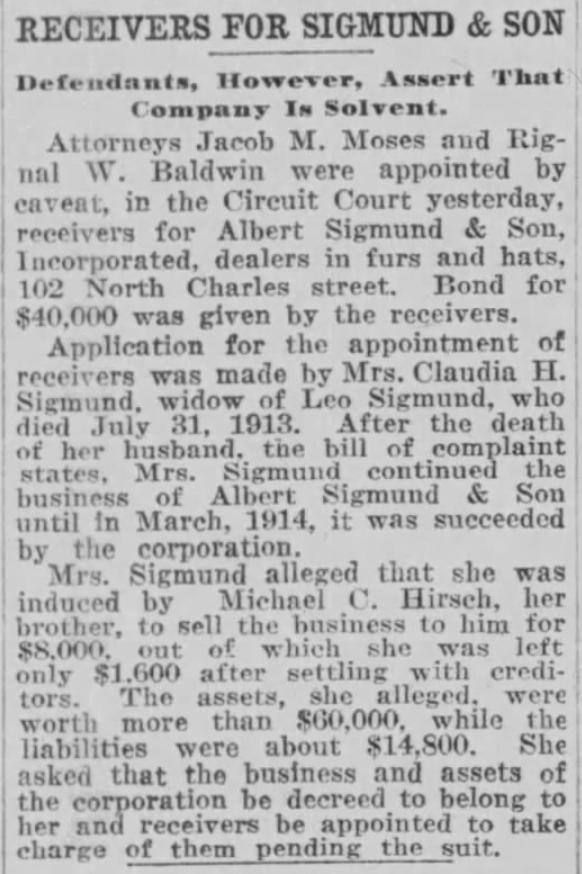 I don’t know whether Claudia ever received any compensation for the alleged fraud committed by her brother as I could find no story that reported on that question. As for Michael Hirsch, he and his wife started another business, and it also ended up in bankruptcy.1

In 1920 Claudia Hirsch Sigmund and her two children, now 20 and 18, were living in Baltimore with her mother and sister. Claudia was not employed outside the home, but her daughter T. Edna was working as a stenographer for a soil improvement company and her son A. Lloyd was an office helper in a straw hat factory.

And the business started by Albert Sigmund in 1846 and that supported his family for so many years was gone.

Fortunately, the 1910s were better years for the rest of Ella Goldschmidt Sigmund’s children and grandchildren, as the next post will reveal.

In my last post, I wrote about the family of Caroline Dreyfuss and Moses Wiler—their four children, Eliza, Simon, Fanny, and Clara—and some of the issues that had come up in trying to track the family up to 1900.  I focused primarily on Eliza Wiler and the issues I had finding her children Joseph, Flora, Nellie, Minnie, and Leon, and her husband Leman Simon on the 1900 census after Eliza died in 1897.  What I found was that they were fairly scattered.   Leman and Leon were living as lodgers in one place, Nellie and Minnie as boarders in another place, and Flora was living with her husband Nathan Strouse and son Lester.  I never found Joseph on the 1900 census, but in 1901 he was listed in Philadelphia living at the same address as his father Leman.

I also briefly mentioned Eliza’s siblings, Simon, Fanny, and Clara.  Simon was a single man working and living in a hotel in Philadelphia, Clara had married Daniel Meyers and by 1900 had had 13 children with him, eleven of whom were still living at home.  And Fanny Wiler was still missing.

Or so it seemed. I had stopped looking for her after hitting a brick wall in late December when I wrote about the mystery of Fanny Wiler.  But while searching for information on the various children of Eliza and Leman Simon, I ran across this strange news article from January 1899. 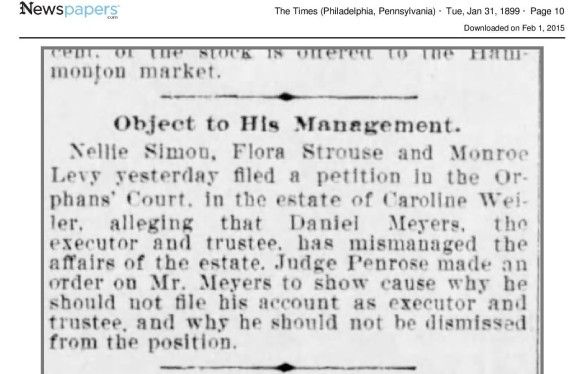 Caroline Dreyfuss W(e)iler (the spelling of the name varied throughout these news stories and documents) had died in 1885, and now fourteen years later three people were challenging the administration of her estate by the executor and trustee, Daniel Meyers, Caroline’s son-in-law and Clara Wiler’s husband.  I knew all the names mentioned but one.  Flora Strouse was Caroline’s granddaughter as was Nellie Simon.  But who was Monroe Levy? That name did not mean anything to me, and although I checked and found one Monroe Levy living in Philadelphia on the 1900 census, he was the 26 year old  son of Joseph and Bella Levy, a couple who had no connection to my family, as far as I could tell.

So I looked for follow-up articles about the challenge to Daniel Meyers as executor and located this second article from May, 1899: 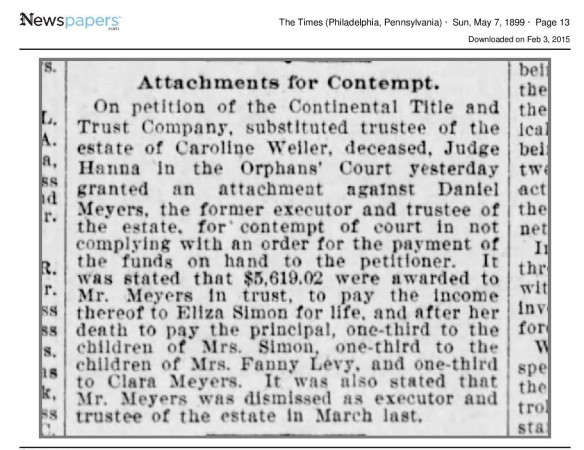 Now I understood why this was being litigated almost fifteen years after Caroline died.  The will had appointed Daniel Meyers to be the executor and trustee of the $5,619 estate [estimated to be equivalent to $160,000 in 2015 dollars] and directed him to pay the income from the estate to Caroline’s daughter Eliza Simon for the duration of Eliza’s life; after that, the principal was to be distributed to the grandchildren of Caroline.[1]  Eliza Simon died in August, 1897, and apparently Daniel Meyers never distributed the money to the grandchildren.  Thus, they sued him in 1899, and they won.  The estate was handed over the Continental Title and Trust Company.

But then who was Monroe Levy?  His mother’s name was Bella, not Fanny, according to the 1900 census.  So I searched some more.  And I found this news article dated a month before the last one posted above:

This article named four of Eliza Simon’s children (all but Joseph) and three others who together made up a majority of the parties of interest in the challenge to Daniel Meyer’s handling of the estate: Alfred, Leon and Monroe Levy.  (Obviously Daniel and Clara Meyers’ own children were not a party to the challenge.)  Alfred, Leon, and Monroe Levy—-suddenly the light bulb went on.  These had to be Fanny’s children.  But then where was Fanny? And who was Bella, the reported mother of Monroe Levy on the 1900 census?

So I returned to that 1900 census where I had found Monroe Levy and saw that he had three siblings: Alfred, born in 1868, Leon born in 1872, and then Miriam born in 1879.  Monroe was born in 1874.  Could it be that Fanny had died between Monroe’s birth and Miriam’s birth and that Bella was a second wife?

I could not find a death certificate for Fanny Levy, so I searched for death certificates for the three Levy brothers, and sure enough, each of them had a mother named Fannie or Fanny on their death certificate.  Sure, Monroe’s said her name was Fanny Cohen, and Leon’s just said Fannie.  But Alfred’s, the last I found, quite clearly states that his mother’s maiden name was Fannie Weiler.  I had found her!  Fanny Wiler had married Joseph Levy and had three sons between 1868 and 1874. 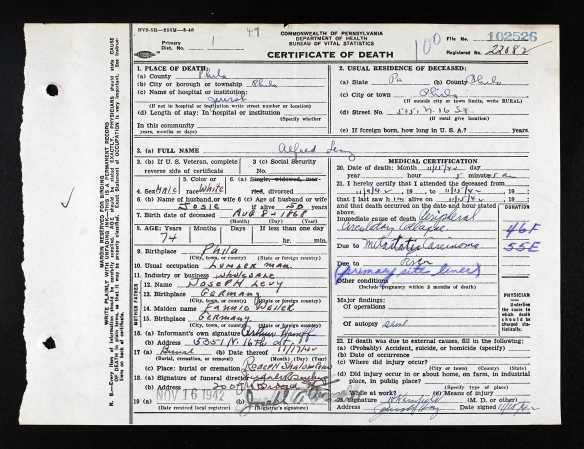 But then what happened? Who was Bella, and when did she marry Joseph?  Or was she the same person as Fanny using a very different name? I wasn’t sure, so I searched for Miriam’s death certificate.  I had assumed that Miriam was Bella’s child because of the age gap between Monroe and Bella.  When I found Miriam’s death certificate, it confirmed my hunch.  Miriam’s mother was Bella Strouse, not Fanny Wiler or Fanny anything. 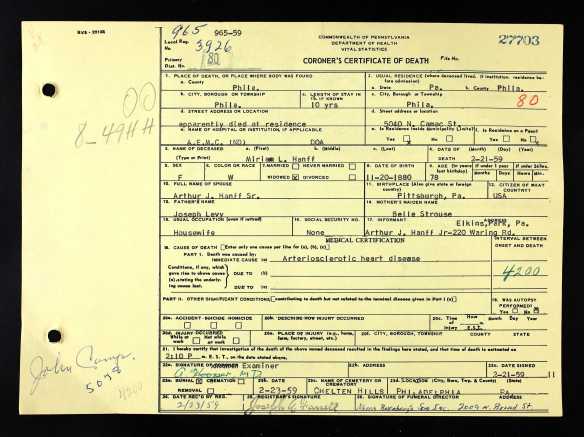 Bella Strouse?  Hmmm, I thought.  Was she a relative of Nathan Strouse, the husband of Fanny’s niece, Flora Simon Strouse?  I found Bella Strouse Levy’s death certificate, and although her parents were born in Germany as were Nathan’s parents, they had different names.  Perhaps Bella was a cousin.  I need to dig more deeply to be sure.

But Bella is not my real concern or interest here.  It’s Fanny.  Fanny Wiler Levy.  I’d not yet found a marriage or death record for her, but her sons’ death certificates and the news articles naming them as the grandchildren of Caroline Dreyfuss Wiler were really all I needed.  I’d found her.  And, of course, it was when I wasn’t even looking for her.

Then Lyla from the Philadelphia Genealogy group on Facebook posted this document in response to a question I had posted about Fanny:[2] 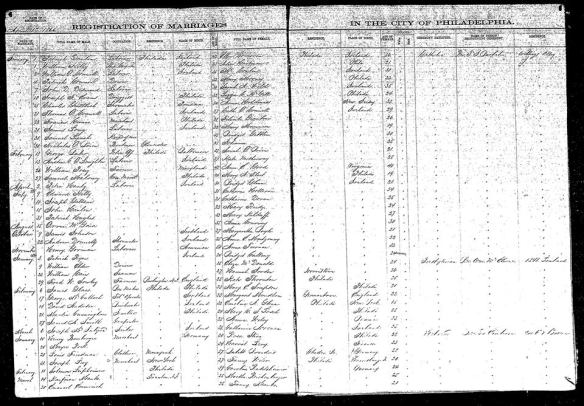 If you look at the one that is fourth from the bottom, you will see the registration of the marriage on January 31, 1866 of Joseph Levy, a 27 year old New York merchant born in Germany, and Fanny Wiler, a 26 year old Philadelphia resident born in Harrisburg(h).  There can be no question that this was the marriage of my Fanny Wiler, the mother of Alfred, Leon, and Monroe Levy.

The odd thing that is still bothering me is that I cannot find the Levy family on either the 1870 census, when Joseph, Fanny, and Alfred would have been together, or on the 1880 census, when Joseph, Bella, Alfred, Leon, Monroe, and Miriam would have been living together.  And there is also a document in the New York City births database on familysearch for a Bertha Levi born in November 1866 in New York to Joseph Levi and Fanny Wieler.  I think this might also have been a child of my Fanny, but I cannot find any other document for Bertha.

So there are still some unresolved questions, but the big question has been answered.  I know what happened to Fanny Wiler. She married in 1866, had three, perhaps four children between 1866 and 1874, and then sometime after that, she must have died.  She would have been not yet forty years old.  And she left behind three little boys all under the age of ten.   It might not have been as gruesome as the story of the other Fanny Wyler and Max Michaels, but it was nevertheless a sad story.

I guess I should be grateful to Daniel Meyers for violating his fiduciary duties as a trustee.  But for the lawsuit against him, I might never have found Fanny Wiler.

[1] I don’t know why Caroline would have favored Eliza in this way.  Eliza was the oldest child, but when Caroline died, she had at least two other children who were still alive.  And Eliza was not the only one who had had children at that point either.

[2] Lyla subscribes to a paid service for access to Philadelphia records, a service I was not aware of until she posted.  I am now waiting for my own subscription to come through so that I can also find these older vital records from the city where so many of my paternal relatives lived and died.  The copy posted here is not very legible, but I was able to make out the names and other essentials for Joseph Levy and Fanny Wiler.