Back on July 30, 2019, I posted some wonderful photographs that I’d received from my cousin Sally of her grandmother Etta Wolfe Wise and her family. Etta was my grandmother Eva Schoenthal Cohen’s first cousin. Sally recently located three additional photographs of Etta, her husband Max Wise, and their six children. She has graciously shared those photographs with me. 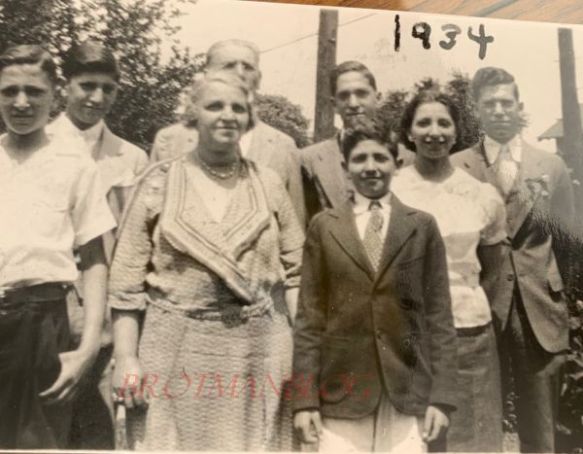 The second photograph must have been taken some years later. In the foreground are Florence Wise and her mother Etta Wolfe Wise (in polka dots). The other women are not known.

Finally, the third photograph includes the four sons of Max and Etta Wise as well as several unidentified men and a child. Irving Wise is to the far left; Richard Wise is at the far right. Max, Jr, stands in the center with his thumb hooked into his belt. In the center of the back row behind Max Jr.’s left shoulder is his brother Bob. The others Sally could not identify.1

I wonder whether this photo and the one above of all women were taken at the same event. Perhaps it was the wedding of one of the Wise children or a cousin?

Thank you once again to my cousin Sally for sharing these family photographs.

For me, genetic genealogy has been disappointing as a tool for finding new ancestors and breaking down brickwalls, but it has occasionally been useful for confirming what I already knew through traditional research. For example, in March I contacted a DNA match named Sally who came up as a fourth cousin on Ancestry, and after contacting her and checking my tree and hers, we realized that we were both the great-great-granddaughters of Levi Schoenthal and Henrietta Hamberg.  That is, Sally is in fact my third cousin, even closer than the DNA estimate on Ancestry.

Sally is descended from Levi and Henrietta’s daughter Amalie Schoenthal, and I am descended through their son Isidore Schoenthal. Sally and I exchanged family stories and information and photographs, and she generously agreed to let me share those stories and photographs on the blog. As you will see, there are some apparent family resemblances traceable to our shared Schoenthal ancestry.

Sally has no photographs of her great-grandparents, but shared with me photographs of her grandmother Etta, all taken when she was a grandmother.  I will start with this one as it is the clearest photograph of her and shows much of her personality, as described to me by Sally. Sally knew Etta well because she died when Sally was eight years old. She remembers her grandmother lovingly and described her as easy-going and soft spoken and as someone who always enjoyed family trips and outings. Sally remembers that when she was just four or five, her grandmother would share shrimp cocktails with her. Can’t you see that sweetness in her face in this photo?

Etta Wolfe married Maximilian Wise in 1910 in Pittsburgh, as noted here on the blog. Etta and Max had six children, a daughter Florence and then five boys, Irving, Richard, Max Jr., Robert, and Warren. Sally’s father Robert was their fifth child and fourth son. Here are two pictures of Max and Etta’s children.

Sally told me that Etta and Max converted from Judaism to Christian Science because they believed that their daughter Florence’s clubfoot was cured by Christian Science. Unfortunately, according to Sally, several other members of the family were not so fortunate with their faith in Christian Science and died fairly young after refusing traditional medical care.

Sally’s father Robert Wise enlisted in the Army on April 19, 1943, and served until February 20, 1946.1 Sally told me that her father was an Army Staff Sergeant Engineer, Aviation Battalion, and was stationed most of his time in the service during World War II in the South Pacific, building an airport and serving in combat.  After the atomic bomb was dropped on Nagasaki in August 1945, Bob drove two generals in his Jeep to see the devastation there and photographed what he saw. He also was at the airport when the Japanese planes landed for the signing of the peace treaty; he climbed over a wall and took pictures of the two planes. Unfortunately, Sally does not have access to those historically important photographs.

Bob Wise’s army experience was part of an exhibit about local veterans who served in World War II that was curated by the Middletown (Ohio) Historical Society and shown at the Fine Arts Center in Middletown in 2015.  These photographs of Robert were part of that exhibit, as was the one above of the six children of Max and Etta:

Robert Wise as a young boy in Middetown. Courtesy of Sally Wise Myers 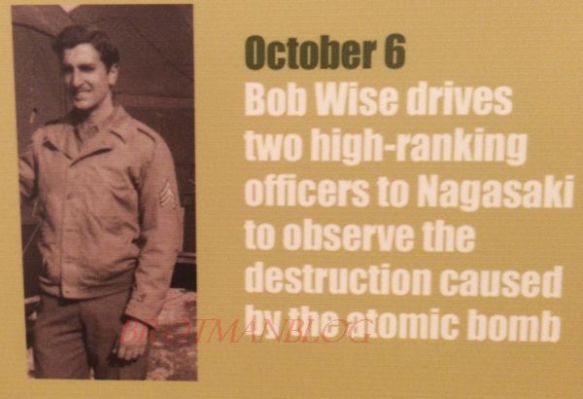 Sally also shared these additional photographs of her father taken during his service in World War II:

After the war, Robert married Mildred Myers on January 10, 1948, in Ohio. Sally sent me this photograph from their wedding:

The family of Bob Wise. Courtesy of Sally Wise Myers

Look at the eyes. Do you see the resemblances that Sally and I see? Or are we just seeing what we want to see?

Finally, two photographs of Etta Wolfe and Max Wise’s descendants—their children and their grandchildren. What a legacy!

Etta Wolfe Wise and all of her grandchildren. Courtesy of Sally Wise Myers.

Thank you, Sally, for sharing the stories and photographs with me. I am so glad we found each other.