First, the Pollocks. Mathilde (Dreyfuss Nusbaum) and Moses Pollock had relocated from Harrisburg to Philadelphia in the mid-1860s. Moses was engaged in the retail dry goods business. In June 1870 when the census was taken, the Pollocks had a very full house.  Mathilde’s daughter Flora and her new husband Samuel were living with them along with their new baby Meyer. Samuel was working on the wholesale side of clothing sales. In addition, Mathilde’s son Albert Nusbaum, now 19 and working as a clerk in a dry goods store (presumably his stepfather’s business), was living with them as well as Mathilde and Moses’ children, Emanuel (14) and Miriam (11), who were both in school.  In addition, there were three domestic servants living with them.  Moses must have been doing quite well.

It’s a good thing they had those servants because there were also three young children living with them, Annie (5), Alice (4), and Wilhelmina Jastrow (seven months old) plus another young woman, Augusta Wolfsohn, who was 22 years old.  Annie and Alice were born in Hesse-Darmstadt, but their baby sister Wilhelmina had been born in Pennsylvania in September, 1869.  Who were they? Where were their parents? Augusta was born in Prussia and does not appear to be the mother of the three young girls.  Who was she?  None of these girls was living with the Pollocks as of the 1880 census.

Fortunately, this was a mystery that did not take long to solve.  A little research on Ancestry.com, and I was able to find a happy ending to the story.  The Jastrow girls had parents, Marcus and Bertha (Wolfsohn) Jastrow.  By the second enumeration of the 1870 census in Philadelphia, they and their aunt Augusta Wolfsohn were all under the same roof as their parents and other siblings.  I don’t know why they were with the Pollocks during the earlier enumeration, but I assume that they were very recent immigrants who did not have enough room to accommodate everyone, and Moses and Mathilde were kind enough to take in the three youngest children and their aunt.

But fate was not kind to Moses and Mathilde despite their kindness to the Jastrows.  In September 1870, they had a third child together (a fifth for Mathilde), Rosia, but Rosia did not live long.  On February 26, 1871, she died, only five months old, from diarrhea.  Mathilde was 45 years old when Rosia was born, making me doubt my skepticism about the parentage of Lottie Nusbaum. Perhaps women just kept having babies into the mid to late 40s back then with more frequency than I would have thought. 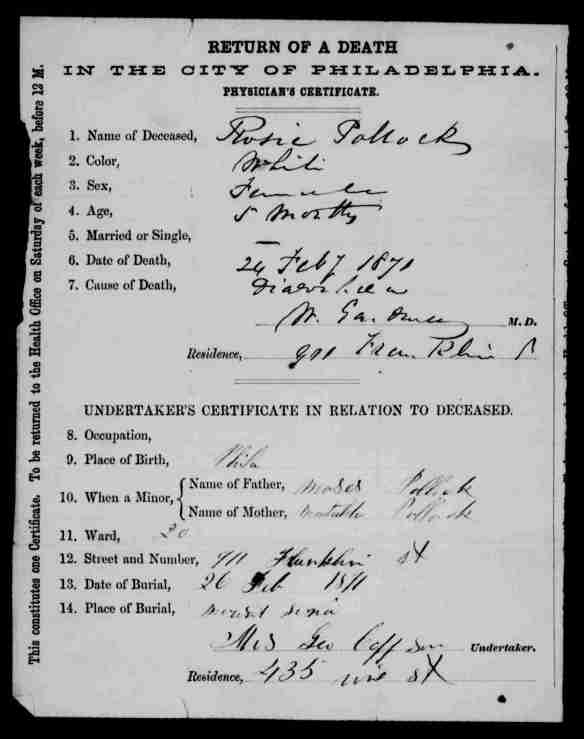 What makes this late birth seem even stranger is that Mathilde had become a grandmother just nine months before Rosia was born when her grandson Meyer was born in January, 1870. Meyer and his parents Flora and Samuel Simon were living with the Pollocks in June of 1870 when Mathilde was pregnant with Rosia.  It is hard to imagine being pregnant and a grandmother, but times were different then.

Flora (Nusbaum) and Samuel Simon were still living with Flora’s family at 911 Franklin Street in 1871, but seem to have moved to their own place in 1872, and I say “seemed to” because their address was 909 Franklin Street, so right next door to Mathilde and Moses Pollock. Then in 1873, they are back at 911 Franklin.   Samuel was in business with his brother Leman in 1871, but seems to be on his own after that. He has no occupation listed in 1873 in the directory. Perhaps Flora and Simon could no longer afford to have their own place and returned to the Pollock residence.

What was going on around them? Why had these two family business partnerships ended?  It’s always important to keep the historical and socioeconomic context in mind when doing family research, and perhaps the most important development both in the US and worldwide in the 1870s was the so-called “Long Depression.”  The period after the Civil War brought widespread economic growth with railroad construction, technological developments, and expansion of exports to European markets.  However, in a way not dissimilar to more recent economic crashes, the economy tumbled in 1873 when banks and investment firms did not realize the profits they had expected from investing in the railroads and could no longer cover the loans they had made in the frenzy of the post-Civil War boom.[1]  In addition, an economic crisis abroad resulted in decreased demand for American exports.

The credit crisis led to panic with many investors withdrawing their money from the banks, thus worsening the precarious position of the banks.  Although the government intervened to try and stop the crisis, the overall confidence in the economy was gone, jobs dried up, people stopped buying, and railroad construction came to a halt.  There was also evidence of a great deal of corruption that was uncovered during this time.  The effects of this crisis were felt across the United States for at least five years with widespread unemployment, poverty, and social unrest.

Moses Pollock continued to have some inconsistency in his occupation for the rest of the decade. In 1876 Mathilde and Moses Pollock are listed in business together selling “gentlemen’s furnishings” at 107 North 9th Street and were still living at 911 Franklin Street.  By 1878, they had moved to 934 North 8th Street, where they remained for many years.  Moses is listed as a salesman in the 1878, 1879, and 1880 Philadelphia directories, and according to the 1880 census he was working in a cloak store.  In 1880 he and Mathilde still had Albert Nusbaum, now 28, as well as Emanuel (24) and Miriam (21) living with them at home as well as one servant.  Albert had been working as a liquor salesman since 1873 when he was 21.  Emanuel had been in dry goods sales since 1877 when he was 21. Miriam and her mother Mathilde were “keeping house.”

Mathilde’s other daughter, Flora (Nusbaum) Simon and her husband Samuel meanwhile had had a second child.  Their daughter Minnie was born in 1873 or 1874 (documents vary).  Flora and Samuel seem to have moved out of the Pollock household sometime shortly thereafter and out of Philadelphia altogether by the end of the decade and perhaps even earlier.  It’s hard to know for sure because Samuel Simon was not an uncommon name.

There are three Samuel Simons listed in the 1874 Philadelphia directory: one was a laborer, one a restaurant worker, and a third was working in the ladies’ furnishings business.  None of the addresses line up with other members of the family, so I cannot tell which, if any of these Samuel Simons were married to Flora.  The ladies’ furnishings Samuel seems like the most likely, given the family’s pre-existing businesses, but I cannot be sure.  In 1875, there are two Samuel Simons, a laborer and a gardener.  Neither one seems likely to be Flora’s Samuel.

In 1876, there is only one Samuel Simon listed, a superintendent, and in 1877 again only one, a furrier.  In 1878 there was only Samuel the laborer, but in 1879 there were three Samuels: the laborer, the gardener, and a third selling produce.  My best hunch is that Samuel and Flora (Nusbaum) Simon had left Philadelphia by 1875.  According to the 1880 census, they were then living in Elkton, Maryland, about 50 miles from Philadelphia and 60 miles from Baltimore.  Samuel was working at a hotel there.  Again, my assumption is that the economic slowdown had contributed to this move away from their families in Philadelphia.

As will be evident as I examine each of the families, the Pollock line was not the only one that felt the impact of the Long Depression of the 1870s.

[1] I am greatly oversimplifying the causes and the effects of the Long Depression that began in 1873.  For more information, see http://www.socialwelfarehistory.com/eras/the-long-depression/   http://en.wikipedia.org/wiki/Panic_of_1873   http://macromarketmusings.blogspot.com/2010/05/about-that-long-depression-of-1870s_27.html

4 thoughts on “The Long Depression:  The Family of Mathilde Dreyfuss Nusbaum Pollock”