As I wrote in my last post, my Schoenthal great-grandparents died in 1941 and 1942.  At that time, three of their children were living on the East Coast: Harold in Montclair, New Jersey, Lester in Upper Darby, Pennsylvania, and my grandmother Eva in Philadelphia.

Gerson/Gary, the son whose asthma had taken them to Denver in 1907, continued to live in Denver with his wife Maude for many years, but in May, 1954 they decided to move to Desert Hot Springs, California, due to Gerson’s continuing health problems. The Desert Sentinel of Desert Hot Springs reported on June 10, 1954, p. 4, that, “Mr. and Mrs. Gary Sheridan are the lovely couple renting the Herb Ecclestone cottage for the summer. They are enamored of the village and will build a home here.” Sadly, within a few months of moving there, Gerson’s asthma finally took its toll, and he died at age 62.  As this article from the July 1, 1954, Desert Sentinel reported, it appears he and Maude had quickly made friends in their new home.

How very sad that a fluke in the weather contributed to his death from the asthma he had battled for so many years.

Lester died five years later in August 1959, when he was seventy years old and had retired to Florida with his wife Juliet Grace “Julia” Beck.  She lived another fourteen years, dying in 1983, dying in and buried in Livingston County, Michigan.

Neither Lester nor Gerson had ever had children and thus have no descendants living today.  I never met Gerson or Lester, although I was two when Gerson died and seven when Lester died.  I had known virtually nothing about their lives before I started doing this research.

I did meet my great-uncle Harold, however. He had lived with his parents until they moved to Philadelphia in 1941 and had remained single.  When he was in his late 40s, he married May Gunther, and they had one child, my second cousin June.  Harold was in many ways a role model and mentor for my father.  He encouraged my father to pursue architecture, and my father took his advice and following in his footsteps, going to Columbia to study architecture.  Harold was not only a designer; he wrote poetry and painted.  He lived to 103, dying in 2004, in Montclair, New Jersey, where he had lived for almost eighty years.  Although I only saw him a handful of times, I remember him as a very gentle and kind man with a good sense of humor and a positive outlook on life.  I wish that I had been interested then in family history because he would have been an amazing source of information.

My Aunt Eva, my father, May and Harold Schoenthal 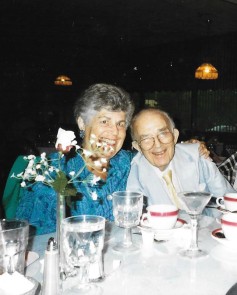 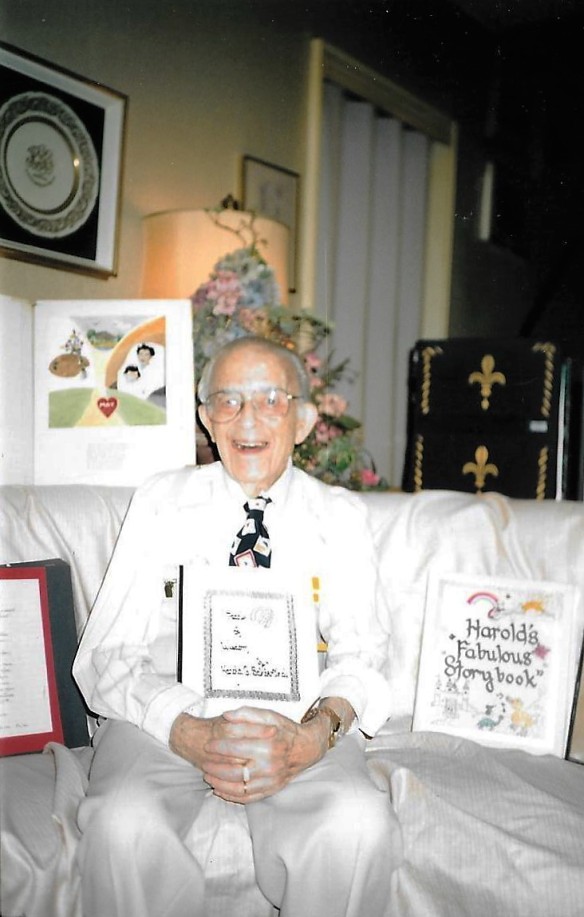 As for my grandmother, I knew almost nothing about her childhood before I started my research.  When I found the pictures and news stories about her in the Denver papers and in her high school yearbook, it made me think that she might have had a happy childhood growing up in Denver.  But her life was filled with challenges once she left Denver.  She was only eighteen and just out of high school when she married a man she had known for only half a year and who was nine years older than she was; within a year she had had a child and before she was twenty-three, she had two children.  She was living halfway across the country, far from her parents and two oldest brothers.  Only Harold was nearby.

Then her husband became disabled, and she just was not strong enough to deal with it all.  When she finally started getting her life back together in the early 1940s, she lost both of her parents within a year of each other. Soon thereafter both of her children became adults and left home.  She remarried in the 1950s to a very nice man named Frank Crocker who cared for her until she died in 1963 when she was 58 years old.

It was when she was married to Frank that I knew her, and we would see her a few times a year when we would make day trips to Philadelphia to visit. My clearest memory involves Frank more than my grandmother; he and I watched a Dodgers-Phillies game together on television during one of those visits, and if I remember correctly, Sandy Koufax was pitching.   I thought of that day when I saw last week that Sandy Koufax had turned eighty years old.

My memory of my grandmother is of someone who was fragile and insecure with a reserved and genteel presence.  But to be honest, I really did not know her well at all.  Doing this research has given me a somewhat fuller picture, and although she remains largely a mystery to me, at least I now know more about her brothers and her parents and the lives they led as well as more about her and her life. 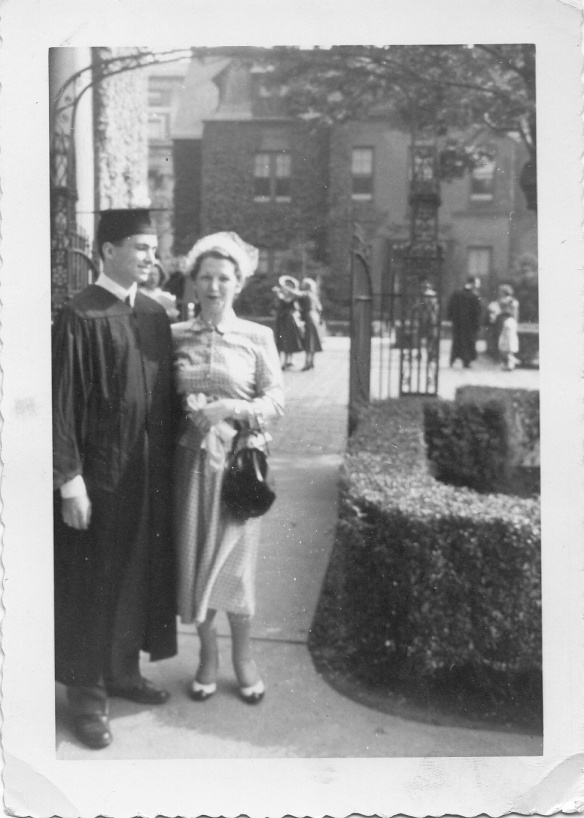 My father and my grandmother at his graduation from Columbia, 1952