Way back on July 22, 2014, when I first posted about the three Selinger men, I had speculated that they all had to be related.  Both Julius and Frederick had documents indicating that they had been born in Hurben, Germany.  Alfred and Julius had lived together in DC before they’d married, and Alfred had traveled with Julius and Augusta to Europe before he married Augusta’s sister Fannie.  But I had nothing to support that speculation besides that circumstantial evidence.

Then a month later on August 5, 2014, I wrote about the marriage of Eleanor Selinger to Henry Abbot.  Eleanor was the daughter of Julius Selinger and Augusta Cohen; Henry was the son of Hyams Auerbach (Abbot) and Helena Selinger (some records say Ellen or Helen).  I was curious as to whether Helena Selinger was somehow related to Julius and the other Selinger men, Alfred and Frederick.  I thought that she might be since how else would an American woman have met an Englishman? And the shared name seemed too uncommon to be pure coincidence.

As I wrote then, I had contacted the owner of an Ancestry family tree who turned out to be Eleanor Selinger and Henry Abbot’s great-niece: Val Collinson.  Val and I exchanged a lot of information, but we could not at that time find any definitive evidence linking Helena Selinger, her great-grandmother, to Frederick or Julius or Alfred.  All were born in Germany, but it seemed from the records in different locations.  Helena’s marriage record indicated that her father’s name was Abraham Selinger, whereas Julius had indicated on his passport application that his father was Sigmund Selinger.  We were stumped.  And that was that.  Or so I thought.

Fast forward a full year to August, 2015, when I received a comment on my earlier blog post about Eleanor Selinger and Henry Abbot from someone named Shirley Allen, whose grandparents were Jacob Rosenthal and Fanny Selinger:

I’ve been delving into my paternal (Rosenthal) family history. I’ve found that my grandfather Jacob Rosenthal was married to Fanny Selinger. Unfortunately I haven’t found anything further about Fanny other than she was born in Germany, probably in 1857. However, I’ve recently come upon a wonderful paper lace invitation to the 1873 wedding of Hyams Auerbach and Helena Selinger that you referred to. What I don’t know is why Fanny would have been invited. Clearly she and Helena were related – but how ?

Needless to say, I was intrigued.  Maybe Fanny Selinger was related to Helena and/or maybe she was related to Julius, Frederick, and Alfred.  Shirley and I communicated by email, and we both started digging.

I found a website called Jewish Genealogy of Bavarian Swabia (JGBS) that had records for Hurben and located 25 Selingers in their database, including those for Alfred and for Julius, who were the sons of Seligman Selinger and Breinle Hofstadter and thus were brothers, as I had suspected. Shirley and I both thought that Seligman Selinger had been Americanized to Sigmund by Julius on his passport application and that the birth records for Julius and Alfred confirmed that they were in fact brothers.

I also found a birth record for Helena Selinger, whose father was Abraham Selinger, not Seligman Selinger.  Abraham and his wife Rosalia Wilhelmsdoerfer had six children listed: Seligman (1842), Raphael (1843), Pauline (1845), Karolina (1847), Heinrich (1848), and Helena (1849). Pauline, Karolina, and Heinrich had all died as young children, leaving Seligman, Raphael, and Helena as the surviving children of Abraham.  Here is Helena’s birth record from Hurben in August 1849.

But what about Frederick?  And Fanny? And was there a connection between Helena’s father Abraham and the father of Julius and Alfred, Seligman Selinger?

A little more digging on the JGBS site revealed that both Abraham Selinger and Seligman Selinger were the sons of Joachim Selinger, thus confirming that they were brothers and thus that Helena was a first cousin to Julius and Alfred.

That meant that Eleanor Selinger, daughter of Julius Selinger, had married her second cousin, Henry Abbot, son of Helena Selinger.

But that still left us wondering about Frederick Selinger and Shirley’s great-grandmother Fanny Selinger.  How did they fit into this picture?

I contacted Ralph Bloch, the webmaster for the JGBS website, and he was extremely helpful.  More helpful than I realized at the time, but more on that later.  Ralph also could not find any evidence that Fanny was born in Hurben, and he reassured me that the birth records for Hurben were quite complete.  He even searched through the original pages to be sure that Fanny hadn’t somehow been missed when the records were indexed. (There was a Fany Selinger born in the 1830s, but that would have been far too early for Shirley’s ancestor.) Ralph also sent a photograph of Seligman Selinger’s headstone, which confirmed that his father’s name was Joachim or Chaim, his Hebrew name.

So once again we hit the brick wall.  We still had not found either Frederick or Fanny.  Shirley said she would pursue it on her end, and I turned back to the other research I’d been doing when I received Shirley’s comment.

Not much happened again until late November when I heard again from Shirley, telling me that she had received a copy of Fanny Selinger’s marriage certificate, which revealed that Fanny was the daughter of Abraham Selinger.  Now we could link Fanny to Helena, also the daughter of Abraham, as well as to Julius and Alfred, Abraham’s nephews. But we didn’t know if Fanny and Helena were both the daughters of Rosalia Wilhelmsdoerfer.

Shirley’s research of UK records showed that by 1871 Abraham was married to a woman named Gali, and we assumed that Abraham had left Hurben at some point, that his first wife Rosalia had died, and that he had had several children with Gali.  That is what the UK census records from 1871 seemed to reflect. Abraham and Gali were living with Sigfried (28), Helena (20), Cornelia (18), and Oskar (4).  But there was neither a Fanny nor a Frederick. 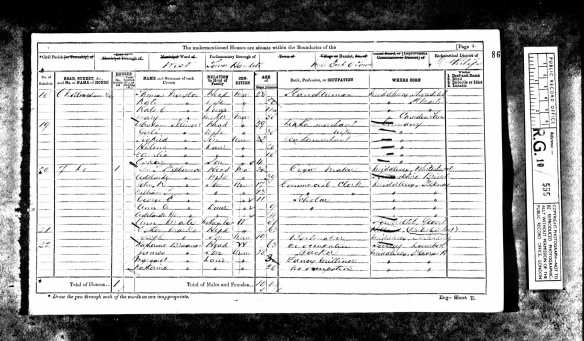 Abraham died in 1880, and in 1881, Gali was living with four children, but aside from Oskar (13), they were all different from those on the 1871 census: Morris (28), Flora (surname Wallach) (25), and Sidney (23).  Now I was really confused.  Who were these people, and where had they been in 1871?  Flora was presumably married to someone named Wallach and now a widow, but Morris would have been eighteen in 1871 and Sidney only thirteen. Where were they living?  Who were they? None of those children were listed on the Hurben birth register on the JGBS site; in fact, there were no children listed for Abraham Selinger and any wife in Hurben after Helena’s birth in 1849.

I assumed that Morris, Flora, Sidney, and Oscar, all born after 1850, were born in a different place and perhaps to a different mother.  Certainly Oskar had to be Gali’s child since he was so much younger than all the rest and only four on the 1871 census.

Searching again on Ancestry, I found a new record:  an entry for Abraham, Rosalia, Seligman, and Raphael Selinger on the Mannheim, Germany, family register dated November 26, 1848.  What were they doing in Mannheim? By that time the three younger children, Pauline, Karolina, and Heinrich, had died.  Perhaps they needed a change of scenery.  But what about Helena? She was born in Hurben in 1849.

Then I found a second Mannheim family register that included Helena, the final entry on the page:

My friends in the German Genealogy group,  Heike Keohane, Matthias Steinke, and Bradley Hernlem, came to my rescue and translated it to read, “Helene, his daughter, here born the 22 August 1849.”  So Helena’s birth is entered on the Hurben birth records (on the same date) and on the Mannheim records.  I’ve no idea which is the correct birthplace; maybe Rosalia went home to Hurben to give birth and returned to Mannheim afterwards where the family was living.

But perhaps now I could find out where Frederick was born, not to mention Morris, Flora, Sidney, and Oscar. Maybe they were born in Mannheim.  I checked the Mannheim birth records from 1853 through 1866 and found not one person named Selinger.  I checked over and over, looking at each page until my eyes were blurry.  There were no Selingers born in Mannheim during that period that I could find.

Then I discovered that Oskar Selinger had listed Ansbach as his birth place on his UK naturalization papers and thought that perhaps the family had moved from Mannheim to Ansbach.

I had no luck locating Ansbach birth records for that period, and by then it was Thanksgiving, and other matters distracted me, and I put the Selinger mystery on the back burner.

17 thoughts on “The Benefits of Teamwork: Part I”