By 1885, Samuel Katz, my first cousin three times removed, had moved to Omaha, Nebraska, from the small town in Kentucky where he’d first settled after immigrating from Jesberg, Germany. What took him to Omaha, and what was he doing there?

After Irish-born James E. Boyd founded the first packing operation in Omaha in the 1870s, thousands of immigrants from central and southern Europe came to Omaha to work in the Union Stockyards and slaughterhouses of South Omaha. They created Omaha’s original ethnic neighborhoods… The Near North Side also developed greatly during this period, with high concentrations of Jews and Germans, and the first groups of African Americans. …Omaha’s growth was accelerated in the 1880s by the rapid development of the Union Stockyards and the meat packing industry in South Omaha. …There were several breweries established throughout the city during this period. 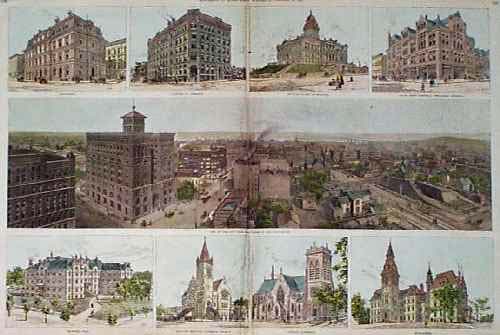 Not only was Omaha a booming economic center in the 1880s, it also had an established Jewish community.  Temple Israel, the oldest synagogue in Nebraska, provides this history of the Omaha Jewish community on its website:

The first Jewish settlers, mostly merchants and businessmen, arrived in Omaha in 1856. …During the early 1860s, Jewish religious services in Omaha were conducted by laymen including Max Abrahams, grandfather of Milton R. Abrahams, who would become president of Temple Israel in 1942.

In 1871, the Congregation of Israel was founded …. Recognizing the need for a Jewish burial ground, five acres for a cemetery at 42nd and Redick were purchased and deeded to the congregation. During the summer and fall of 1871, Reverend Alexander Rosenspitz served the congregation and conducted the first Confirmation Service for a class of seven. The next year, a short-lived Sunday School was organized. Articles of incorporation were filed with the Douglas County Clerk in 1873. … Enthusiasm and dedication kept the tiny congregation viable. But all money raised was designated for a building leaving little for a rabbi’s salary. Finally, a lot was purchased at 23rd and Harney for $4,000. Reverend George Harfield was hired as rabbi in 1883 and on September 18, 1884, the 50-member congregation dedicated the first synagogue in Nebraska. It had been built for $4,500.

Thus, Omaha would have been an attractive location for a Jewish merchant like Samuel Katz.  He did not, however, strike out all alone with his wife and son and move to Omaha; his wife Lorena’s sister, Bella Rothschild Pollock, and her husband Alexander Pollock had settled in Omaha as early as 1871; by 1880, Lorena’s brother Lafayette had also settled there. And during the 1880s, Lorena’s parents and her sisters Annie and Minnie moved there as well. So Samuel Katz was led to Omaha by his wife’s family.

Now what did he do there? That proved to be a difficult question to answer. I searched for Samuel in every Omaha directory from 1880 through 1912 to try and find answers to that question. 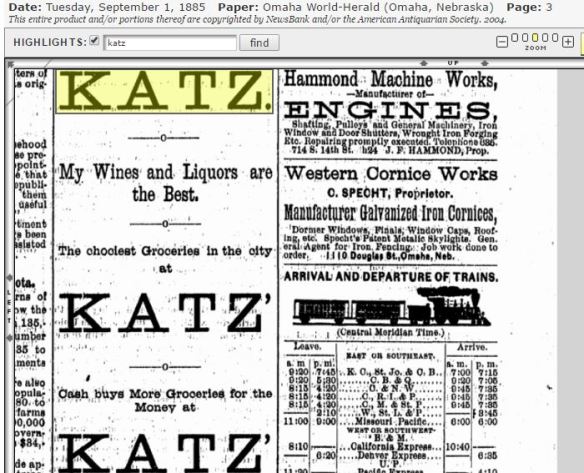 By 1887 there was only one Samuel Katz listed in the Omaha directory; he was working for a real estate business called Katz & Company and residing at 2106 Farnam Street, the same address where the grocer had been living the year before.   I thought this must have been “my” Samuel and that he had moved to the real estate field.

But there was a Miss Minnie Katz living at the same address who was a music teacher as well as a Miss Annie Katz.  Samuel did not have a wife or a daughter or a sister named Minnie or Annie, so who could they be? I was mystified.

Then I remembered that Lorena had sisters named Minnie and Annie, and they certainly could have been living with Samuel and Lorena.  Perhaps the directory erred by listing them with the surname Katz instead of Rothschild?

A check of the 1888 Omaha directory answered my question:

Annie and Minnie Rothschild were listed as living at 2113 Douglas Street, along with their father William and their brother Lafayette; Minnie was a music teacher.  Now I knew that Samuel Katz and his family were all living with Lorena’s parents and siblings in the same home at 2113 Douglas Street in 1887. The 1887 directory had simply assigned the wrong surname to Minnie and Annie.

In 1888 Samuel Katz was listed as a general agent for real estate for Manhattan Life Insurance Company, residing with his in-laws at 2113 Douglas Street.  And in 1889 the Samuel Katz living on Douglas Street (now 2111) was working for Polack Clothing Company, the same company that employed his brother-in-law Lafayette. This was presumably the business of Alex Pollock (as it was later spelled), brother-in-law of both Samuel Katz and Lafayette Rothschild.

Samuel Katz of 2111 Douglas Street continued to be listed with Katz-Nevens-Rees in the Omaha directories for each year between 1890 and 1895, although in 1895 there was a second listing for a Samuel Katz who was a grading contractor living on 11th Street.  Every directory from 1895 up to 1899 had these two listings for Samuel Katz, but which one was my relative—the clothing manufacturer at 2111 Douglas Street or the grading contractor at 11th Street?

On the 1900 census my Samuel Katz was living at 2111 Douglas Street—that is, the address of the Samuel Katz who was the clothing manufacturer with Nevens and Rees, according to the Omaha directories.

Samuel Katz’s occupation on 1900 US census

But there were more mysteries to be solved, such as who was Bertha Katz, residing at 2111 Douglas Street and working as a stenographer for Katz-Nevens? And how did Samuel Katz end up in two very different businesses?

19 thoughts on “What Was My Cousin Doing in Omaha?”