On Monday morning, May 8, we picked up our rental car (a cute little Nissan Juke) and started our drive northeast from Cologne to the Kassel region where we would spend the next three days.  I must admit I had some trepidation about driving in Germany (well, about Harvey driving in Germany; I certainly wasn’t going to drive).  I’d heard about the absence of speed limits on the Autobahn, and being a nervous passenger under any circumstances, I had visions of a combination of bumper cars and roller coasters.  Add to that the fact that the signs would be in German and distances in kilometers, and I figured this would not be a relaxing experience.

But I was wrong.  Our GPS was excellent (with a delightful British accent), the signs were clear, the roads were smooth, and we somehow managed to keep up (to some extent) with the pace of the German drivers.  The only part I didn’t like was the fact that the vehicles in the right lane were going about 30 mph slower than those in the left lane, making changing lanes at times nerve-wracking (for me, not for Harvey).

We made one visit to a rest stop along the way where I ran from the car to try and get ahead of the three busloads of teenagers going on a school trip.  I was only partly successful and had to wait amid a bunch of chatty teens before paying 70 cents to use the facilities.  When I received a voucher back for 50 cents, I had to ask one of the girls what it was for.  I learned we could redeem it for items in the rest stop store, so we bought a pretzel for the road and re-entered the Autobahn.

Our destination was Volkmarsen where we were to meet Ernst Klein, who would be our guide for the towns we were visiting that day. We arrived on time, and Ernst promptly met us in front of the rathaus (town hall) in the pretty center of the village. I had only emailed a few times with Ernst beforehand, and he had told me that his English was not great, but he was wrong.  His English was excellent, and I immediately warmed to this friendly and modest man. 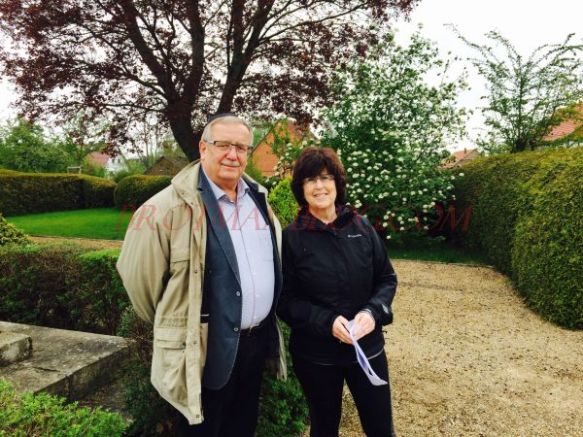 Ernst Klein and me

First, he showed us around Volkmarsen. I was at first not sure why I would be interested in Volkmarsen since, as far as I knew, I had no family from that town.  But Ernst pointed to a building right across from the rathaus and told us, showing us a photograph, that it had once been the store of Salomon Hamberg. I had to look him up to figure out the connection.  His father Juda Hamberg was a first cousin to my great-great-grandmother, Henrietta Hamberg, the mother of my great-grandfather Isidore Schoenthal. So Salomon was Isidore’s second cousin. 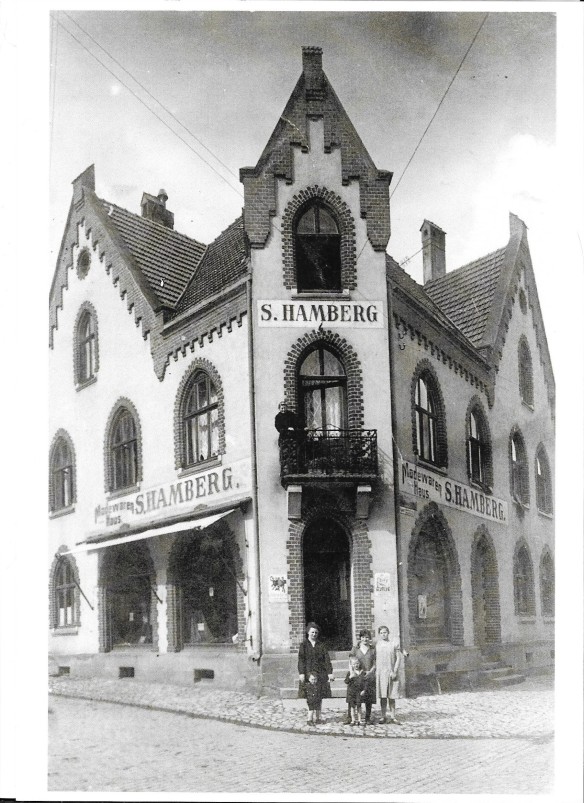 Building where Salomon Hamberg once had a store

Ernst showed us the church in Volkmarsen and pointed out that several former Jewish homes were right nearby; he commented that before the Third Reich, Jews and Christians had lived and worked together peacefully as neighbors and friends. We then walked to one of the older homes in town where Ernst wanted to show us something special that he had discovered. 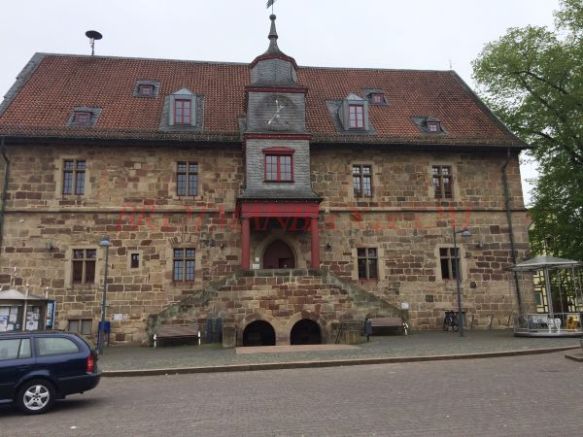 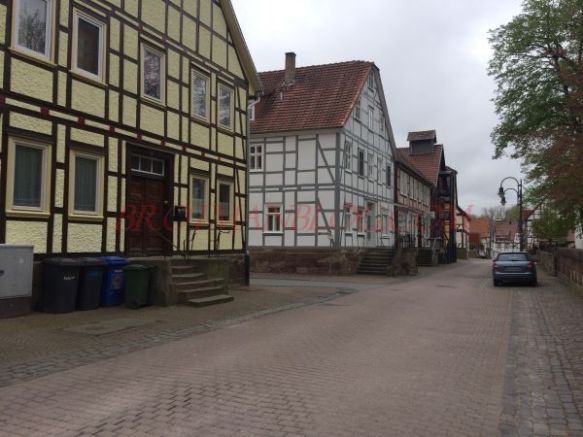 Street in Volkmarsen where some Jewish families once lived

We went into the backyard of the home and entered a door into the basement at the back of the house.  It was dark inside, and I had no idea what we were going to see.  But Ernst turned on a spotlight that lit up a corner of the basement where we could see stone steps leading down into a rectangular opening—a mikveh!  A mikveh is a ritual bathing place where  traditional Jews go for a ritual purification at particular times in their lives—e.g., for women, before marriage and after each menstrual period. Ernst said he had had the stones dated by an expert and that it was believed that this mikveh was 500 years old, meaning Jews had been in this little town as early as 1500.  There is even visible water at the bottom, showing that natural waters could fill the mikveh.

He then told us how he had discovered the mikveh.  He had been looking for some evidence of an early Jewish community in Volkmarsen in the older buildings and homes in the village, and when he saw this decorative pillar in the basement of this home, he had a hunch that the basement had once been used for something special.

Pillar in basement where mikveh was found in Volkmarsen

He asked the owner for permission to remove the brick flooring to see what was underneath, and the owner agreed, as long as Ernst promised to restore the flooring if there was nothing below it.  But there was, and further investigation indicates the possibility that the front part of the basement was used for prayer services.  There are marks on the walls that look like hand prints and Hebrew letters as well as an opening in the wall that might have housed the Torah scrolls. 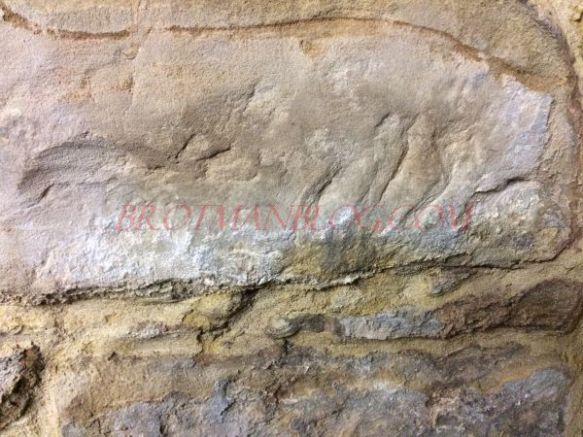 Handprints on wall in Volkmarsen 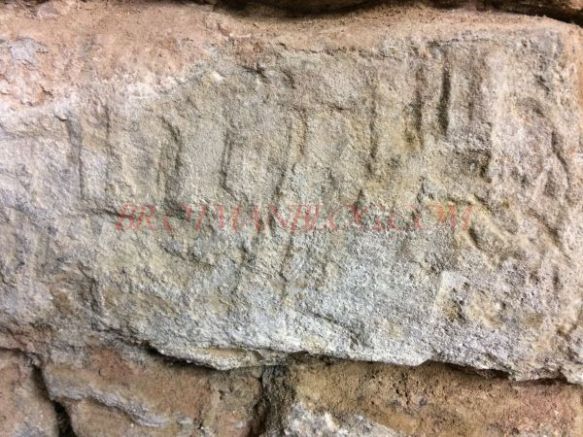 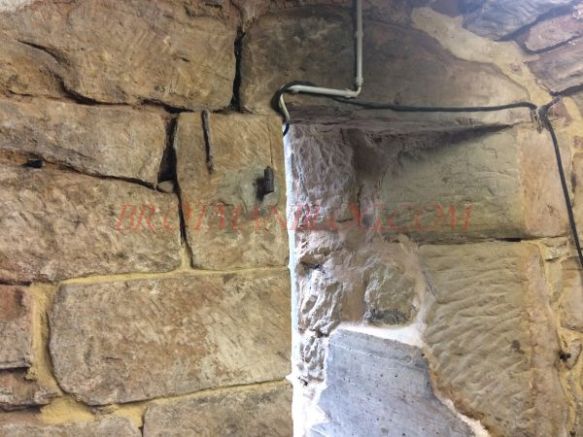 We were very excited to see this space and wondered what would happen to it since the home is privately owned. Ernst described his hope that his organization could raise the funds to buy the house and convert it into a Jewish museum. I am hoping to help them accomplish this goal, and if you are interested in learning more about this fascinating project, here is more information from their website. I believe that this museum will serve a very important purpose in education and preservation of the Jewish history of the region, and I hope some of you will consider making a donation. 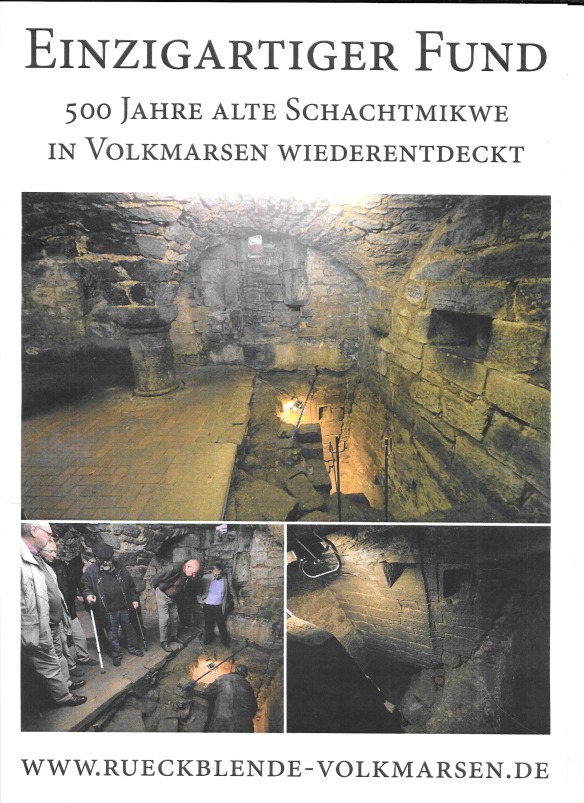 After a quick lunch at yet another great German bakery, we went to see the Volkmarsen cemetery.  The cemetery had been damaged by the Nazis during the war, the headstones smashed to pieces.  A memorial has been established by assembling pieces of the stones together along with a large stone commemorating those who had been buried there.

Broken stones at the Volkmarsen cemetery

Memorial made of broken stones at the Volkmarsen cemetery

In addition, Ernst saw that a memorial wall was created to include the names of Volkmarsen residents who had been killed during the Holocaust.  The empty spaces in the wall are meant to represent the holes now missing from the community, a brilliant and very powerful visual statement.

Memorial to those killed in the Holocaust from Volkmarsen

Ernst then took us to the current Jewish museum in the town, and I could see why he needs more space. He and his colleagues have created an incredible little museum packed with information and Judaica and photographs and records of Jewish history in the area.  The museum is visited by children and adults from the region and also from all parts of the world. There are copies of photographs and letters of members of the Hamberg family, including some of Rob Meyers’ mother and her family. (Rob is my fifth cousin, the one with whom we have very good mutual friends as well as mutual cousins from my father’s Cohen side, the Goldweins.)

Then we left for Breuna, the village where my great-great-grandmother Henriette Hamberg was born. Henriette was the daughter of Moses Hamberg and Guetchen Rotenberg, both of whom had died in Breuna in the 1860s. Henriette was one of ten siblings and at least some of her siblings had stayed in Breuna and died there.   Although I have yet to delve too deeply into the Hamberg genealogy and story, I wanted to see where they’d lived and where they are buried.

On the way to Breuna, Ernst had us pull over to the side of the road so we could see the small mountain that was the inspiration for the family name.  In the early 1800s when the government ordered Jews to adopt surnames for tax-collecting purposes, many Jews picked names based on locations or places that they knew.  Moses Hamberg’s family chose the small mountain outside of Breuna that was and is known as Hamberg. 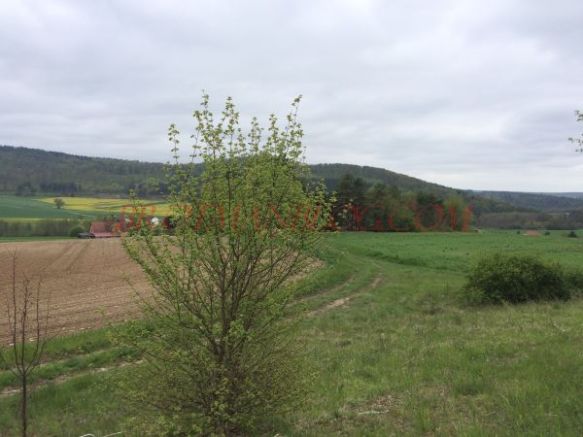 Breuna is a small village not dissimilar from Volkmarsen or Gau-Algesheim.  There is a church, a small open square, a town hall, and then many individual houses surrounding those public buildings. Ernst showed us the former synagogue, noting its proximity to the church, and two houses that were once the homes of Hamberg family members.

Plaque on former synagogue in Breuna 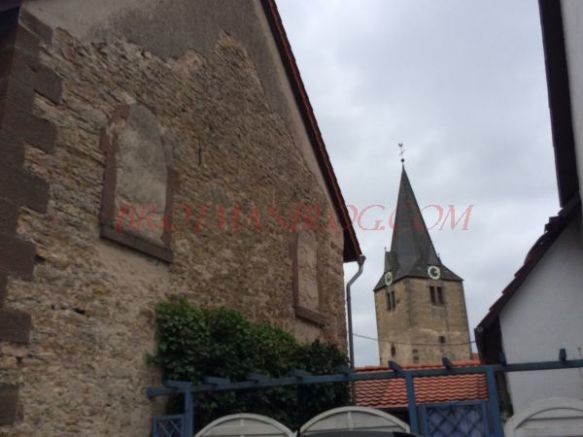 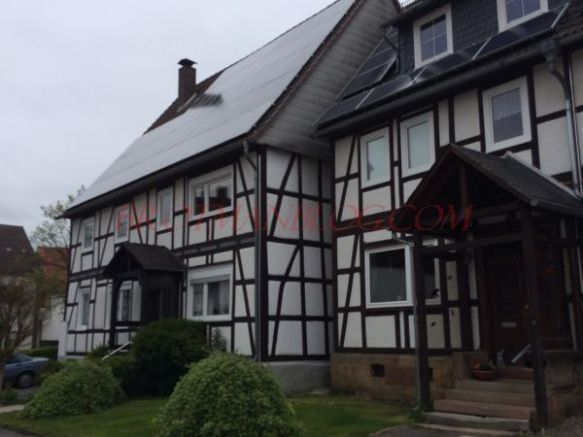 The weather that day was the coldest and wettest of our days in Germany, and unfortunately we were too uncomfortable to spend much time walking around.  So we headed to the cemetery.  Along the way we passed the street named for Susanne Hamberg, Rob Meyer’s aunt who was, along with her parents, killed in the Holocaust. Susanne was only thirteen years old; she was my fourth cousin, once removed.

Outside the cemetery was a sign telling the history of Breuna’s Jewish community. It includes the Hamberg family as one of the families that made up that community.

Inside the cemetery are many stones in about six or seven different rows.  It is quite a nice cemetery and very well maintained.  Many of the stones are only in Hebrew and somewhat eroded, so reading them was extremely difficult, but fortunately many stones also have German on the reverse side, revealing the secular name of the person buried in that spot. I looked at each stone, often seeing nothing that seemed relevant, and occasionally seeing a name that seemed a possible relative—a Goldschmidt or a Hamberg.

But my search was rewarded when I located these two stones:

Hebrew side of stone for Guetchen Rotenberg Hamberg 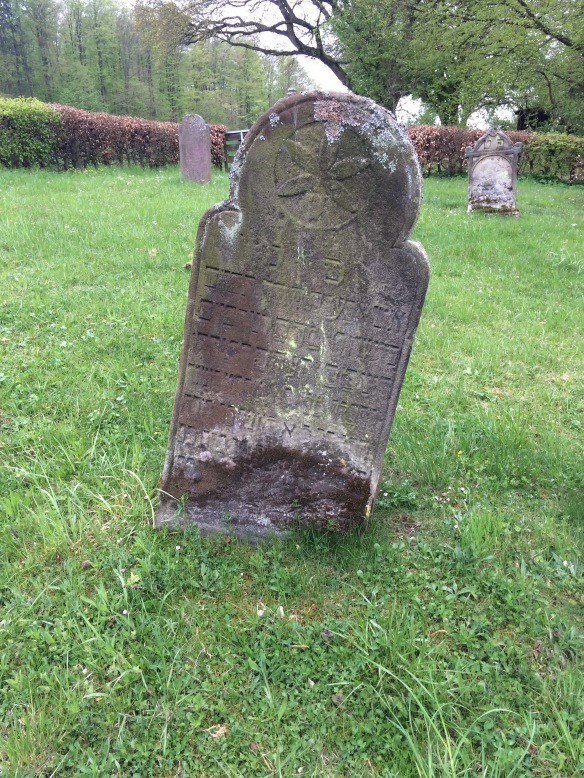 On the reverse were their German names:

I never knew these people and in fact knew almost nothing about them beyond their names, birth dates, and death dates.  The birth record of their daughter Hannchen revealed that Moses was a cattle merchant.  Despite this thin amount of personal information, somehow I felt a connection to these people who died almost a hundred years before I was born.

In the cemetery there were also a number of stones for other people on my Hamberg family tree:

Jettchen Gans Hamberg, wife of Seligmann Hamberg, brother of my great-great-grandmother Henriette Hamberg.  Jettchen and Seligmann were the parents of Malchen/Amalia Hamberg who married Jacob Baer and had the children who founded and worked for the Attleboro Manufacturing Company, the large jewelry business in Attleboro Massachusetts.

Baruch Hamberg and his wife Sara Herzfeld.  Baruch was my second cousin, three times removed; more importantly, he and Sara were my cousin Rob Meyer’s great-grandparents.  Baruch was also related to Joel Goldwein as Baruch’s mother Breine Goldwein was the sister of Joel’s great-grandfather Markus Goldwein. 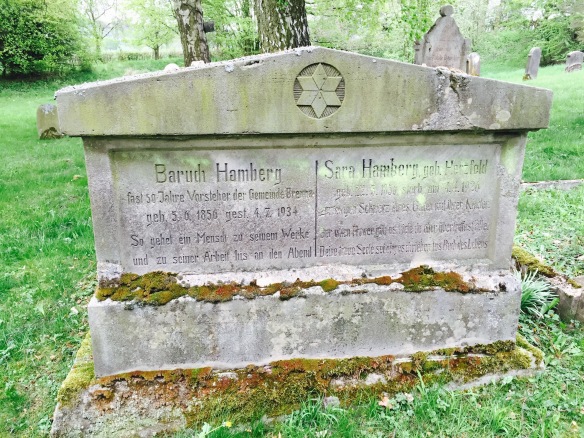 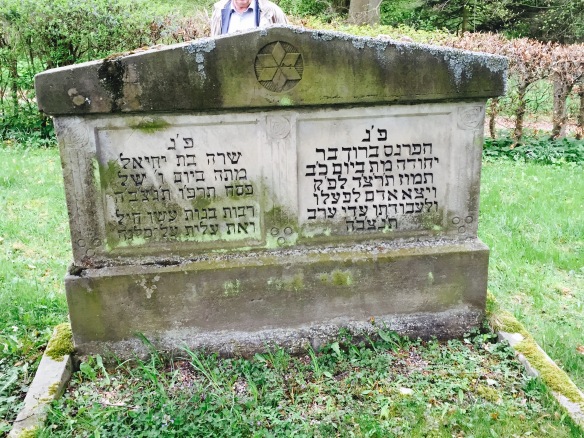 In addition there were some stones with names that might be a part of my family and then others that I need to have translated.  But overall, visiting that cemetery on that very cold and very dreary day left me feeling uplifted and strangely happy.  My ancestors were there, and I had been there to pay tribute and to remember them.  It was a very moving experience.

We drove through Oberlistingen, the home of my Goldschmidt ancestors, and then we said goodbye to our new friend Ernst—he and I both with tears in our eyes—and drove to our hotel in Kassel.  It had been a remarkable day, beginning with a 500 year old mikveh and ending with the discovery of my 3x-great-grandparents’ gravestones.  The next day we would go to Sielen, the home of my Schoenthal ancestors.

24 thoughts on “Volkmarsen and Breuna: A Remarkable Day”