Back in May, I wrote about the sad saga of Charles Hamberg and his son Samuel Hamberg.  Charles, my great-grandfather Isidore Schoenthal’s first cousin, had lost two wives—one was murdered, one died quite young.  He had then committed suicide, leaving his nine year old son Samuel an orphan.  Charles’ estate was administered by another cousin, Amalia Hamberg Baer, who at the time was living in western Pennsylvania where my great-grandfather and many other Hamberg relatives were then living.

In fact, Amalia (born Malchen) was a first cousin to Isidore Schoenthal, my great-grandfather:

She had come to the US from Breuna, Germany, in 1871, and had married Jacob Baer in 1873, according to the 1900 census. (For more on how I linked Amalia Hamberg to Jacob Baer, see my earlier post.)  Jacob was born in the Rhein Pfalz[1] region of Germany in about 1851 and had immigrated to the US in 1867, according to several census records.  From entries in the Pittsburgh city directories, he appears to have settled in the Pittsburgh area. 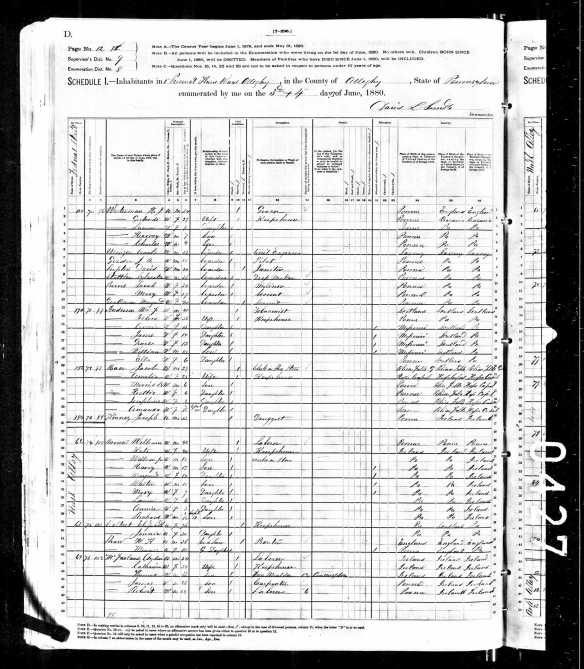 Between 1880 and 1891, they would have five more children: Flora (1882), Tilda (1884), Elsie Victoria (1886), Alfred (1889), and Lawrence (1891). (The birth years for the daughters as reported in various records are all over the place as they kept making themselves younger as the years went on, so I am relying on the 1880 and 1900 census records when they were still probably young enough not to lie about their ages.)  During those years, Jacob was listed as a salesman in the Pittsburgh city directories.

In 1900, Jacob and Amalia were still living in Allegheny with all nine of their children.  Jacob continued to work as a salesman, as did their son Maurice (Morris here, now 26).  Hattie (24) and Josephine (Josie here, now 21) were working as stenographers.  The rest of the children were not employed.

In the next decade many of the children began to move on to their own lives.  In fact, even before 1900, Maurice, the oldest child, had ventured quite far from Pittsburgh.  As I will write about in a post to follow this one, Maurice moved to Attleboro, Massachusetts,[2] and established a very successful jewelry business in which four of the siblings’ families would be involved, that is, Maurice, Tilda, Elsie, and Lawrence.  This post will focus on the other five siblings—Hattie, Josephine, Flora, Amanda, and Alfred—and their parents, Amalia and Jacob.

On July 17, 1905, Hattie Baer, the second child who was then 29, married Meyer Herman, a clothing salesman living in Philadelphia who was born in Manchester, England.

They settled in Philadelphia, where they had two sons, Justin Baer Herman, born in April, 1907, and Richard B. Herman, born in July, 1910.  Then tragically, Hattie died on October 15, 1910, of a perforated bowel and peritonitis.  She was only 33 years old when she died, and she left behind a three year old toddler and a two and a half month old infant son.

Five years later in 1915, Hattie’s younger sister Amanda married her brother-in-law Meyer Herman in Philadelphia and took on the responsibility for raising her two nephews, Justin and Richard, then just eight and five years old.  In 1920, Meyer was still a clothing salesman, and the family continued to live in Philadelphia. 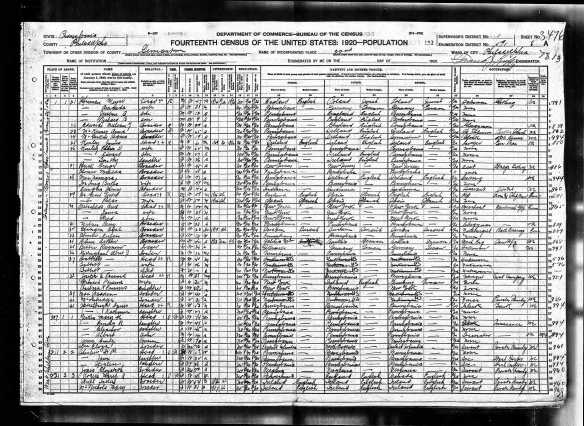 Ten years later in 1930, Meyer had moved from being a salesman to being the owner of a clothing manufacturing business.  The two sons were also working; Justin, now 23, was a newspaper editor, and Richard, now 19, was selling real estate.  Both were still living at home with Meyer and Amanda in Philadelphia.

Meanwhile, the third child of Amalia and Jacob Baer, Josephine, had married Morris Alon Green on January 2, 1906.  Morris was a Pittsburgh native, born there on February 17, 1875, the son of Abraham Green, an immigrant from Holland, and Jeanette Bloomberg, born in Germany.  In 1900, Morris was living with his parents in Pittsburgh and working as a bookkeeper.

Josephine and Morris settled in Pittsburgh where their son Alan Baer Green was born on October 30, 1906.  In 1910, the Greens were living in Pittsburgh as boarders in the household of another family, and Morris was working as a claims agent.

The next several years must have been successful ones for Morris because by 1918, he was the general agent and executive of the Crucible Steel Company and by 1920 he and Josephine and their son Alan were living in their own (rented) home with a nurse and servant residing with them.

By 1925, Josephine and Morris had left western Pennsylvania for New York City, where they were living at the Hotel Alexander at 150 West 103rd Street.  Their son Alan is not listed as living with them; perhaps he was away at college as he would have been nineteen at that time.  In 1930, Alan was living with his parents in Manhattan, working in advertising.  His father Morris listed his occupation/industry as “financial.” 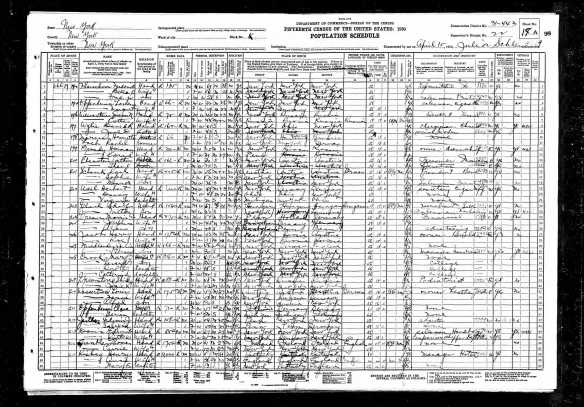 The fifth child of Amalia and Jacob was Flora.  In 1907, she is listed in the Pittsburgh city directory as a teacher, residing in Bellevue, a town near Pittsburgh. In 1910, when she was 28 (although listed as 24 on the 1910 census), she was still single and living with her parents and not employed outside the home.

In 1915, she married Julius Adler.  Julius was the son of Simon Adler, a German immigrant who in 1880 was living in Memphis, Tennessee, working in a shoe store.  Julius’ mother Elizabeth was a native of Missouri; she married Simon in 1881, and they had four children born in Memphis between 1882 and 1887, when their youngest son Julius was born.  By 1900, the family had relocated to Philadelphia.

According to his obituary, Julius graduated from the University of Pennsylvania with a degree in engineering in 1908.  In 1910, he was teaching at the University of Washington in Seattle.  But by 1915 he had returned to Philadelphia, where he married Flora Baer.  In 1917, they were living in Harrisburg, Pennsylvania, where Julius was working as a civil engineer for the state highway department.  They would have three children, Stanley, Jerrold, and Amy, born between 1917 and 1920.

In 1920, the family had returned to Philadelphia, where Julius was now employed as a technical engineer for an oil company.  According to his obituary, during the 1920s, Julius was working as the deputy chief of the Philadelphia highway department and was involved in supervising the construction of the Benjamin Franklin Bridge, the bridge that spans the Delaware River connecting Philadelphia to Camden, New Jersey (originally called the Delaware River Bridge).  In 1930, Julius and Flora and their two sons continued to live in Philadelphia, Julius working as a civil engineer. Alfred, the second youngest child of Amalia and Jacob, was the only other child not involved with the Attleboro jewelry business.  In 1900, he was living with his family in Pittsburgh, but he is not listed with them in 1910, when he would have been 21 years old.  There is an Alfred H. Baer listed in the 1907 Pittsburgh directory, working as a clerk, but I am not sure that that is the same person.  According to his registration for the draft in World War I, Alfred was living in a sanitarium and “mentally incapacitated for work of any kind.”

Five years later, at age 34, Alfred died on December 13, 1923.  He was buried where his sister Hattie was buried and where later his parents, his sister Flora, and his brother Maurice would be buried at Mt. Sinai cemetery in Philadelphia. I was unable to locate a death certificate, so I do not know the cause of death.  According to his burial record, he was residing in Stamford, Connecticut, at the time of his death.

Thus, by 1930, Amalia (Hamberg) and Jacob Baer had lost two of their children, Hattie and Alfred. Their other children were doing quite well.  Amanda and Flora had moved to Philadelphia with their husbands and children, and Josephine was living in New York City with her husband and son.  The other four children were also living away from Pittsburgh, as we will see in the next post.

Even Jacob and Amalia had left Pittsburgh by that time.  In fact, sometime between 1918 and 1922, they had moved to Atlantic City.  In 1922, they were listed in the Atlantic City directory, living at The Amsterdam in Atlantic City.  The following year on March 27, 1923, their children honored their parents on the occasion of their 50th wedding anniversary with a dinner at the Esplanade Hotel in New York City.

In 1930 Jacob and Amalia, now 83 and 79 (although the 1930 census says 77), were living at 250 West 103rd Street in New York City, with Jacob listed as the head of household for what appears to be a small hotel; there are 28 guests listed as living with them.  Their daughter Josephine was living not too far away at 666 West End Avenue.

Amalia Baer, born Malchen Hamberg in Breuna, Germany, died on April 23, 1931, in New York City.  She was 80 years old.  She was buried in Mt. Sinai cemetery in Philadelphia where the two children who predeceased her, Hattie and Alfred, were buried.  A year later her husband Jacob died on September 1, 1932.  He was 85 years old, and he was buried with his wife and children in Mt. Sinai cemetery.  His death notice ran in the September 3, 1932 issue of The New York Times:

In my next post, I will write about the four children of Amalia and Jacob who were involved in the jewelry business in Attleboro, Massachusetts.  Then in a subsequent post I will report on what later happened to the children and the grandchildren of Jacob and Amalia (Hamberg) Baer.

[1] Thank you to Michael Palmer and Cathy Meder-Dempsey of the German Genealogy group on Facebook for helping me decipher Jacob’s birthplace.

[2] I am not sure why Maurice is listed as living in Pittsburgh on the 1900 census as several reports indicate he had established the business in Attleboro before then.  Perhaps he was still traveling back and forth between Pennsylvania and Massachusetts at that time.

19 thoughts on “The Family of Amalia Hamberg Baer, the Administratrix”