After spending the prior day in Volksmarsen and Breuna, home of the Hambergs, I was excited to go to Sielen, the home of the Schoenthals.  We were going to meet two people in Sielen, Julia Drinnenberg, with whom I’d only exchanged a few emails, and Hans-Peter Klein, with whom I’d been in touch for a couple of years.  Hans-Peter and Ernst (not related to each other) created the Juden in Nordhessen website that has provided me with extensive information about my Hessen ancestors.  When I was researching the Schoenthals, Hans-Peter was a tremendous help.  He also knew my friend from home, Amanda, so I was looking forward to meeting him and Julia.

Sielen is about forty minutes from Kassel, the city where we were staying, and the drive was quite scenic.  We went over the mountain (hill?) where the Kassel fortress is, then along a winding and narrow road, and then through beautiful countryside.  As we approached Sielen, there was a flock of sheep grazing in the field on the edge of the village.  I decided to get out and take some photographs of the surrounding area.

Countryside outside of Sielen

As I was doing that, another car pulled up alongside me, and a man got out and asked me if I was Amy.  It was Hans-Peter, and we both laughed at the fact that he knew it had to be me, given how small and isolated Sielen is.  We both drove into the village where Julia soon appeared as well. She was also outgoing and friendly, and we all hit it off right away.

As in the other towns and villages, there was a marketplace and a church. But Sielen is much smaller.  Whereas Gau-Algesheim has a population of about 7000, Volksmarsen about the same, and Breuna almost 4000, Sielen’s population is only about 500 people.  It was the smallest village we visited.

While we were all getting acquainted, a man appeared in the marketplace where we had parked, yelling in German.  Harvey and I were both a bit intimidated, but after some discussion with Hans-Peter and Julia, the man left.  Apparently we had driven up to the marketplace the wrong way. 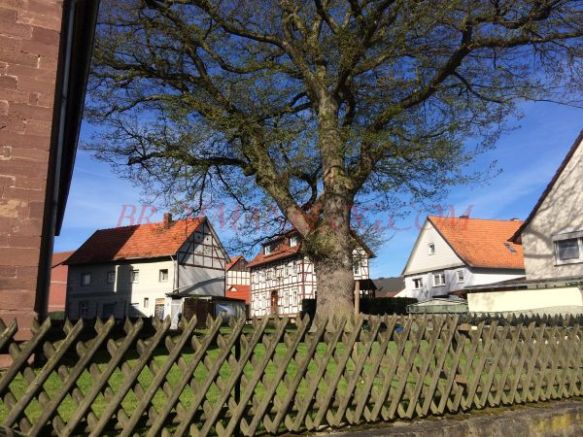 Julia had some historical information about Sielen to share with us.  According to a 1789 report on Sielen by J. Chr. Martin entitled “Topographical and Statistical News of Nether Hessen, Goettingen (1789, p. 103, as translated), at that time there were 114 homes in Sielen and about 500 residents: “106 men, 112 women, 128 sons and 123 daughters, 14 servants, 14 maidens.” In terms of livelihoods, the report noted that there were forty farmers, 76 peasants, seventeen “cloth-weathers,” one blacksmith, one wainwright, one tailor, and two carpenters.  The report adds, “Also there are two Jewish families who make their living by trading.” I had to wonder whether my Schoenthal ancestors were one of those two families.  Levi Schoenthal, my great-great-grandfather, was born there in 1812, so perhaps his father Heinemann was already living there by 1789.

Julia’s papers also included a later report about Sielen, written in 1932-1934, around the time that Hitler came to power.  This document, written by Superintendent I.R. Brandt and titled “Chronicle of Sielen,” provides some insight into the status of Jews at that time.  It can be found at the Landeskirchliches Archiv Kassel, D 2.2 Hofgeismar v.O. HS 22. There were two Jewish families left, one being an elderly woman named Perle Herzstein, whose house was attached to the old synagogue.

The report goes on (p. 109)(as translated in the document Julia gave me):

Inside it is desolate, there aren’t any church services for a long time. But the old keeper of bygone splendor [Ms. Herzstein] shows us proudly the marvelous tora-rolls, man-high and from thick parchment, lovely as on its first day. And she shows us the colorful embroidered silk ribbons twined around them, and other books and things. She sighs in remembrance of former, for her, better times!

The next few lines are confusing—I am not sure whether it’s the translation or it was as confusing in the original:

Yes, it’s true, the Jew misbehaved in Hesse in former times. He often contributed to his own pauperization by profiteering and Gueterschlaechterei, etc. (?) Nowhere else the antisemitism of National Socialism is carrying greater justification than in Hesse. But these ordinary harmless people scattered here and there in small villages for many a long year, who still belong to orthodox Judaism and whose integrity and strength of character…cannot be denied—they just belong to the colorful German nationhood.  It would leave a void if it were weeded out completely.

It seems that, on the one hand, the writer is condoning anti-Semitism, but on the other is praising the Jewish residents of the area and admitting that it would be a loss for the community if they were “weeded out completely.” I wish I knew more about this source; perhaps Julia can give me more information about it.

At any rate, today there are no Jews in Sielen. Julia told us that the house depicted below was where the last Jew in Sielen lived until the 1930s when at some point he was dragged from the house and beaten.

When I asked Julia and Hans-Peter what people did for a living today in these little villages, they said many are employed in Kassel (there is a Volkswagen plant near Kassel) while some are tradespeople.  Not many are farmers any more.

We walked to where the synagogue once was and stood outside what is now a large home. We walked around the corner, looking for some indication of where the entrance had been, and as we stood outside, a man came out.

Section to left was the old synagogue in Sielen. Compare to photo above. 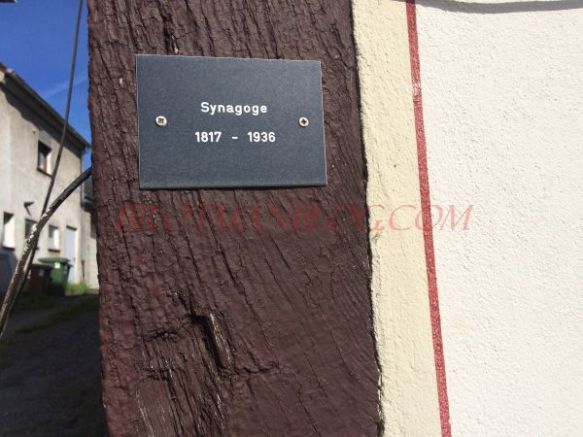 After our experience with the angry man in the marketplace, I was concerned that this man also was going to yell at us for loitering in front of his house. But instead he asked what we were doing, and when Hans-Peter and Julia explained, he became very interested, asking more questions.  He introduced himself to us (his name, Braun Rode, was on the beer sign outside the house—perhaps it is also a tavern).  He and his wife had lived in the house for 40 years.  And he was very happy that we had come to see it.

Then his wife came out and offered us all something to drink.  When we all declined, she returned with a book about the former synagogues in Germany and showed us the picture of their house when it had been the synagogue (see above).

These two people, who did not know us at all, could not have been nicer.  Herr Braun Rode insisted that we take photographs with him in front of the house and send him a copy (which Julia did).  When we said goodbye, he said to us in German to send regards to America. Once again, we were left with a very positive and warm feeling about the people in Germany.

We then drove to the cemetery that lies outside the village up a rather steep hill.  It is hard to imagine how people from Sielen and the other nearby villages managed to get the bodies of the deceased to these cemeteries.

Looking down the hill from the cemetery to the road

There were not a lot of stones in the cemetery, and I looked at each one several times, hoping to find my great-great-grandfather Levi Schoenthal, or any other Schoenthal, but I had no luck. Some of the stones are completely eroded, and others are only in Hebrew and were extremely difficult to read. Julia had a transcription of the stones, and there was this one, which I had previously found in my research:

Thanks to the helpful people in the Tracing the Tribe Facebook group, I know that that translates as “Chaim Schoenthal from Sielen died 7 Nissan 5634,” or March 25, 1874, which is four days before the date I had for Levi’s funeral (the actual date of death was not legible in the death record).

The name as transcribed confused me since it was not Levi, but Chaim was probably his father Heinemann’s Hebrew name, so I think the transcriber could not read Levi’s own first name and transcribed only the patronym. It probably said “Levi ben Chaim Schoenthal.”

But even with that transcription, we could not find the actual stone.  The transcriptions were done over 30 years ago, so the stone must have badly eroded since then. I examined each stone, hoping to find an inscription that contained the name of my great-great-grandfather.  But it was not to be. 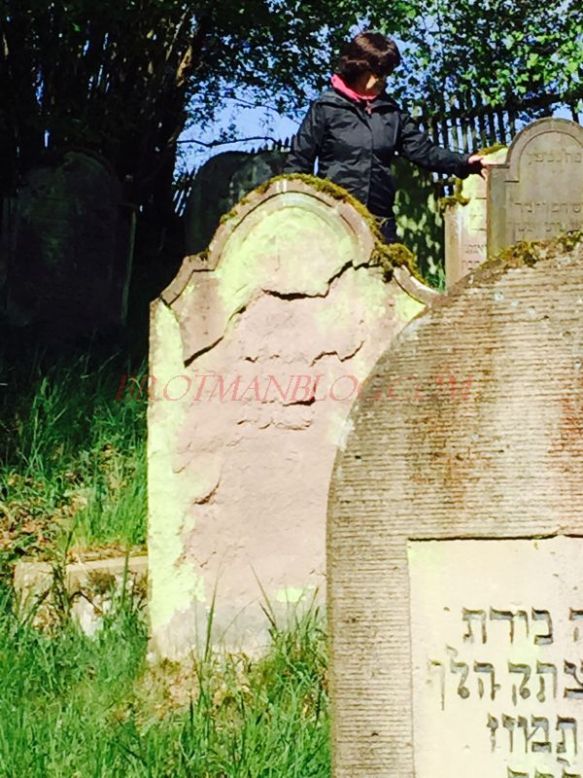 Sielen cemetery. I now think that the very eroded sign on the left could have been where Levi Schoenthal was buried.

Or maybe this one? 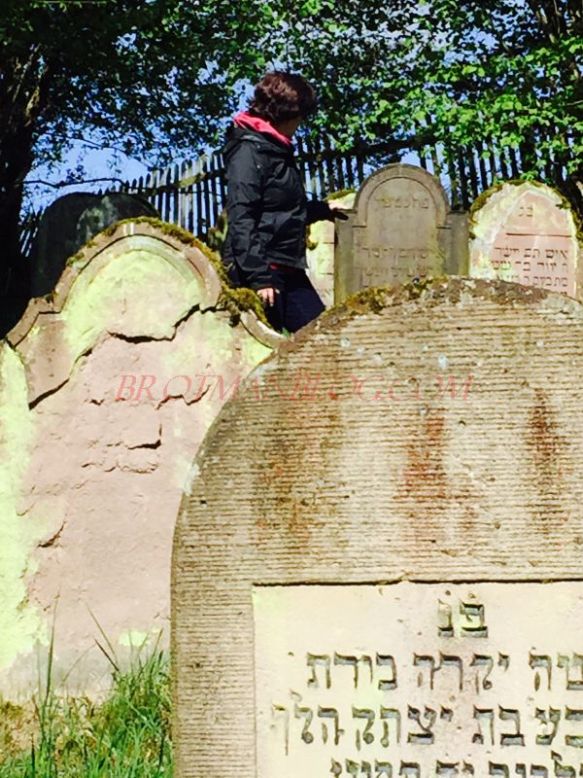 Although I was disappointed not to find the stone for my great-great-grandfather, it had been a great morning, meeting not only Hans-Peter and Julia, but also the friendly couple who live in the house which was once the synagogue.  Sielen is a tiny jewel with a long history, and it might have been a good and comfortable place to be a child growing up.  But  now I better understand why my great-grandfather Isidore Schoenthal and all his siblings left the village.  There was not much there to support a young adult who wanted to go out on his or her own.

As Julia pointed out, Arieh means lion in Hebrew and thus may have been the Hebrew equivalent to Leon or Leo and paired with Levi as his full name.

Thanks again to Julia for finding the stone and providing me with a better transcription of its inscription.

28 thoughts on “Sielen: The Tiny Ancestral Home of the Schoenthals”