On May 10, after visiting Jesberg and saying goodbye to the Kassel region, we drove south towards Wurzburg.  Wurzburg was actually not originally on our itinerary.  In planning our trip, I had initially confused the Schopfloch in Baden with the Schopfloch in Bavaria and made plans to stay in Stuttgart to be closer to the Baden Schopfloch (that is, the wrong one).  Fortunately I discovered this mistake in time, cancelled the Stuttgart reservation (but still had to pay….grrr), and made a new reservation in Wurzburg.  I knew nothing about Wurzburg except that in studying the map, it was the closest bigger city I could find to the Schopfloch in Bavaria where my Nussbaum ancestors had lived.  It was meant to be simply a one night stopover before we headed to Schopfloch.

As we drove south and entered Bavaria, the landscape changed from the open fields and hills we’d been seeing throughout the Rhine-Palatinate region and the Hessen region.  Now we saw forests of tall trees on either side of the Autobahn.  It was a dramatic change in scenery.  We arrived in Wurzburg around 4 pm and checked into our hotel, the Hotel Wurzburger Hof, having no idea what to expect of the hotel or the city.

Well, this quickly became our favorite hotel of the entire trip.  The young woman at reception checked us in and then offered us a free glass of wine.  On top of that she told us that they had given us a room with a private roof deck overlooking the city. We have no idea how we managed to get that room, but we didn’t ask questions.  We took our bags and our wine up to our room, dropped our bags, and took the wine out to the roof deck. It was big enough to host a party for twenty people, and there was plenty of patio furniture out there.  The room itself was also very comfortable, clean, and beautifully furnished.  We sat and relaxed, perhaps the first time in our trip that we had no appointments or sites to see or cemeteries to visit.

Our roof deck at the Hotel Wurzburger Hof 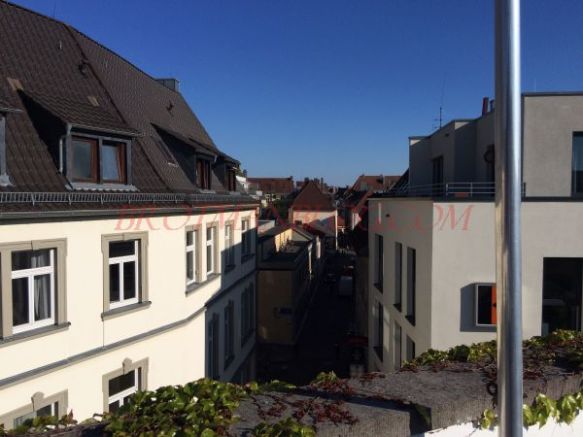 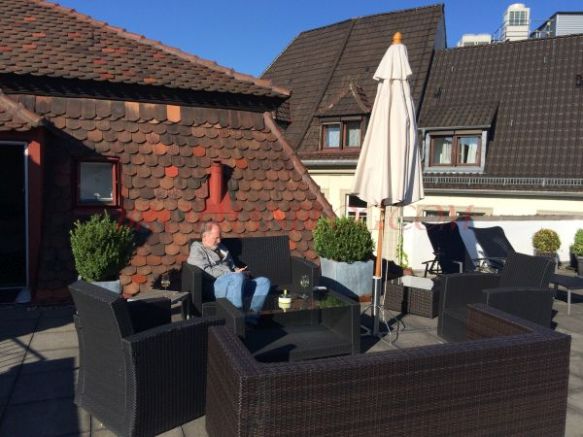 When it was time to eat, we asked the receptionist for dinner suggestions, and she recommended two restaurants on the river. “There’s a river?” I asked.  She smiled and told us how to get to the restaurants on the Main River.  We picked the Italian one (of course) and had a table overlooking the river; the food was as good as the view.

One of the many good Hefeweizen beers I had in Germany 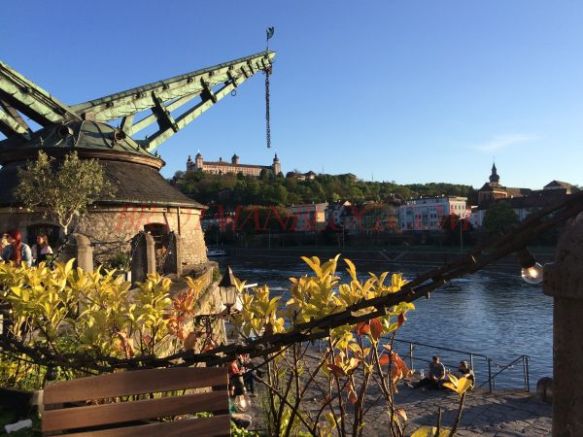 After dinner we strolled around a bit and noticed that, as in the restaurant, the streets were filled with young people. When we returned to the hotel, we asked the evening clerk why there were so many young people.  “For the university,” he responded.  “There’s a university?” I said. 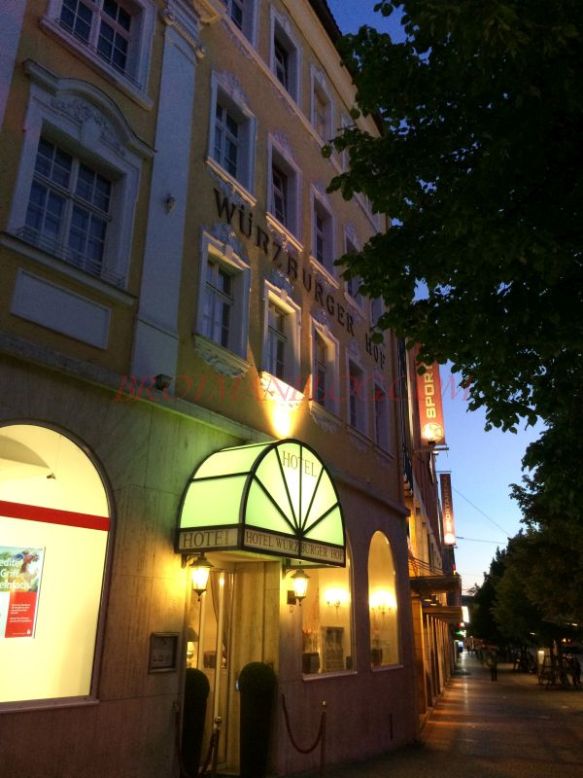 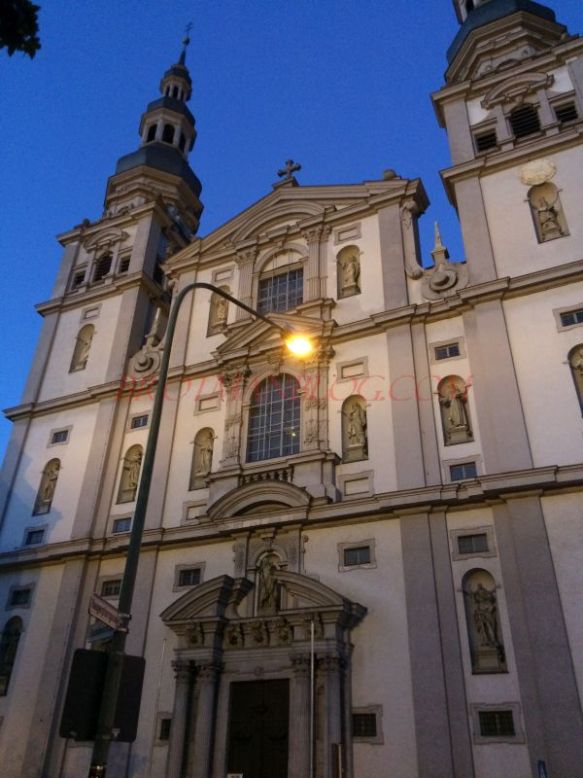 Obviously I needed to do some research about this city.

We were glad that we did not have to rush out the next morning for Schopfloch, as our appointment with Jutta Breittinger, our Schopfloch guide, was not until 2 pm.  We enjoyed a leisurely breakfast in the hotel, and then, with a walking tour map in hand, we set off to see this city that we’d so quickly fallen in love with the night before.

The first place on our tour was right across from our hotel: the Juliusspital, a hospital and retirement home founded in 1576 by Julius Echter, the bishop of Wurzburg.  The expansive Baroque building was designed by Italian architect, Antonio Petrini. It was built to take care of the poor and sick people of the area and still functions as a hospital today.  From the outside and from the grounds inside its courtyards, however, you would think this was a palace. 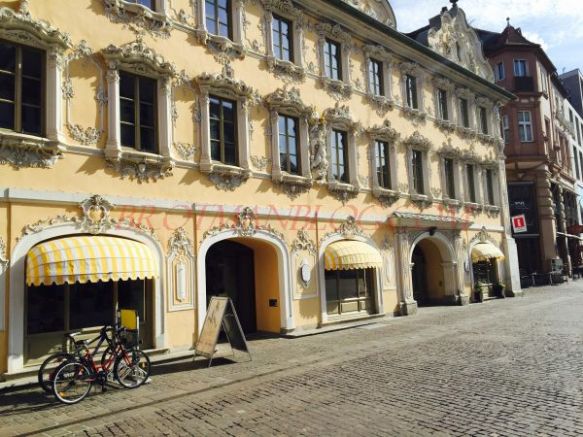 Garden in the Juliusspital courtyard

We then followed our map, strolling past a shopping district (notice that T J Maxx is called T Z Maxx) towards the market place where the Marien Chapel is located.

As we turned the corner to enter the market square, we immediately noticed this stunning church and the beautiful architecture that surrounds the square.  The Marien Chapel was built in the 14th century on grounds that were once a synagogue, according to Wikipedia.  Although Wurzburg, like Mainz, Bingen, and Cologne, suffered a lot of damage from Allied bombing during World War II, the chapel and many other places were reconstructed after the war and restored to their original appearance.  It is quite remarkable, inside and out. 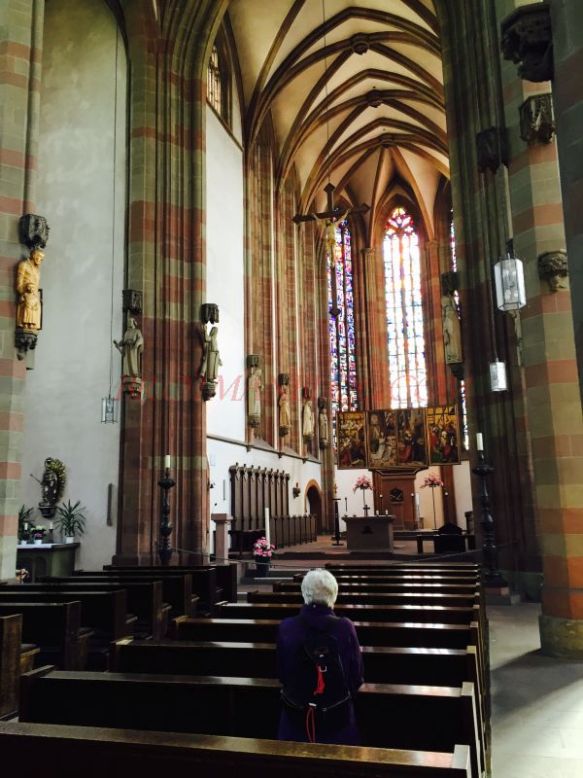 From there we walked to the Wurzburg Dom, the fourth largest Romanesque church in Germany. It is also a gorgeous building.  At this point we were both quite dazzled by all the beauty in this small city (the population is under 200,000, as compared to two million in Cologne).  The Dom was built in the 11th century and remodeled and extended numerous times over the centuries.  It also suffered severe damage during World War II, and renovations were not completed until 1967.  According to this site, when they remodeled the building, they chose to restore the interior to its Romanesque origins and did not include some of the Baroque elements that had been added in the 17th century.  The interior is white and surprisingly bright unlike most cathedrals I’ve seen.

Perhaps the best known attraction in Wurzburg is the Residenz, where we went next. It is a UNESCO World Heritage site. The Residenz was built in the eighteenth century as a palace for the “bishop-princes” of Wurzburg; it was designed by Balthasar Neumann.  It reminded me of the Schonbrunn Palace in Vienna—-long halls of room after room after room, huge common spaces, elaborate adornments on the walls and ceilings, and a wide and gracious red-carpeted staircase. Frescoes by Tielpolo cover the ceiling over the wide open space above the staircase.  Behind the palace are beautiful gardens filled with flowers and green spaces with benches. (We weren’t allowed to take photos inside.) 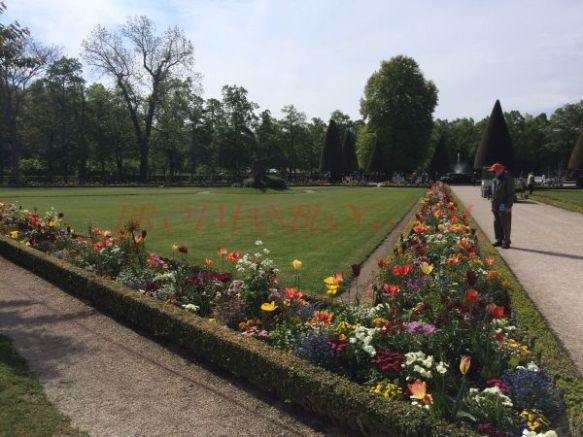 Gardens at the Residenz

The Residenz was also severely damaged during the war and was, like the Dom and the Marien Chapel and much of Wurzburg, rebuilt after the war.

After touring the Residenz, we decided to stroll back across the city through the streets where the university is located to the Main River. We walked along the river to the Alte Mainbrucke (Old Main Bridge), which spans the river.  We walked across the river, looking back to see the towers of the Dom lined up with the bridge. 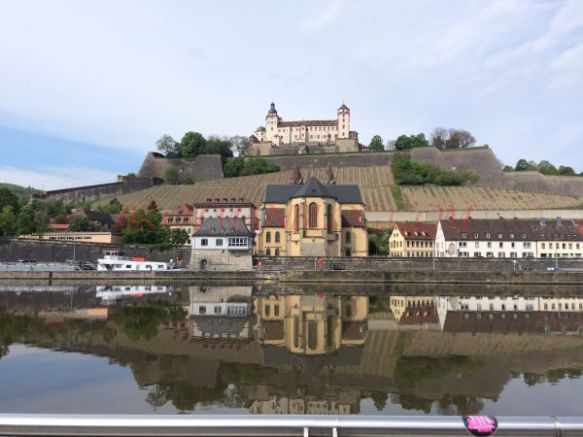 View across the Main River from Wurzburg

The towers of the Dom from the Old Bridge 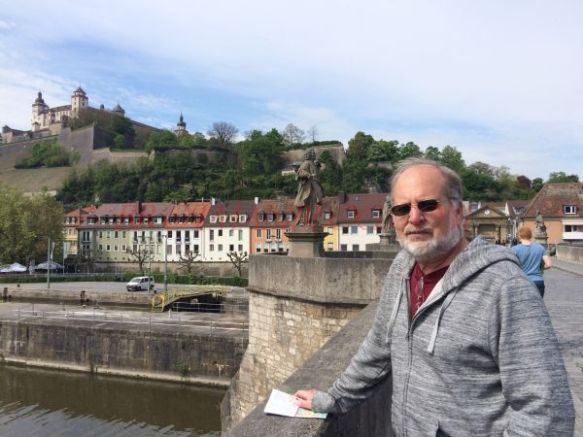 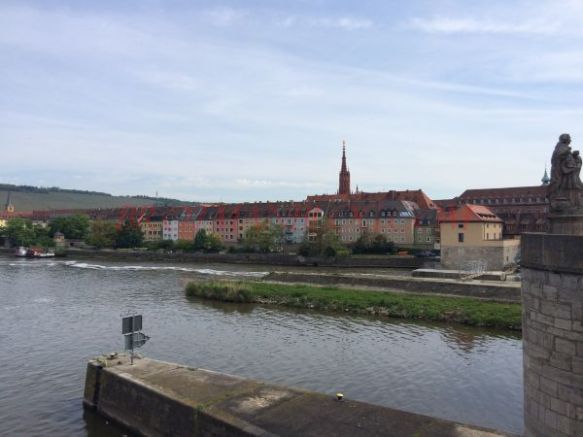 After a lunch from a bakery on the market square we reluctantly left this beautiful city behind.  We had been there less than 24 hours, and we both wished we had another day to spend in Wurzburg.

Marktplatz in Wurzburg (notice the style of the buildings some historic restoration, others in modern utilitarian style

23 thoughts on “Wurzburg: Our Brief but Wonderful Visit to this Beautiful City”